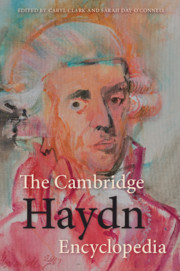 For well over two hundred years, Joseph Haydn has been by turns lionized and misrepresented - held up as celebrity, and disparaged as mere forerunner or point of comparison. And yet, unlike many other canonic composers, his music has remained a fixture in the repertoire from his day until ours. What do we need to know now in order to understand Haydn and his music? With over eighty entries focused on ideas and seven longer thematic essays to bring these together, this distinctive and richly illustrated encyclopedia offers a new perspective on Haydn and the many cultural contexts in which he worked and left his indelible mark during the Enlightenment and beyond. Contributions from sixty-seven scholars and performers in Europe, the Americas, and Oceania, capture the vitality of Haydn studies today - its variety of perspectives and methods - and ultimately inspire further exploration of one of western music's most innovative and influential composers.

'This is a fascinating, wide-ranging volume written by leading Haydn scholars from around the world. The simultaneously substantive and incisive essays, a pleasure to read as they enlighten at every turn, ably reflect and build on recent Haydn scholarship. In short, The Cambridge Haydn Encyclopedia is essential reading for all musicians - performers, listeners, scholars, critics - experienced and inexperienced alike, who want better to understand and appreciate Haydn and his remarkable musical achievements.'

'… this encyclopedia is replete with thoughtful information on the significance of Haydn to his times and on how aspects of his times - including the Enlightenment overall - impacted his development and production. Illustrations, including musical excerpts, are scattered throughout, with cross-references embedded in the narratives … Highly recommended.'

'A paradise for 'dipping in' at random and seeing where the journey takes you.'

'Four years in the making, this book is a significant and welcome addition to Haydn studies. By adopting the same ethos as the great encyclopaedists of the past, the editors have opened up some fresh areas of musical knowledge to modern readers. The best work from previous centuries is included, along with fresh topics related to our own times. So, while some entries, such as acoustics and counterpoint, are subjects that the reader would naturally expect to encounter, others - notably disability and gender - reflect the new research pathways that young scholars are choosing to follow today.'

'This major book is a treasure trove, a cabinet of wonders … a Wiki-Haydn … in an inspired touch, short entries, ranging in length from two to five pages, are punctuated by seven much longer ‘conceptual essays’, like pillars in a temple, which both tie together a cluster of other entries and fly their own kites … We can be grateful to Clark and Day-O’Connell for assembling such a rich and stimulating, if necessarily pointillist, portrait of this joyful composer.'