British Prisoners of War in Europe in the Second World War 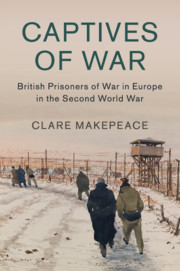 This is a pioneering history of the experience of captivity of British prisoners of war (POWs) in Europe during the Second World War, focussing on how they coped and came to terms with wartime imprisonment. Clare Makepeace reveals the ways in which POWs psychologically responded to surrender, the camaraderie and individualism that dominated life in the camps, and how, in their imagination, they constantly breached the barbed wire perimeter to be with their loved ones at home. Through the diaries, letters and log books written by seventy-five POWs, along with psychiatric research and reports, she explores the mental strains that tore through POWs' minds and the challenges that they faced upon homecoming. The book tells the story of wartime imprisonment through the love, fears, fantasies, loneliness, frustration and guilt that these men felt, shedding new light on what the experience of captivity meant for these men both during the war and after their liberation.

‘Clare Makepeace is a rare historian able to combine depth of knowledge with exquisite sensitivity. By delving into the intimate lives of prisoners of war, Makepeace reveals the primacy of domestic ties in the inner lives of these captives, and emphasises the range and complexity of different masculinities. The book is a ‘must read’, not only for people curious about war and captivity, but also for anyone interested in the history of everyday lives.'

'This is a profoundly important new history of Second World War captivity. Through the experience of British prisoners of war, Clare Makepeace provides a groundbreaking appraisal of the impact of war upon masculine identity. A tour de force addition to the cultural history of modern warfare.'

‘Captives of War offers a rare combination of impeccable scholarship coupled with deep humanity for the men who lived through the history. Captives of War is teeming with vivid stories and compelling voices. Every page adds another level of understanding to what it must have been like to experience captivity. This riveting account will appeal to anyone fascinated by history - but also to any reader interested in how we respond to adversity.'

‘By weaving together the diaries and letters of those involved with official sources, and with insights from psychology, sociology and history, Clare Makepeace shows what everyday captivity entailed for the many thousands of British servicemen captured by the Axis powers behind barbed wire. Carefully constructed and well-written, Captives of War breaks new ground in the understanding of the social and cultural history of British prisoners of war in the Second World War.'

‘A fascinating, compassionate and evocative exploration of the highs and lows of life in captivity, told directly and contemporaneously by the men experiencing it.'

'A pioneering study … an invaluable reference for historians and family researchers alike.'

Mark Simner Source: Who Do You Think You Are

'… a poignant, at times searing human story … This pioneering examination is remarkable for the richness of its source material, depth of scholarship, and sensitive analysis.'

'… an extremely interesting read, which I would recommend to all psychologists and others interested in the psychology of war, warfare and survival psychology.'

'… it is the kind of topic that needs a good deal of rigour. Happily the author matches that rigour with empathy and with a clear sense of how her work will meet its objective of filling a gap in the literature. She succeeds more than admirably.'

'To delve into this emotional world, Makepeace draws upon personal narratives composed by POWs during their captivity including, 40 diaries, 25 logbooks (small notepads used like a scrapbook), and 26 sets of correspondence, all of which is catalogued in an appendix outlining the details of each man. Her analysis of these sources is holistic in that they are not only viewed as records of captivity, but also part of how the experiences documented within them were shaped.'

'… this will remain a go-to book for social, cultural and military historians alike.'

‘Makepeace offers a major and stimulating contribution to our understanding of war captivity in Europe. In this respect, Captives of War should be part of any analysis of history of British POWs in the Second World War. Its methodology and approach opens the way for future scholars working on other conflicts and the category of POWs and also on postwar history of prisoners … Captives of War is thus recommended to anyone interested in the cultural history of Britain during the Second World War and more broadly to cultural history of warfare and the study of personal narratives.’

‘… demonstrates a way of using personal narratives that offers great benefits for cultural historians seeking to study and understand people’s experiences of war.’