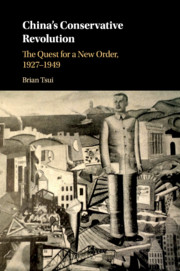 In this ambitious examination of the complex political culture of China under Guomindang rule, Brian Tsui interweaves political ideologies, intellectual trends, social movements and diplomatic maneuvers to demonstrate how the Chinese revolution became conservative after the anti-Communist coup of 1927. Dismissing violent struggles for class equality as incompatible with nationalist goals, Chiang Kai-shek's government should, Tsui argues, be understood in the context of the global ascendance of radical right-wing movements during the inter-war period. The Guomindang's revolutionary nation-building and modernization project struck a chord with China's reformist liberal elite, who were wary of mob rule, while its obsession with Eastern spirituality appealed to Indian nationalists fighting Western colonialism. The Nationalist vision was defined by the party-state's hostility to communist challenges as much as by its ability to co-opt liberalism and Pan-Asianist anti-colonialism. Tsui's revisionist reading revisits the peculiarities of the Guomindang's revolutionary enterprise, resituating Nationalist China in the moment of global radical right ascendancy.

'In this incisive volume, Tsui conclusively demonstrates that the Nationalists’ quest for 'capitalism without capitalism' - or fascism - was the central feature of the ideology and organization of the politics of conservatism in China’s Republican period. This study is a meticulous work of history; it is also indispensable for our contemporary moment.'

'In this study of the 1930s, Brian Tsui reshapes our understanding of the radicalization of Chinese politics and culture. He situates China’s 'conservative revolution' in the context of global history, showing how the Nationalists valorized the nation in a language of fascist modernity while forging bonds with anticolonial movements across Asia. If the conservative revolution failed in its own incoherent terms, it nonetheless left permanent marks.'

'In his book, Brian Tsui expands discussion of nationalism and aesthetics at the core of the conservative revolution, moving from the United Front into the wartime period.'

'Brian Tsui’s outstanding new book is a welcome piece of scholarship that takes scholars back to the legacy of 1927 … Understanding China’s mid-twentieth century revolution in these terms gives Tsui’s book a startling freshness. Its contemporary relevance is just one element of its quality; in the depths of its research and complexity and seriousness of its historical insights, it is a deeply significant work.'

'The book’s thoroughly theoretical discussion is a brilliant and inspiring read for those who are interested in modern intellectual currents and political ethics.'

'… [Tsui’s] subtle treatment of the ‘conservative revolution’ in theory and practice reveals a fascinating set of connections between Confucian order, mass politics and global change.’

'The book will be the authoritative work on this for a long time to come.'