Home
The Comparative Politics of Education

The Comparative Politics of Education

Teachers Unions and Education Systems around the World 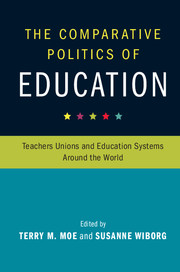 Public education is critically important to the human capital, social well-being, and economic prosperity of nations. It is also an intensely political realm of public policy that is heavily shaped by power and special interests. Yet political scientists rarely study education, and education researchers rarely study politics. This volume attempts to change that by promoting the development of a coherent, thriving field on the comparative politics of education. As an opening wedge, the authors carry out an 11-nation comparative study of the political role of teachers unions, showing that as education systems everywhere became institutionalized, teachers unions pursued their interests by becoming well-organized, politically active, highly influential - and during the modern era, the main opponents of neoliberal reform. Across diverse nations, the commonalities are striking. The challenge going forward is to expand on this study's scope, theory, and evidence to bring education into the heart of comparative politics.

'This edited volume is a truly exceptional piece of scholarship, bringing together leading scholars in the comparative study of education. The individual chapters provide an in-depth analytical perspective on education reforms in different countries both in the [Organisation for Economic Co-operation and Development] and beyond. Terry M. Moe and Susanne Wiborg have masterfully managed to integrate the individual chapters into an overarching theoretical framework. In doing so, their contribution will have a lasting and significant impact on the agenda of the growing research field of the comparative study of the politics of education.'

'The Comparative Politics of Education will do a great deal more than just command the attention of scholars of education, political science, and public policy. It will put them into productive conversation. In illuminating reports from the field and the brilliant synthesis of Moe and Wiborg, we witness vested interests working in diverse settings to shape politics and political institutions to their own advantage. With sweeping and probing insight, this volume promises to shake up disciplinary boundaries and carve out new space for the comparative study of education.'

'Terry M. Moe and Susanne Wiborg are correct: educators seldom study politics and political scientists rarely study education. This book is brings light to the connection between the two and is essential reading for anyone interested in education reform.'

'The Comparative Politics of Education provides a terrifically useful framework for understanding the role of teachers Unions across a wide range of countries, explaining why education reform has worked better in some countries than others. It is a superb and unique source for anyone interested in this critical subject.'

'Their detailed case studies of teacher union influence in Europe, the United States, as well as Japan, Mexico, and India offers an encompassing and thorough analysis that contributes considerably to our understanding of the politics of education. A must-read for anyone interested in education.'