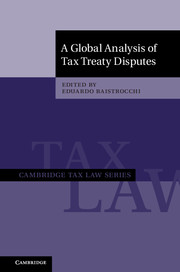 This two-volume set offers an in-depth analysis of the leading tax treaty disputes in the G20 and beyond within the first century of international tax law. Including country-by-country and thematic analyses, the study is structured around a novel global taxonomy of tax treaty disputes and includes an unprecedented dataset with over 1500 leading tax treaty cases. By adopting a contextual approach the local expertise of the contributors allows for a thorough and transparent analysis. This set is an important reference tool for anyone implementing or studying international tax regulations and will facilitate the work of courts, tax administrations and practitioners around the world. It is designed to complement model conventions such as the OECD Model Tax Convention on Income and on Capital. Together with Resolving Transfer Pricing Disputes (2012), it is a comprehensive addition to current debate on the international tax law regime.

'This will be a crucial addition to the practitioner’s library shelves. Both in international tax planning, and in controversy work, being able to bring to bear the decisions of foreign courts on tax treaty issues is often a powerful technique. Even from an early review of the proofs, I found relevant materials for current ‘live’ work in the areas of permanent establishments, beneficial ownership and treaty override. The global case law taxonomy and 'golden bridge' indexing assist with navigation and will provide an interesting evolution of treaty dispute patterns in future editions.'

'This two-volume book deserves to be mentioned because of its exceptionally rich content and its original approach. … At a time of harmonization of international tax law at a global level, this treatise is particularly welcome.'

'The volume charts a new course and should be explored by professionals interested in international taxation and, in particular, by those working on dispute resolution pertaining to tax treaties.'

'This is an important addition to the international tax disputes literature containing interesting statistics, a useful categorisation of cases from different countries on a particular topic, and a wide range of country chapters.'

'The main interest of the treatise lies in its comprehensiveness as well as in its critical approach to the subject. It is a very ambitious work containing the largest compilation to date in one single book of cases dealing with controversies related to double taxation treaties. Roughly 1,600 cases are cited related to the application of treaties listed both country-by-country and thematically. The cases are listed in the treatise’s first volume, which offers a classification based on various criteria, i.e., the country where the controversy takes place and, also, in the so-called 'Golden Bridge', an analytical listing of cases sorted out according to the precepts of the OECD Model Convention. This listing, along with the chart on page 1443, offers a unique picture of the type of controversies that have been resolved within the 1923 to 2015 timeframe covered by the treatise.'

'Baistrocchi’s collection is a must-have for readers interested in tax treaties. It might aptly be referred to as 'the definitive encyclopedia on tax treaty case law'. Work by 42 authors spans 27 countries and provides an analysis of over 580 tax treaty cases. … This review does not do justice to the rich resource that this double volume provides for tax practitioners, policy makers, and scholars with an interest in tax treaty disputes. It is a stand-out contribution in the area.'

‘Both Eduardo Baistrocchi and his publisher Cambridge University Press are to be congratulated for having the courage, energy and discipline to produce this excellent publication. A book, even in two volumes, with the title A Global Analysis of Tax Treaty Disputes might ordinarily seem to be an over-ambitious project but this publication is a triumph. There are both scope and scale in this book which makes it unique in tax academic literature. The publication will also be immensely valuable in taxation practice, administration and jurisprudence for reasons discussed below. In short, the book is a remarkable reflection of legal analysis and likely to be of huge assistance in international tax disputes, but more generally in tax legal scholarship.’

‘A Global Analysis of Tax Treaties Disputes helps in identifying both promises and risks, and is an invaluable resource for policymakers in designing their next move as well as for the future assessment of new policies.’

‘… the book contributes … [to] a better understanding of the metalanguage that has been developed in … International Tax Law. It also arrives at a good time because it marks the end of a period (the pre-BEPS period), offering a safe base that serves as a starting point for the analysis of the international scenario that will arise from now on.'

'… after leafing through the two heavy volumes and reading … some chapters - and in particular the whole of Part V of the second volume, I was completely captivated by what I can only describe as one of the seven wonders of the international tax world. … Eduardo Baistrocchi, professor at Torcuato di Tella University in Buenos Aires and the London School of Economics, along with his team of colleagues and assistants, have created an original academic monument of colossal proportions.'

‘The country-by-country analysis covers around twenty countries, including member countries from the OECD and the BRICS. Each author begins by very briefly recalling the fiscal context of the country, then describes and summarizes the CPDI policy, the legal instruments in place and the judgments he considers important. The study covers a large number of countries and is therefore not exhaustive. The analysis nevertheless gives a good overview of the situation in each country.’