Heroes and Legends of Fin-de-Siècle France 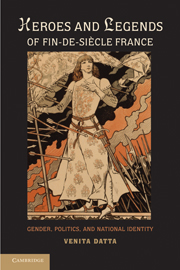 In Heroes and Legends of Fin-de-Siècle France Venita Datta examines representations of fictional and real heroes in the boulevard theater and mass press during the fin de siècle (1880–1914), illuminating the role of gender in the construction of national identity during this formative period of French history. The popularity of the heroic cult at this time was in part the result of defeat in the Franco-Prussian War in 1870, as well as a reaction to changing gender roles and collective guilt about the egoism and selfishness of modern consumer culture. The author analyzes representations of historical figures in the theater, focusing on Cyrano de Bergerac, Napoleon and Joan of Arc, and examines the press coverage of heroes and anti-heroes in the Bazar de la Charité fire of 1897 and the Ullmo spy case of 1907.

‘Is there anything new to be learned about the construction of French national identity in the decades before World War I? Datta’s thoroughly engaging book shows that there is by exploring the cult of heroes of the day. This strikingly original study finds that the boulevard theater and mass press offered an eager public, anxious about meeting national challenges, a golden age of heroism … Carefully reading the evidence not only to uncover France’s culture wars but also to detect less frequently noted areas of national cohesion, Datta makes many surprising revelations, not the least of which is how many cracks there were in the defense of gender orthodoxies. The success of the Third Republic in overcoming poisonous hatreds and preparing France for its life and death struggle comes into focus with this important investigation.’

‘Do wounded democracies riven by partisan passions hunger for heroes? France’s Third Republic, born of the defeat of 1870–71, did, enshrining a pantheon of great men and women whose qualities - panache, saintliness, grandeur - promised to heal a nation divided. Such is the argument of Venita Datta’s engaging new book, and it is a claim that has lost none of its relevance in our own post-9/11 era.’

’Venita Datta’s masterful book gets to the heart of the way heroism and historic symbols of French national unity were dramatized in the press and in theaters at the fin de siècle, mitigating, if not healing, the many political and cultural divisions of the era, while preparing the nation for war.’

‘Venita Datta’s fascinating, impeccably researched, and beautifully written book makes an important contribution to the fields of history and gender studies. Datta insightfully analyzes constructions of heroism though real-life and fictionalized heroes and legends … In Datta’s deft hands, the theater, melodrama, the press, and literature become politically significant as they build a national identity, but at the same time they reveal cracks in the strictly delineated gender categories and in religious, political, and class unity. This engaging book, like the theatrical and literary performances that Datta acquaints us with, will appeal to a broad and divergent audience.'

‘Through a careful analysis of five causes célèbres between the 1890s and the First World War, Venita Datta’s new book probes the many levels on which the cult of heroism circulated in the French cultural imagination. By revealing a series of tensions and pretensions surrounding the virility of men, the potential of women, and the meaning of Frenchness, Datta shows how conflicting ideas about the hero divided the very nation they aimed to consolidate. This is a fascinating and indispensable contribution to our understanding of culture and politics at the fin de siècle.’

Christopher E. Forth - author of The Dreyfus Affair and the Crisis of French Manhood

‘With verve and humor, Venita Datta considers the most colorful characters of the French fin-de-siècle stage, among them, Cyrano de Bergerac, Napoléon, and Joan of Arc. Using the lens of gender, she deftly explores how these ‘heroes’ helped to shape French national identity in a crucial period of transition. In doing so, she reminds us of the enormous historical importance of the theater, its power not only to debate politics but also to unite a nation on the eve of war.’

'Gender historians and Third Republic specialists will find much of interest in Datta’s effort to bring together feminism, the 'crisis of masculinity', and the national politics of the fin de siècle. Chapters of this lucidly written and engaging book might also be of great use in undergraduate classrooms.'