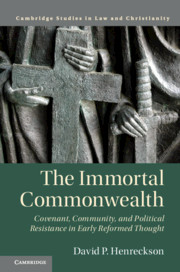 In the midst of intense religious conflict in the late sixteenth and early seventeenth century, theological and political concepts converged in remarkable ways. Incited by the slaughter of French Protestants in the Saint Bartholomew's Day Massacre, Reformed theologians and lawyers began to marshal arguments for political resistance. These theological arguments were grounded in uniquely religious conceptions of the covenant, community, and popular sovereignty. While other works of historical scholarship have focused on the political and legal sources of this strain of early modern resistance literature, The Immortal Commonwealth examines the frequently overlooked theological sources of these writings. It reveals how Reformed thinkers such as Heinrich Bullinger, John Calvin, Theodore Beza, and Johannes Althusius used traditional theological conceptions of covenant and community for surprisingly radical political ends.

'In The Immortal Commonwealth, David P. Henreckson navigates the oft-inordinately voluminous literature on Calvinist covenant theologies with the requisite dexterity, interpretive savvy and skills, not to mention much-needed patience to plow through these mostly forgotten and putatively esoteric treatises from an era, again, allegedly known for arid and atrophying Protestant scholastic discourses. Henreckson shows how the central theo-political idea of God as the covenanter has contributed to and ushered in the transformations of political theologies that pertain to Self, Society, and Savior in a refreshing way. It is truly worthy of the Augustinian dictum tolle lege!'

‘The Immortal Commonwealth is an impressive debut from a fine scholar. It skilfully combines theology, political thought, and social ethics in one volume. Henreckson creates a compelling historical narrative, before concluding with a chapter on contemporary ethical ramifications in relation to political resistance to tyranny. The application of historical ideas is sometimes a fraught exercise. However, the historical work in the volume is of a high standard and the author does not overstep the line in attempting to retrieve the ideas for today. This is an erudite contribution that deserves commendation.’

‘Henreckson’s work is especially valuable in three ways. First, on a prima facie reading, he has done solid historical and theological spadework in bringing together these largely forgotten figures to establish their significance as a theological tradition existing across Europe offering a coherent theology of covenant and community … Secondly, in his innovative reading of these sources, in which he interrogates them in both theological and political terms, Henreckson demonstrates the intellectual benefits which can be obtained by going beyond the more common disciplionarly narrow readings of medieval and early modern sources … Finally, his work is valuable, not only as an example of historical retrieval and interdisciplionary analysis, but also as constructive theology.’