Home
The Perpetual Immigrant and the Limits of Athenian Democracy

The Perpetual Immigrant and the Limits of Athenian Democracy 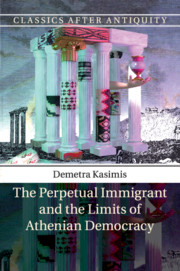 In the fifth and fourth centuries BCE, immigrants called 'metics' (metoikoi) settled in Athens without a path to citizenship. Galvanized by these political realities, classical thinkers cast a critical eye on the nativism defining democracy's membership rules and explored the city's anxieties over intermingling and passing. Yet readers continue to treat immigration and citizenship as separate phenomena of little interest to theorists writing at the time. In The Perpetual Immigrant and the Limits of Athenian Democracy, Demetra Kasimis makes visible the long-overlooked centrality of immigration to the originary practices of democracy and political theory in Athens. She dismantles the interpretive and political assumptions that have led readers to turn away from the metic and reveals the key role this figure plays in such texts as Plato's Republic. The result is a series of original readings that boldly reframes urgent questions about how democracies order their non-citizen members.

‘The Perpetual Immigrant and the Limits of Athenian Democracy expands the frontier of critical democratic theory by offering original and insightful readings of Plato's political philosophy, Euripidean tragedy, and forensic oratory, Demetra Kasimis' probing analysis of the ‘precarious proximity' of metoikoi - long-term non-native residents of ancient Athens - reveals much about classical political thought, Athenian history, and the entanglement of democratic ideals with nativist impulses. This book is both timely and a work for the ages. It has a great deal to offer to contemporary political theorists and classical historians alike. It should be read, pondered, and debated by everyone concerned with the contested category of democratic citizenship.'

‘Theorizing democratic inclusion and exclusion together, The Perpetual Immigrant and the Limits of Athenian Democracy brings to light the ways in which understanding citizenship in Athenian political thought depends on interrogating the place of the metic. Attending to figurations of immigrant politics in texts by Euripides, Plato, and Demosthenes, Demetra Kasimis argues that political status - metic and/or citizen - is the uncertain and precarious performance of a naturalized distinction, a performance because, in truth, not natural at all. Full of provocative readings of the unstable place of the metic in polis life alongside shifts in the meaning of democratic citizenship, Kasimis's book offers a persuasive rejoinder to nativist readings of the ancient Greeks as well as to the nativist politics of our times.'

‘In Kasimis's striking revision, the metic's exclusion on the basis of blood based descent, reveals not the primitive past of ancient democracy, but the ever-present pull of nativism for stabilizing democratic equality. This is an enormously generative insight. In exposing the politicization of identity to be a constitutive effect of democratic politics, Kasimis attunes us to both the recurring appeal but also the inherent ambiguity of naturalized categories of membership - a point she pursues in a bold rereading of the critical purpose of The Republic. With great subtlety and sophistication, Kasimis shows us how this ambiguity calls forth practices of policing and scrutiny that shape and stratify the lived experience of democratic citizenship.'

‘Focusing on the inexplicably overlooked but nonetheless constitutively central role of the figure of metoikoi to both the practice and critical theory of Athenian democracy, Demetra Kasimis confronts interpretations of Plato that are not just taken for granted but which have served as fixed referents for generations of readers. She then proceeds not to amend or supplement such readings, but to turn them inside-out entirely, and in the process, to transform radically not only our readings of the classic texts, but also our fundamental understanding (historical and conceptual) of democracy itself. This book powerfully illuminates that democratic politics are always already metoikia - a politics of immigration, a politics of resident foreigners, a politics of participation and status, a politics of insider-outsiders, a performative politics, a (de)naturalizing politics, a politics of passing.'

'This theoretically supple and surprisingly timely book probes overlooked tensions internal to both the reality and the ideal of ancient Athenian democracy.'

'This is a challenging, but ultimately rewarding, book … Readers in Classical Studies and in Political Science will find much to ponder in this stimulating book.'

'Her interpretive approach is at once sophisticated and clear, offering a distinctive lens through which we can see the writers engaging critically with Athenian nativist politics.'