Invisible Women and the Criminalization of Motherhood 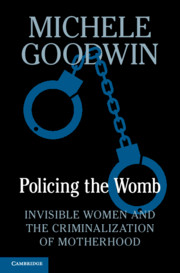 Policing the Womb brings to life the chilling ways in which women have become the targets of secretive state surveillance of their pregnancies. Michele Goodwin expands the reproductive health and rights debate beyond abortion to include how legislators increasingly turn to criminalizing women for miscarriages, stillbirths, and threatening the health of their pregnancies. The horrific results include women giving birth while shackled in leg irons, in solitary confinement, and even delivering in prison toilets. In some states, pregnancy has become a bargaining chip with prosecutors offering reduced sentences in exchange for women agreeing to be sterilized. The author shows how prosecutors may abuse laws and infringe women's rights in the process, sometimes with the complicity of medical providers who disclose private patient information to law enforcement. Often the women most affected are poor and of color. This timely book brings to light how the unrestrained efforts to punish and police women's bodies have led to the United States being the deadliest country in the developed world to be pregnant.

'Michele Goodwin’s Policing the Womb is a prerequisite to understanding the very real dangers posed by punitive state laws enacted under the guise of protecting women’s health, but which have instead criminalized women’s conduct during pregnancy, harmed women’s and girls’ health, and allowed unimaginable state interventions into women’s reproductive lives. Goodwin brings into sharp focus the compelling stories of the first targets and victims of these laws - primarily poor women and women of color - as she puts into context the risks to all women given the current political climate and Supreme Court’s jurisprudence. After you finish reading Policing the Womb and have quelled your anger, you will have no choice but to join one of the many local and national efforts to fight for women’s full constitutional and fundamental human rights.'

'Professor Goodwin has written the definitive examination of the disturbing and pervasive trend of policing pregnant women’s bodies. She skillfully draws on contemporary stories as examples that reflect how the establishment of legal rights for the unborn - so-called 'fetal protection laws' - inevitably define pregnant women’s bodies as objects of the state, to be controlled and punished. Informative and eye-opening, Policing the Womb makes a clear case for systemic change towards reproductive justice.'

'Based on extensive research and advocacy, Michele Goodwin vividly shows how the intensifying punishment of pregnant women in the name of fetal protection comes at a devastating cost to human health and freedom. Policing the Womb is an urgent call to end the dehumanizing practice of criminalizing pregnancy.'

Dorothy Roberts - author of Killing the Black Body: Race, Reproduction, and the Meaning of Liberty

'Policing the Womb is the roadmap we need right now to understand how to navigate the sandstorm of laws being created to claim ownership of our bodies. It brilliantly lays out all the ways politicians and the medical community are removing pregnant people from the most important decisions we will make about how best to manage our reproductive lives.'

'In this brilliant, shocking book, Michele Goodwin critiques recent laws figuring embryos and fetuses as legally independent 'persons'. Goodwin shows how criminalizing pregnant women who are incest survivors or suicidal or drug dependent or homeless exacerbates the brutal consequences of living with trauma, poverty or toxic environmental hazards. Shackling and imprisoning women - particularly poor, uninsured women of color - for failures to 'control' themselves has ushered in policies that place prosecutors and their surrogates in delivery rooms. Goodwin makes clear the heartbreaking irony of laws that, in the name of protecting life, divide women's bodies against themselves and implement profound violations of medical ethics, privacy, and ruptures in constitutional process and equal protection.'

'No one in America right now is more zealously policing the blurry boundaries between female bodies, the criminal and constitutional law, race, geography, and class than Michele Goodwin. Policing The Womb is a chilling and comprehensive survey of all the ways in which the law can be deployed to ensure that as womens' reproductive life becomes ever more complicated, American legal constraints become increasingly punitive. Goodwin's close reading of the complexity of female reproductive risk and peril, in a nation inching toward a modern-day Gilead, serves as a sobering warning about the current state of bodily freedom, autonomy and dignity, for women who are apt to be treated as vessels under the best of legal circumstances, and criminals under the worst. Anyone seeking to challenge that status quo will want to read this superb book and weep, and then get to work.'

'Michele Goodwin pathbreaking work, highlighting the fraught conditions of reproductive rights in the United States, continues with Policing The Womb. Meticulously detailed and richly told, this book should be required reading for anyone who cares about the future of reproductive health and gender justice.'

'For anyone interested in the American reality for many women, Policing the Womb is essential reading.'

‘Policing the Womb pleads with readers to put an end to this history of indifference.’

‘Policing the Womb is a must read for students and scholars of reproductive health, law, and criminal justice …’