Business, Elections, and Policymaking in Russia 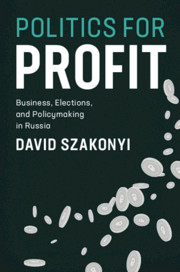 Businesspeople run for and win elected office around the world, with roughly one-third of members of parliament and numerous heads of states coming directly from the private sector. Yet we know little about why these politicians choose to leave the private sector and what they actually do while in government. In Politics for Profit, David Szakonyi brings to bear sweeping quantitative and qualitative evidence from Putin-era Russia to shed light on why businesspeople contest elections and what the consequences are for their firms and for society when they win. The book develops an original theory of businessperson candidacy as a type of corporate political activity undertaken in response to both economic competition and weak political parties. Szakonyi's evidence then shows that businesspeople help their firms reap huge gains in revenue and profitability while prioritizing investments in public infrastructure over human capital. The book finally evaluates policies for combatting political corruption.

'Businesspeople in politics? What could go wrong? Read this fantastic book if you want to know - and you should - how non-market strategy can transform politics and undermine policymaking.'

'Szakonyi’s research unearths a wealth of data - both qualitative and quantitative - to shine a bright light on the political strategies business people in Russia adopt, and on the outsized rewards they can reap. Politics for Profit is a model of empirical investigation and innovative theorizing. Anyone interested in how business translates money into power should read this book.'

'David Szakonyi makes an exceptional contribution to our understanding of the politics of post-Soviet Russia, and of other countries with over-controlled market economies, by bearing down on businesspersons who run for and gain control of political office. The theory is sharp, the empirics dazzling, and the execution smooth.'

'In his analysis of the intersection between business and politics, David Szakonyi makes two compelling arguments. First, members of the business community have strong incentives to run for political office. Why settle for a hit-or-miss strategy of influencing politicians and public policy from the outside when you could take the more direct route of running for political office? Second, while many politicians with a business background like to argue that they will restore efficiency to government, their impact - as the Russian case study makes clear - is quite the opposite. They do not just reduce competition by championing their businesses over others; they also invariably favor the interests of business over the interests of the citizenry.'

'The question of how business people influence politics has never been more topical. With careful arguments and original field research, David Szakonyi disentangles the relationship between money and power in Putin’s Russia. Politics for Profit offers numerous insights into the political economy of countries where rule of law is weak.'

‘Makes for a stimulating read and is a promise of great things to come.’

‘The author draws on a broad range of data, including numerous interviews with regional businesspeople. His rigorous scientific methods complement an enjoyable and convincing narrative.’

‘Szakonyi’s Politics for Profit is clear, well-organised and grounded in a wealth of evidence … [it] is an ambitious and thorough book that considerably advances existing scholarship on the influence of business in politics. Policymakers would do well to consider Szakonyi’s recommendations, and researchers should seize the opportunity to test his conclusions in other cases.’