Home
Violence in Latin America and the Caribbean

Violence in Latin America and the Caribbean 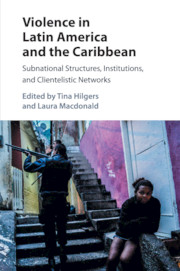 Violence in Latin America and the Caribbean is no longer perpetrated primarily by states against their citizens, but by a variety of state and non-state actors struggling to control resources, territories, and populations. This book examines violence at the subnational level to illuminate how practices of violence are embedded within subnational configurations of space and clientelistic networks. In societies shaped by centuries of violence and exclusion, inequality and marginalization prevail at the same time that democratization and neoliberalism have decentralized power to regional and local levels, where democratic and authoritarian practices coexist. Within subnational arenas, unique configurations - of historical legacies, economic structures, identities, institutions, actors, and clientelistic networks - result in particular patterns of violence and vulnerability that are often strikingly different from what is portrayed by aggregate national-level statistics. The chapters of this book examine critical cases from across the region, drawing on new primary data collected in the field to analyze how a range of political actors and institutions shape people's lives and to connect structural and physical forms of violence.

'Violence and fear have become a daily staple for Latin Americans. In Violence in Latin America and the Caribbean Tina Hilgers and Laura Macdonald have made a major contribution at two levels. In their introduction and conclusion they offer a superb scholarly synthesis of the phenomenon and the literature, while in the chapters they have compiled, the reader will find a good selection of topics and countries. A book that has all the ingredients to become a classic.'

'With its focus on meso-level analysis and the interstices of sociology and political science, Hilgers and Macdonald’s volume offers an important contribution to the literature on violence in Latin American and the Caribbean.'

'Hilgers and Macdonald´s edited volume offers an impressive overview of the character, causes and consequences of violence across the Americas. The region's staggering rates of homicide and violent crime are widely known. Yet the book's contributing authors dive below the national statistics to reveal the micro-determinants of violence. Along the way, they demonstrate how Latin American police can be violence entrepreneurs, how prisons often double as crime colleges, and the way widespread clientelism preserves an unequal and volatile status quo. The book is essential reading for public security and development specialists looking for a deeper understanding of the drivers of violence in Latin America and the Caribbean, and insights into how to avoid repeating the mistakes of the past.'

'Readers will come away from this worthy volume with greater appreciation of why violence in Latin America and the Caribbean has been so intractable - it is in fact a multifaceted problem, varying across the region, with many and diverse causes and implications.'

'A landmark in the study of violence.'

'By highlighting new relations between clientelism and violence, this book rightly draws our attention towards the power structures in which violence is immersed and to the ways in which it becomes lucrative to powerful actors … Violence in Latin America and the Caribbean is built around thought-provoking questions that help revitalize the study of the problem and the potential solutions.'