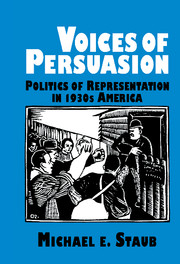 In this innovative study, Michael Staub recasts 1930s cultural history by analysing those genres so characteristic of the Depression era: Staub argues that several thirties writers - precisely because of their encounters with disinherited peoples - anticipated the dilemmas poststructuralist theory would identify; an awareness of the ambiguousness of historical truth, and the impossibility of representing reality without being complicit in its distortion. New interpretations of such canonised authors as James Agee, John Dos Passos, Zora Neale Hurston, John G. Neihardt and Tille Olsen are coupled with critical discussions of previously little-known works of ethnography, journalism, oral history and polemical fiction. This book will interest all who are concerned with the problematic relationship between representation and social reality and their mutual inextricability.

‘In this readable and engaging book, Michael Staub offers a corrective to those cultural histories that have seen Depression-era literature as having failed both politically and aesthetically because of its didactic sentimentality and topical politicism. Reexamining a wide range of cultural productions - documentaries, ethnographies, journal writing, folklore, and fiction - and the collaborations that produced them, he significantly extends the scope of previous studies … In a bold and refreshing move, Staub redirects our attention from the literate powers of elite editors to the oral powers of 'marginalized' speakers. In Voices of Persuasion, the subaltern can and does speak, and Staub shows us how to listen.’

‘Staub's thesis is original and important, for it both changes our view of the thirties and helpfully intervenes in contemporary theoretical debates. Voices of Persuasion will be of interest to scholars of American literature of the 1930s, to the interdisciplinary community of critics concerned with questions of ethnographic representation, and to readers concerned with the political dimensions of literature. It demonstrates the multicultural diversity of a period that is too often seen as a rather one-dimensional era of social realist texts, a diversity that many readers today are struggling to understand.’

‘Staub's deft analysis of the politics of voice deepens our theoretical understanding of documentary genres and extends our appreciation of the range of Depression-era literary production. Voices of Persuasion is a sophisticated and valuable contribution to the current revisionary work on the 1930s.’

‘Staub's subtle reading of the representations of the 'people's voice', the voices of the disinherited, offers a rich and revisionist exploration of the documentary prose of the American moderns.’

‘A fresh, eloquent, and stimulating argument that with great originality joins Native American and African-American writing with the 'class' context of thirties documentary. What is original in a still more significant sense, however, is the book's underlying polemic: that recent postmodern challenges to the practice of ethnographic representation - which have become a sort of skeptical, indeed, oversensitive common sense - have caused us to neglect both the political power and the surprising self-consciousness of much early, politically rather than professionally motivated writing about 'disinherited people'. An extremely important argument, and one that helps redeem the efforts of anthropology's pre-professional ancestors from the postmodern critique. It should be an inspiration to reflexive ethnographers.’