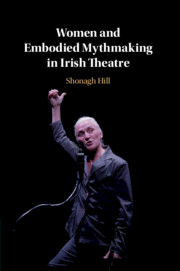 The rich legacy of women's contributions to Irish theatre is traditionally viewed through a male-dominated literary canon and mythmaking, thus arguably silencing their work. In this timely book, Shonagh Hill proposes a feminist genealogy which brings new perspectives to women's mythmaking across the twentieth and twenty-first centuries. The performances considered include the tableaux vivants performed by the Inghinidhe na hÉireann (Daughters of Ireland), plays written by Alice Milligan, Maud Gonne, Lady Augusta Gregory, Eva Gore-Booth, Mary Devenport O'Neill, Mary Elizabeth Burke-Kennedy, Paula Meehan, Edna O'Brien and Marina Carr, as well as plays translated, adapted and performed by Olwen Fouéré. The theatrical work discussed resists the occlusion of women's cultural engagement that results from confinement to idealised myths of femininity. This is realised through embodied mythmaking: a process which exposes how bodies bear the consequences of these myths, while refusing to accept the female body as passive bearer of inscription through the assertion of a creative female corporeality.

‘Women and Embodied Mythmaking in Irish Theatre is an accessible and timely feminist intervention into canonical, patriarchal myth-making on the twenty and twenty-first century Irish stages. Turning her feminist gaze on Irish theatre, Hill persuasively argues that is not enough merely to uncover the histories of missing or marginalised women theatre makers and to reposition these within the canonical, patriarchal set-up. Her innovative, critical manoeuvre is to offer a genealogical framework that disavows a conventional, chronological method; what readers of her study will discover is a retelling of the Irish stage through a non-linear approach that forges links between different sites, modes, or moments of women's resistant theatre-making. This is a narrative in which the leading protagonists are not the patriarchally agreed canonical suspects, but the unruly bodies of those theatre women who contest and rebel against the limiting myths of femininity.'

‘Hill weaves women's re-workings of myth into the story of the Irish nation and … creates a new, malleable mythology of her own. With fascinating … analysis of both canonical and lesser-known women's theatre art, this book creates a genealogy of Irish theatre in which nothing rests ossified in time and place. Hill's case studies return to speak to each other throughout – fulfilling her promise to embody a feminist genealogy and, further, reminding the reader of the exciting potentials for restaging and reimagining these productions. In the aftermath of #WakingtheFeminists and the referendum to repeal the eighth amendment, and amid continued social movements to redress almost a century of institutionalised Irish misogyny, Hill's work moves the conversation about women's contributions to theatre and to nation forward: from decrying absence to insisting on presence, both in our relationship to history and in the contemporary moment.​‘

'Hill's proposed genealogy opens up possibilities for future research that will shed light on how to rethink the development of Irish theater.'

‘In this detailed study, Shonagh Hill traces a lineage of female work and storytelling in Irish theatre, creating a new genealogy and context for plays very often seen through a patriarchal lens. This is a clearly thought-out and well-argued non-linear history of women’s interaction with and interpretation of myths and their own corporeality on stage.’

‘Women and Embodied Mythmaking in Irish Theatre is a timely intervention in a cultural narrative still very much in process. It will be essential reading for teachers, students and researchers working in Irish theatre studies, in Irish studies internationally and on Irish literary modernism.’

‘Shonagh Hill’s magisterial study offers many new aspects in the rather well-researched field of drama and myth. Moreover, with its focus on mythmaking by women, it revises the traditional male-dominated canon of Irish drama and provides an alternative history of theatre and performance (not only) in Ireland. The book develops a complex theoretical framework of genealogical writing, covers abroad range of dramatic texts in the widest sense (including ballet and tableaux vivants) and manages to enrich the textual analyses by means of close readings of the productions of the plays … the book is well-written and … clear …'