Home
Workers and Change in China

Workers and Change in China 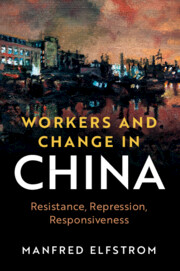 Strikes, protests, and riots by Chinese workers have been rising over the past decade. The state has addressed a number of grievances, yet has also come down increasingly hard on civil society groups pushing for reform. Why are these two seemingly clashing developments occurring simultaneously? Manfred Elfstrom uses extensive fieldwork and statistical analysis to examine both the causes and consequences of protest. The book adopts a holistic approach, encompassing national trends in worker–state relations, local policymaking processes and the dilemmas of individual officials and activists. Instead of taking sides in the old debate over whether non-democracies like China's are on the verge of collapse or have instead found ways of maintaining their power indefinitely, it explores the daily evolution of autocratic rule. While providing a uniquely comprehensive picture of change in China, this important study proposes a new model of bottom-up change within authoritarian systems more generally.

'A complex, compelling picture of protest and its political potential in contemporary China. Widespread worker unrest, Manfred Elfstrom shows, has generated both greater repression and greater responsiveness. State capacity has been strengthened in the short run, but the contradictions inherent in this carrot and stick approach point to long term vulnerabilities that belie confident predictions of regime resilience.'

'Manfred Elfstrom does the improbable. Combining interview, statistical, documentary, and newspaper data, he demonstrates how patterns of protest trigger different patterns of policy response. Not only that: Elfstrom addresses changes in China’s industrial relations, as some parts of the economy fade, others rise to prominence, and contention radicalizes. His book makes signal contributions to both the social sciences and China studies.'

'We know far more about what causes labor protest than what labor protest causes - especially in authoritarian regimes. In Workers and Change in China, Manfred Elfstrom offers a holistic, sociologically rich approach to Chinese worker politics and protest, capturing both the role of popular contention in causing political change and the positive-sum relationship between authoritarian repression and responsiveness.'

'Masterfully-executed, Manfred Elfstrom's study of labor politics in China shows how 'recipes for resistance' and bureaucratic incentives create regional models of collective action and control. Elfstrom brings together protest and policy in innovative ways, as we watch workers' unrest transform the Chinese state's repressive and responsive capacity, and governance is altered from below.'