The Crime of Aggression: The Quest for Justice in an Age of Drones, Cyberattacks, Insurgents, and Autocrats. By Noah Weisbord. Princeton, NJ: Princeton University Press, 2019. Pp ix, 257. Index. 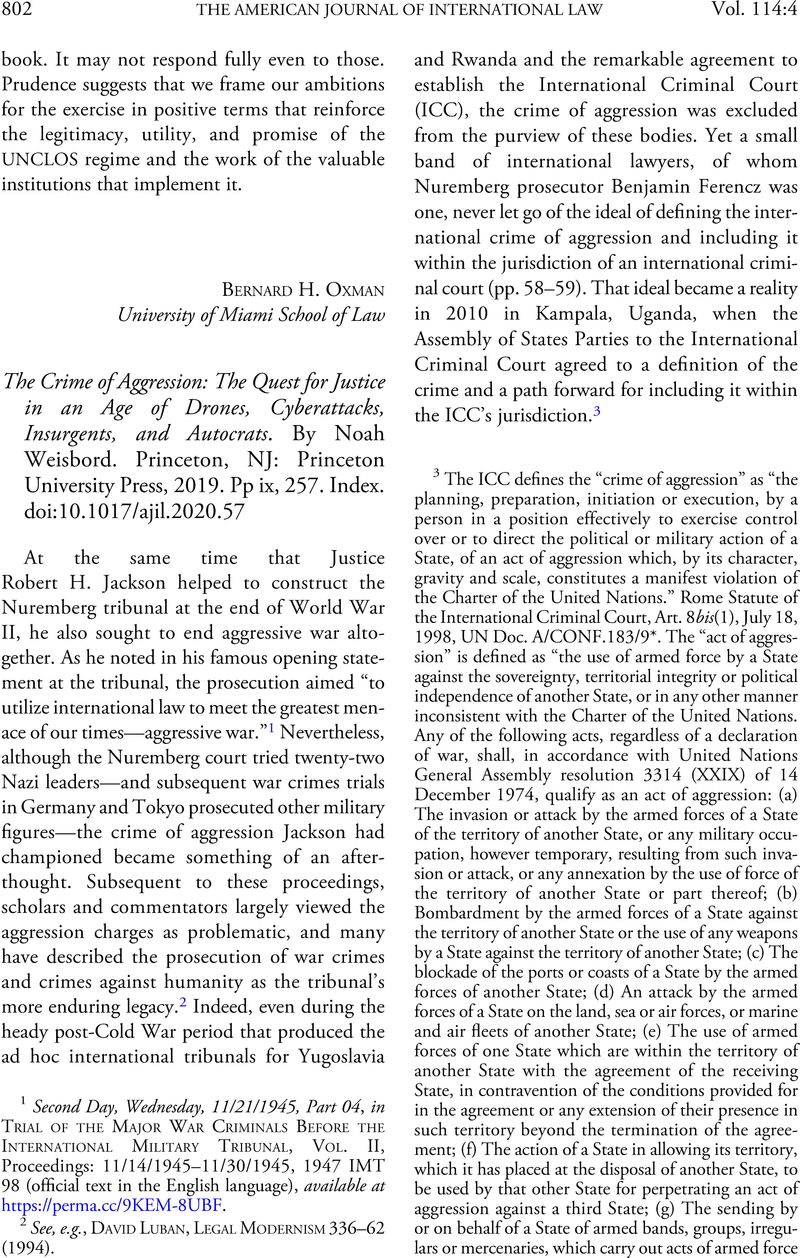 5 For another excellent account of the Kampala negotiations, see Van Schaack, Beth, Negotiating at the Interface of Power and Law: The Crime of Aggression, 49 Colum. J. Transnat'l L. 505 (2011)Google Scholar.

15 See, e.g., Gordon, Robert W., Critical Legal Histories, 36 Stan. L. Rev. 57, 109 (1984)CrossRefGoogle Scholar (“[T]he power exerted by a legal regime consists less in the force that it can bring to bear against violators of its rules than in its capacity to persuade people that the world described in its images and categories is the only attainable world in which a sane person would want to live.”).

17 See generally Laura A. Dickinson, The Dance of Complementarity: Relationships Among Domestic, International, and Transnational Accountability Mechanisms in East Timor and Indonesia, in Accountability For Atrocities: National and International Responses 319, 358–61 (Jane Stromseth ed., 2003) (discussing ways in which international pressure on Indonesia in the period just after East Timor gained its independence strengthened the hand of reformers within the Indonesian government to push for robust domestic accountability mechanisms for atrocities committed during the period leading up to the independence vote).

19 See, e.g., Cover, Robert, The Uses of Jurisdictional Redundancy: Interest, Ideology, and Innovation, 22 Wm. & Mary L. Rev. 639, 682 (1981)Google Scholar (arguing that, although it might seem perverse “to seek out a messy and indeterminate end to conflicts which may be tied neatly together by a single authoritative verdict,” we should “embrace” a system “that permits the tensions and conflicts of the social order” to be played out in the jurisdictional structure of the system); see also Erin Ryan, Federalism as Legal Pluralism, in Oxford Handbook, supra note 8, at 491.

The Crime of Aggression: The Quest for Justice in an Age of Drones, Cyberattacks, Insurgents, and Autocrats. By Noah Weisbord. Princeton, NJ: Princeton University Press, 2019. Pp ix, 257. Index.
×

The Crime of Aggression: The Quest for Justice in an Age of Drones, Cyberattacks, Insurgents, and Autocrats. By Noah Weisbord. Princeton, NJ: Princeton University Press, 2019. Pp ix, 257. Index.
×

The Crime of Aggression: The Quest for Justice in an Age of Drones, Cyberattacks, Insurgents, and Autocrats. By Noah Weisbord. Princeton, NJ: Princeton University Press, 2019. Pp ix, 257. Index.
×
×