Can the ICTY Šainović and Perišić Cases Be Reconciled? 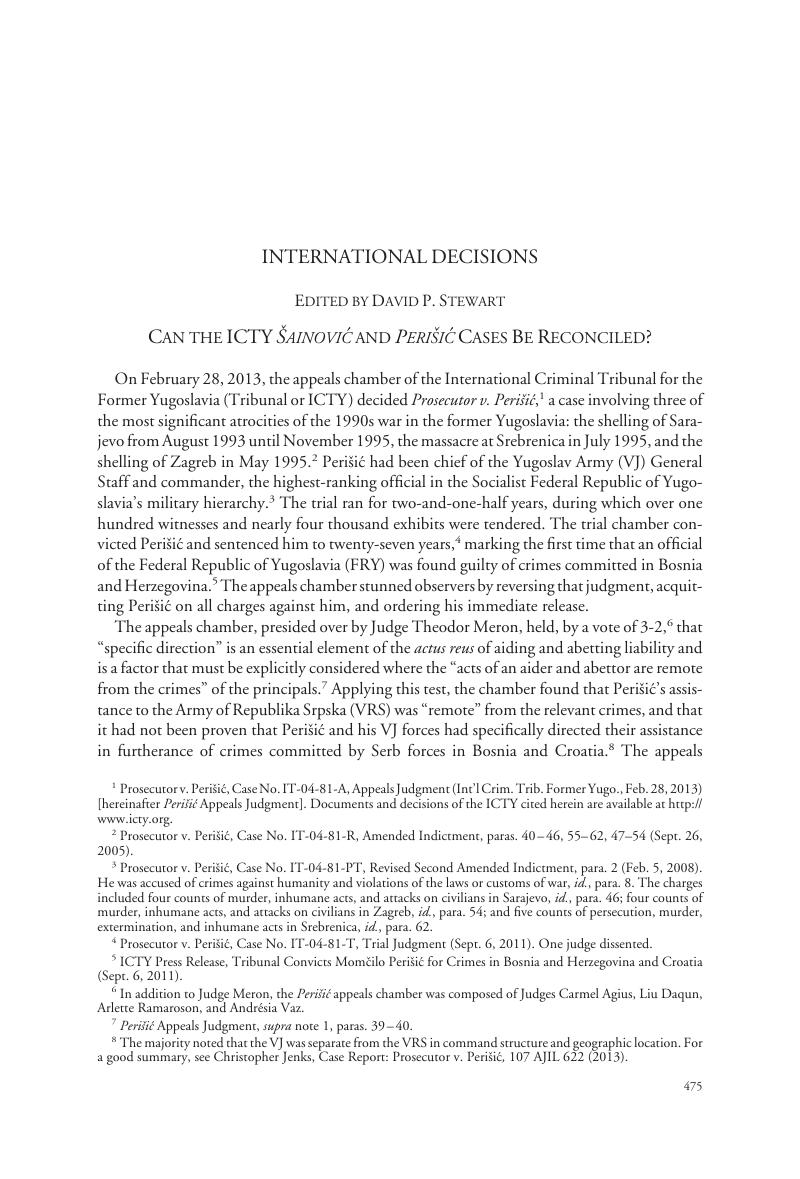 8 The majority noted that the VJ was separate from the VRS in command structure and geographic location. For a good summary, see Jenks, Christopher, Case Report: Prosecutor v. Perišić, 107 AJIL 622 (2013).

11 Id., para. 57. The chamber also reversed Perišić’s conviction as a superior for failing to punish Serb troops operating in Croatia for the shelling of Zagreb early in May 1995. Id., para. 120.

13 The other judges were Mehmet Güney, Fausto Pocar, Arlette Ramaroson, and Bakhtiyar Tuzmukhamedov.

15 See, e.g., ICTY Press Release, Final Report to the Prosecutor by the Committee Established to Review the NATO Bombing Campaign Against the Federal Republic of Yugoslavia, para. 1 (June 13, 2000).

18 Milutinović had been acquitted by the trial chamber and another did not appeal. The fifth accused, Dragoljub Ojdanić, was also convicted on charges of aiding and abetting forcible transfer and deportation, and acquitted, like Lazarević, on the murder charges. He ultimately withdrew his appeal, as did the prosecutor, because he accepted his guilt.

19 The appeals chamber also allowed the prosecution’s appeal on certain points, including the finding that the trial chamber had erred in not considering that several counts of rape constituted acts of persecution as a crime against humanity, noting that the discriminatory intent requirement for persecution could be established by looking at the totality of the circumstances. Šainović Appeals Judgment, paras. 598–99.

21 Of course, in Šainović, since Kosovo was part of the FRY, the various armed groups involved were more clearly linked to the defendants, particularly Šainović, perhaps making it easier for the Tribunal to see him and the others as responsible for crimes committed by the VJ and MUP forces that he did not order. But this circumstance does not explain the difference in legal analysis between the two cases, and it is difficult to read Perišić in any way other than as a direct repudiation of the factual findings in Tadić (and the legal conclusions drawn therefrom).

23 The appeals chamber, Judge Tuzmukhamedov dissenting, affirmed the findings of the trial chamber that Šainović was one of Milošević’s closest and most trusted associates, Šainović Appeals Judgment, para. 848, and the most senior and influential member of the FRY/Serb delegation at Rambouillet, id., para. 854.

34 Id., para. 1604. However, the appeals chamber, Judge Ramaroson dissenting, declined to enter new convictions on appeal in relation to the sexual assaults in question.

35 Under Tadić;, supra note 20, para. 220, JCE I and II are defined as I, “where all participants in the common design possess the same criminal intent to commit a crime (and one or more of them actually perpetrate the crime, with intent),” and II, “where the requisite mens rea comprises knowledge of the nature of the system of ill-treatment and intent to further the common design of ill-treatment.”

38 The chamber found that the failure of Lazarević to take more adequate measures to report, investigate, and initiate disciplinary measures could not constitute “aiding and abetting,” as it had not been proved that the forcible displacement of the Kosovo Albanian population would have been “substantially less likely” had he taken such mea sures, id., para. 1682, and that it had not been proved that his inspection of VJ units in the field provided encouragement and moral support to those forces in carrying out the crime of forcible displacement, id., para. 1690.

39 In support of the judgment, see, for example, Kevin Jon Heller, Why the ICTY’s “Specifically Directed” Requirement Is Justified, Opinio Juris (June 2, 2013, 4:00 AM), at http://opiniojuris.org. For criticism of the judgment, see, for example, James G. Stewart, The ICTY Loses Its Way on Complicity—Part I, Opinio Juris (Apr. 3, 2013, 9:00 AM), at id. ; Marko Milanovic, The Limits of Aiding and Abetting Liability: The ICTY Appeals Chamber Acquits Momcilo Perisic, EJIL: Talk! (Mar. 11, 2013), at http://www.ejiltalk.org.

42 Id., para. 131. The chamber noted that it would not require the “issuing of specific orders by the State, or its direction of each individual operation.” Id., para. 137.

45 I am not convinced this analysis is correct, as Lazarević was often away from the scene of the crimes being committed. Moreover, the troops that committed the offenses, like the troops in Perištć, presumably engaged in both lawful and unlawful activities. Furthermore, even to undertake an analysis of remoteness implicitly accepts the Perišić specific direction requirement, which Judge Liu was unwilling to do.

52 For example, the appeals chamber decisions in many recent ICTR cases have cast doubt upon earlier findings regarding the planning and carrying out of the Rwandan genocide in 1994.

53 Judge Liu suggested that persecution, like genocide, was a specific intent crime; yet the discriminatory mens rea for persecution is lower than the dolus specialis for genocide, and thus the term “specific intent” is perhaps not quite apt.

Can the ICTY Šainović and Perišić Cases Be Reconciled?