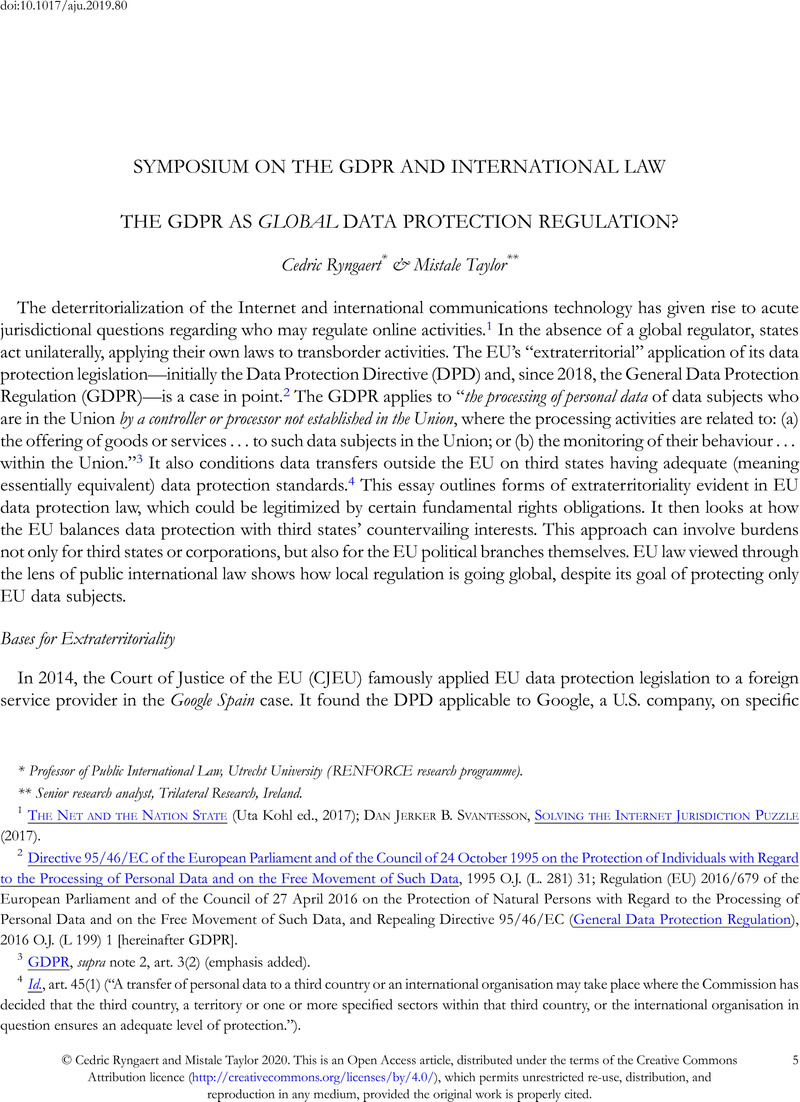 COPYRIGHT: © 2020 Cedric Ryngaert and Mistale Taylor
This is an Open Access article, distributed under the terms of the Creative Commons Attribution licence (http://creativecommons.org/licenses/by/4.0/), which permits unrestricted re-use, distribution, and reproduction in any medium, provided the original work is properly cited.

13 Brussels Court of Appeal, Facebook Ireland Ltd., Facebook Inc. and Facebook Belgium B.V.B.A. v. Belgian Data Protection Authority (DPA) 2018/AR/410, May 8, 2019 (considering the jurisdictional question of whether the Belgian DPA had the competence to initiate enforcement action against Facebook for violating EU data protection law, a case now before the CJEU). Initially, Facebook Belgium and, by extension, the Belgian authorities were found to have the required “inextricable link” to Facebook, but now it is contested that the Irish supervisory authority should initiate such a case because Facebook has its principal EU establishment there).

17 Concerns over casting the net of human rights beneficiaries too wide, and thereby overburdening the state encumbered with extraterritorial obligations, have been central to the debate on the geographical scope of human rights treaties. See Samantha Besson, The Extraterritoriality of the European Convention on Human Rights: Why Human Rights Depend on Jurisdiction and What Jurisdiction Amounts to, 25 Leiden J. Int'l L. 857 (2012).

19 EU companies are barred from complying with U.S. secondary sanctions on the basis of Council Regulation (EC) No 2271/96 of 22 November 1996 Protecting Against the Effects of the Extra-Territorial Application of Legislation Adopted by a Third Country, and Actions Based Thereon or Resulting Therefrom, 1996 O.J. (L 309) 1. However, the Regulation does not provide for EU support in case an EU company faces enforcement action in the United States for non-compliance with U.S. secondary sanctions. See generally Tom Ruys & Cedric Ryngaert, Secondary Sanctions: A Weapon out of Control? International Legality of, and European Responses to, US Secondary Sanctions (Study for the European Central Bank, forthcoming 2019).

20 See, e.g., U.S. Mission to the European Union, Statement from U.S. Secretary of Commerce Penny Pritzker on EU-U.S. Privacy Shield (Feb. 2, 2016) (arguing that giving EU data protection law a broad scope would significantly impede upon individual rights and the free flow of information). See Commission Implementing Decision (EU) 2016/1250 of 12 July 2016 Pursuant to Directive 95/46/EC of the European Parliament and of the Council on the Adequacy of the Protection Provided by the EU-U.S. Privacy Shield, 2016 O.J. (L 207) 1, 48–67.

21 In Schrems II, an Irish judge authorized the U.S. government to file an amicus curiae brief in support of Facebook. The High Court Commercial Ireland, [2016 no. 4809] Data Protection Commissioner v. Facebook Ireland Limited and Maximillian Schrems [2017] para. 19 (“The United States has a significant and bona fide interest in the outcome of these proceedings. At issue in the proceedings is the assessment, as a matter of EU law, of the applicant's law governing the treatment of EU citizens’ data transfer to the US. The imposition of restrictions on the transfer of such data would have potentially considerable adverse effects on EU-US commerce and could affect US companies significantly.”). In Schrems II, Schrems requested that the Irish Data Protection Commissioner halt data transfers between Facebook Ireland and Facebook Inc. on the basis of Standard Contractual Clauses, on the ground that the relevant data may be subject to U.S. mass surveillance in violation of EU data protection law. The CJEU heard arguments July 9, 2019. It is unclear what the U.S. government position is.

22 The Brussels effect is defined as the “unprecedented and deeply underestimated global power that the EU is exercising through its legal institutions and standards,” which “it successfully exports . . . to the rest of the world.” Anu Bradford, The Brussels Effect, 107 Nw. U. L. Rev. 1 (2012).

25 Relatively weak EU bargaining power may result in agreements between the EU and third countries that insufficiently protect EU subjects’ data transferred abroad. See, e.g., Opinion 1–15 on Draft EU-Canada PNR Agreement, ECLI:EU:C:2017:592, para. 232 (Eur. Ct. Justice, July 26, 2017) (ruling that parts of the agreement did not comply with the EU fundamental rights to respect for private life and protection of personal data). It is likely that also the EU-U.S. PNR Agreement violates EU fundamental rights. Such agreements would have to be renegotiated to make them compatible with EU fundamental rights law.