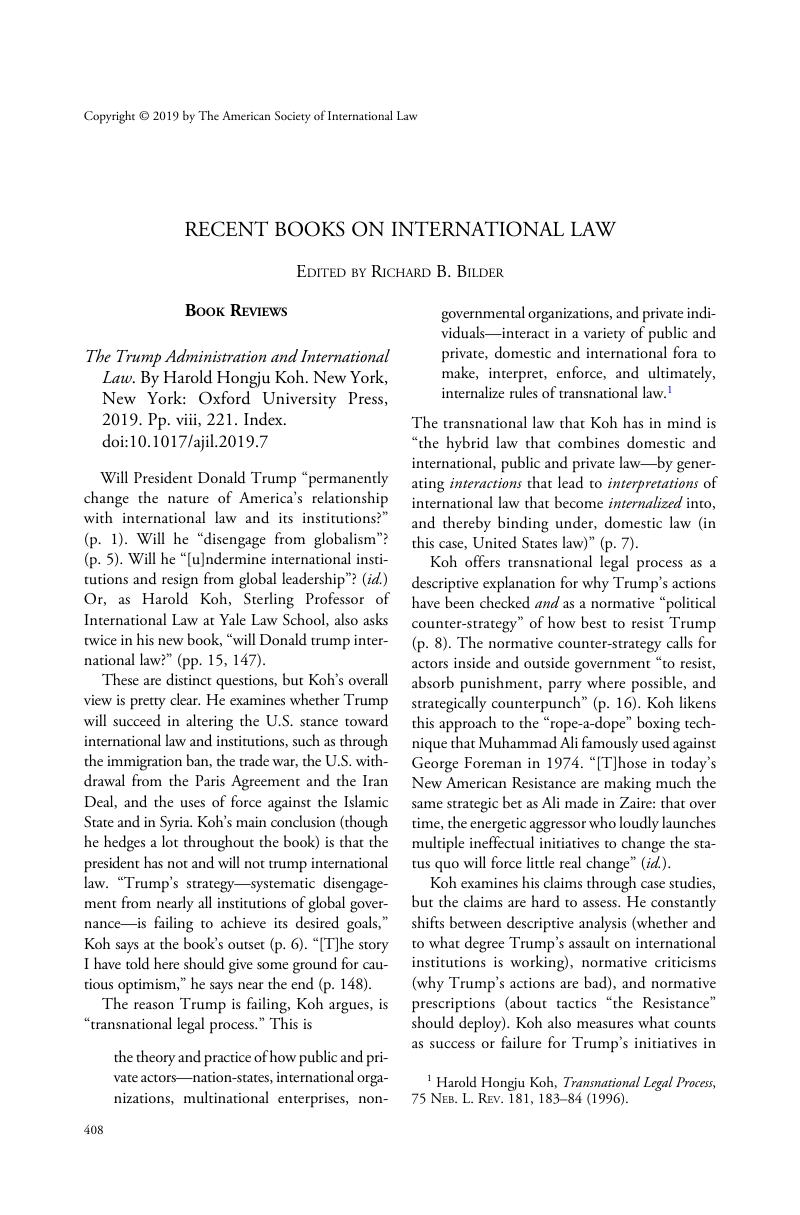 COPYRIGHT: © 2019 by The American Society of International Law

12 See id. Art. 15.2 (“The [compliance] mechanism … shall consist of a committee that shall be expert-based and facilitative in nature and function in a manner that is transparent, non-adversarial and non-punitive.”).

15 Koh asserts that in domestic litigation over the Trump regulatory rollbacks, “environmental groups could well claim that the president has failed faithfully to execute continuing U.S. international legal obligations under the Paris Accords [sic]” (p. 43). I have not been able to discover a court or environmental party that mentioned the Paris Agreement as a legal basis for maintaining the Obama regulations. See, e.g., Clean Air Council v. Pruitt, 862 F.3d 1 (D.C. Cir. 2017) (vacating the Environmental Protection Agency's stay of its final methane rule on Clean Air Act grounds). One reason why is that the domestic and international legal regimes are legally independent of one another. “[T]here would be no violation of international law were a Party to change its domestic measures. If a domestic stakeholder sought to invoke the Paris Agreement in a domestic challenge to withdrawing the Clean Power Plan, courts would almost certainly find that the agreement does not constrain executive branch action.” Legal Issues Related to the Paris Agreement, Ctr. Climate & Energy Solutions (May 2017).

17 U.S. carbon dioxide emissions rose approximately 3.4% in 2018, the largest increase in eight years. See Rhodium Group, Preliminary U.S. Emission Estimates for 2018 (Jan. 8, 2019). Trump's actions are not responsible for all of this increase, but they contributed to it, and they will make the increase harder to reverse, and the Paris targets harder to reach. In order to achieve its Paris Agreement pledge to reduce its greenhouse gas emissions by 26 to 28% compared to 2005 levels by 2025, the United States would have to reduce emissions between 2018–2025 more than twice as fast as it did between 2005–2017. See id. Trump's successor will have a much harder time meeting this target than he or she would have if Hillary Clinton had won in 2016.

20 See Matthew J. Kotchen, Trump Will Stop Paying into the Green Climate Fund. He Has No Idea What It Is, Wash. Post (June 2, 2017). Koh acknowledges this point but optimistically asserts that “domestic and international stakeholders can exert pressure to force this administration and the next to make up the difference” (p. 52).

21 Curtin, supra note 14, at 9 (noting that Turkey, Brazil, and Australia have invoked Trump's actions as a reason for their own anti-Paris steps). According to the most recent authoritative report, seven G20 countries in addition to the United States (Argentina, Australia, Canada, EU28, South Korea, Saudi Arabia, South Africa, and the United States) are not on track to meet their Paris Agreement pledges. See United Nations, Emissions Gap Report 2018, at 9 (2018).

22 Koh paints a number of scenarios in which Trump's impact might be minimal (e.g., pp. 64–67) and notes, for example, that “[a]ll Trump has done is force that process of engage—translate—leverage to shift its focus from Iran, and to take place without him and about him” (p. 69).

25 For a good explanation, see Hathaway, Oona A., Brower, Julia, Liss, Ryan & Thomas, Tina, Consent-Based Humanitarian Intervention: Giving Sovereign Responsibility Back to the Sovereign, 46 Cornell Int'l L.J. 499, 533–35 (2016). Koh has cited only three nations—the United Kingdom, Denmark, and Belgium—that have publicly maintained that humanitarian intervention can be consistent with the Charter. See Koh, supra note 24, at 980. The United States, as Koh notes, has not (pp. 134–35).

28 The points in this paragraph are fleshed out in Goldsmith, Jack & Mercer, Shannon Togawa, International Law and Institutions in the Trump Era, 61 Ger. Y.B. Int'l L. (forthcoming 2019).