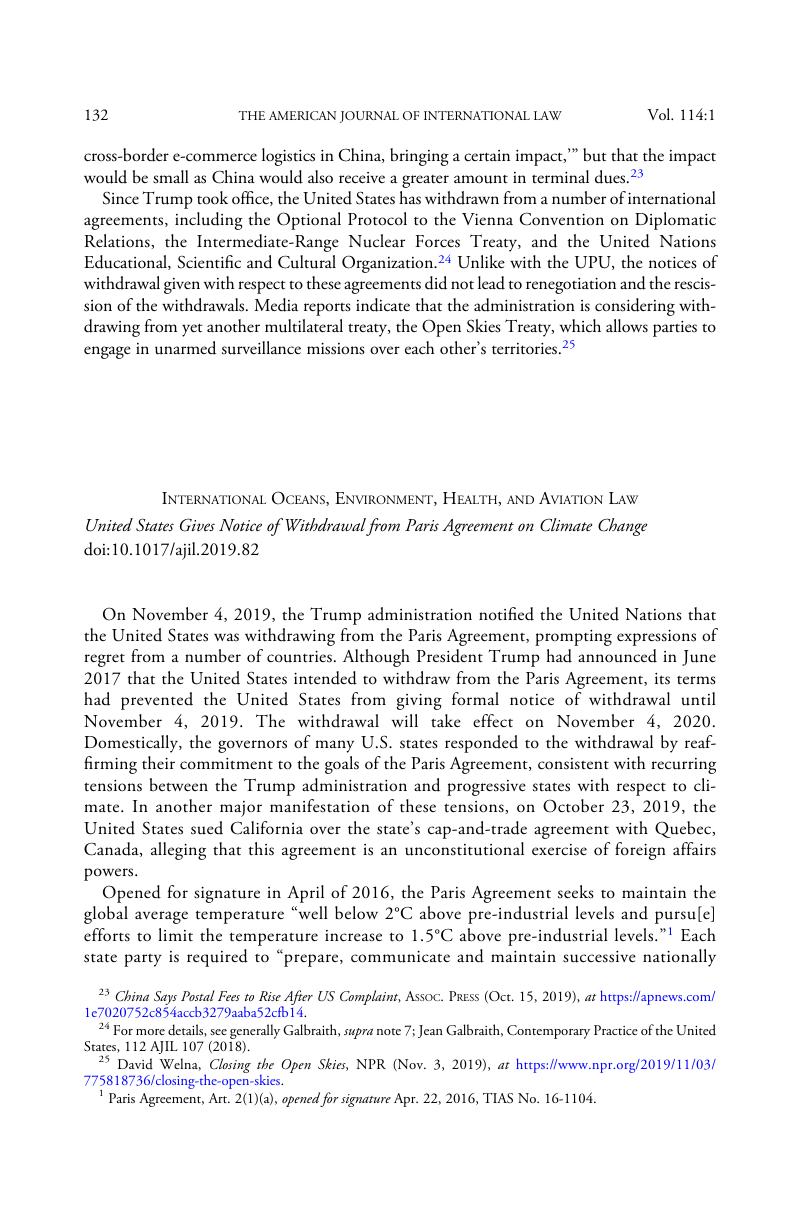 8 See White House Press Release, Press Briefing by Press Secretary Josh Earnest, Deputy NSA for Strategic Communications Ben Rhodes, Senior Advisor Brian Deese and Deputy NSA for International Economics Wally Adeyemo (Aug. 29, 2016), at https://obamawhitehouse.archives.gov/the-press-office/2016/08/29/press-briefing-press-secretary-josh-earnest-deputy-nsa-strategic [http://perma.cc/YD9B-UFX5] (“[T]he Paris agreement is an executive agreement. And so the President will use his authority that has been used in dozens of executive agreements in the past to join and formally deposit our instrument of acceptance and therefore put our country as a party to the Paris agreement.”); U.S. State Dep't Press Release, Senior State Department Official on the Paris Agreement Signing Ceremony (Apr. 20, 2016), at https://2009-2017.state.gov/r/pa/prs/ps/2016/04/256415.htm [http://perma.cc/MK3F-8MKF] (“With respect to the Paris agreement . . . we have a standard State Department exercise that we are currently going through for authorizing an executive agreement . . . .”). In reporting the Agreement to Congress, the Obama administration cited a number of sources of legal authority for concluding it as an executive agreement, including the preexisting United Nations Framework Convention on Climate Change. See Curtis A. Bradley & Jack L. Goldsmith, Presidential Control Over International Law, 131 Harv. L. Rev. 1201, 1250 (2018).

16 See Paris Agreement, supra note 1, Art. 21(3) (providing that nations can continue to join the Paris Agreement after its initial entry into force and that, for such a nation, “this Agreement shall enter into force on the thirtieth day after the date of deposit . . . of [that nation's] instrument of ratification, acceptance, approval, or accession”).

19 See, e.g., EU Hopes US Will Rethink Choice to Pull out of Climate Pact, AP News (Nov. 5, 2019), at https://apnews.com/f81a25b839324e578641946c358c22ec (quoting German Environment Minister Svenja Schulze as calling the U.S. withdrawal “regrettable” and noting that “[t]he rest of the world stands together on climate protection”); Rossella Tercatin, Israel Reaffirms Its Commitment to Paris Agreement, Jerusalem Post (Nov. 6, 2019), at https://www.jpost.com/Israel-News/Israel-reaffirms-its-commitment-to-Paris-Agreement-607032 (quoting Israeli Environmental Protection Minister Zeev Elkin as saying, “The decision made by the United States to withdraw from the Paris Agreement will not lead us to withdraw from it as well”).

33 See Stipulation and [Proposed] Order Extending Time for Defendants to Respond to Complaint or Amended Complaint, United States v. California, No. 19-2142 (E.D. Cal. Nov. 19, 2019) (requesting, with the joint agreement of the parties, that California have until January 6, 2020, to file an answer or a motion to dismiss).