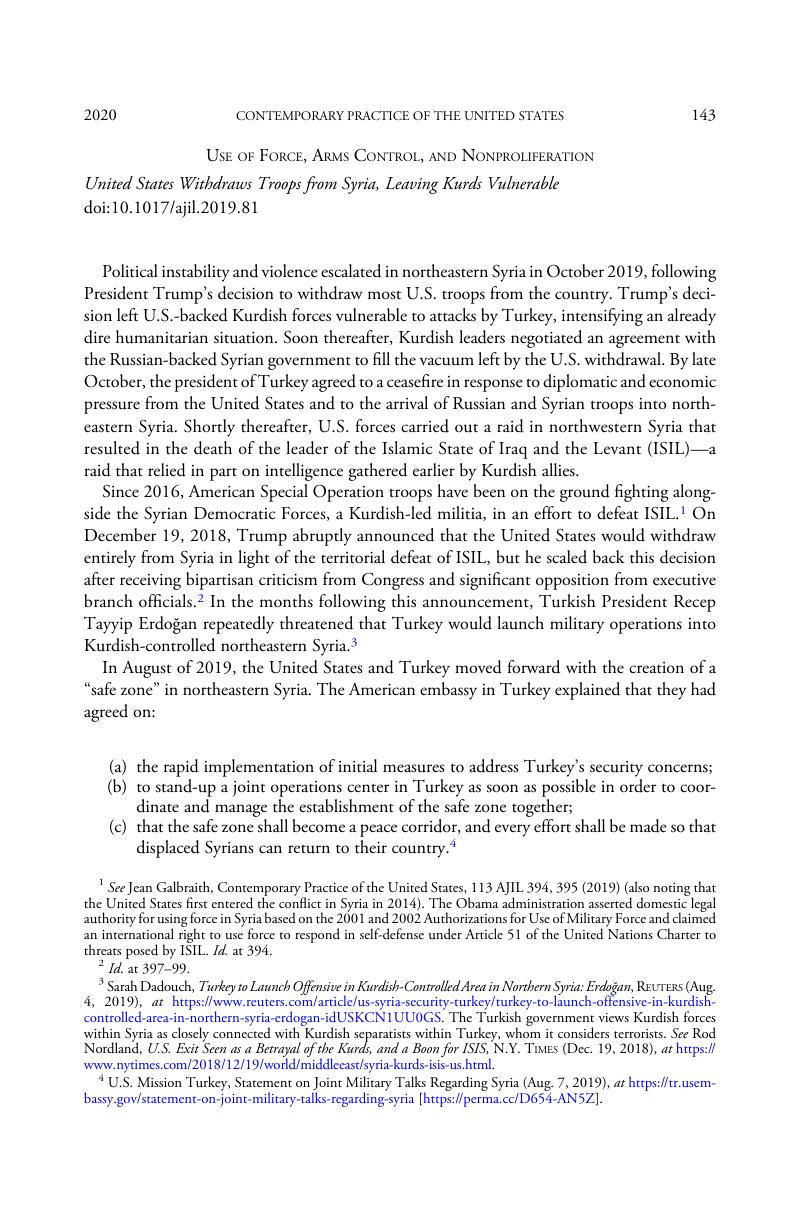 1 See Jean Galbraith, Contemporary Practice of the United States, 113 AJIL 394, 395 (2019) (also noting that the United States first entered the conflict in Syria in 2014). The Obama administration asserted domestic legal authority for using force in Syria based on the 2001 and 2002 Authorizations for Use of Military Force and claimed an international right to use force to respond in self-defense under Article 51 of the United Nations Charter to threats posed by ISIL. Id. at 394.

3 Sarah Dadouch, Turkey to Launch Offensive in Kurdish-Controlled Area in Northern Syria: Erdoğan, Reuters (Aug. 4, 2019), at https://www.reuters.com/article/us-syria-security-turkey/turkey-to-launch-offensive-in-kurdish-controlled-area-in-northern-syria-erdogan-idUSKCN1UU0GS. The Turkish government views Kurdish forces within Syria as closely connected with Kurdish separatists within Turkey, whom it considers terrorists. See Rod Nordland, U.S. Exit Seen as a Betrayal of the Kurds, and a Boon for ISIS, N.Y. Times (Dec. 19, 2018), at https://www.nytimes.com/2018/12/19/world/middleeast/syria-kurds-isis-us.html.

11 Liz Sly, Sarah Dadouch & Asser Khattab, Syrian Kurds See American Betrayal and Warn Fight Against ISIS Is Now in Doubt, Wash. Post (Oct. 7, 2019), at https://www.washingtonpost.com/world/middle_east/syrian-kurds-see-american-betrayal-and-warn-alliance-against-isis-is-now-in-doubt/2019/10/07/96c425da-e902-11e9-a329-7378fbfa1b63_story.html (also quoting a statement from Syrian Kurdish leaders that “[t]o disregard our partnership would also send a clear signal to all would-be partner forces of the United States that a U.S. alliance may not be trustworthy”).

13 Letter Dated 9 October 2019 from the Permanent Representative of Turkey to the United Nations Addressed to the President of the Security Council, UN Doc. S/2019/804, at https://undocs.org/S/2019/804. The European Parliament passed a resolution describing Turkey's actions as “a grave violation of international law” that “is undermining the stability and security of the region as a whole, bringing further suffering to people already affected by war, causing the mass displacement of civilians, and could contribute to the re-emergence of [ISIL].” Resolution on the Turkish Military Operation in Northeast Syria and Its Consequences, Eur. Parl. Doc. 2886(RSP) (2019), at http://www.europarl.europa.eu/doceo/document/RC-9-2019-0123_EN.html.

14 Read Trump's Letter to President Erdoğan of Turkey, N.Y. Times (Oct. 16, 2019), at https://www.nytimes.com/interactive/2019/10/16/us/politics/trump-letter-turkey.html. That same day, Trump stated that the United States was relocating “some of the most dangerous [detained ISIL] fighters” out of the area. Donald J. Trump, Remarks by President Trump at Signing of Executive Orders on Transparency in Federal Guidance and Enforcement, 2019 Daily Comp. Pres. Doc. No. 705, at 7 (Oct. 9).

30 White House Press Release, Statement from the President on the Death of Abu Bakr al-Baghdadi (Oct. 27, 2019), at https://www.whitehouse.gov/briefings-statements/statement-president-death-abu-bakr-al-baghdadi [https://perma.cc/YD4E-CWFC].

39 See Dominic Evans, Turkey's Plan to Settle Refugees in Northeast Syria Alarms Allies, Reuters (Oct. 8, 2019), at https://www.reuters.com/article/us-syria-security-turkey-refugees-graphi/turkeys-plan-to-settle-refugees-in-northeast-syria-alarms-allies-idUSKBN1WN28J (noting widespread skepticism regarding this plan); see also Lama Fakih, Turkey's “Safe Zone” Would Be Anything But, Hum. Rts. Watch (Oct. 11, 2019), at https://www.hrw.org/news/2019/10/11/turkeys-safe-zone-would-be-anything (stating that “Turkey's plan to create a 32-kilometer ‘safe zone’ in Syria where it could relocate one million Syrian refugees is woefully misguided and dangerous—and bound to fail”).