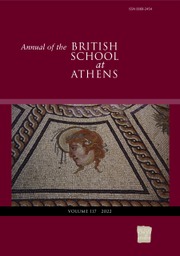 Annual of the British School at Athens

In a rescue excavation at Knossos in 1977, a building dating to the last years of the hellenistic period was discovered. In it were an area with a stone tub and lid, the use of which was unknown, a well, and a wine press. The wine press had a treading-floor with remains of flooring composed of flagstones and plaster, which sloped towards a hole in a low barrier wall. The hole gave onto a stone spout, set above a tank coated in waterproof plaster. Adjacent was part of a store building, which was probably used as a cellar: it contained one pithos and there were indications that there had been others. Two tests below the building uncovered the violent destruction of a house of earlier hellenistic date, a stratum with sherds of the end of the 8th cent.–beginning of the 7th cent. BC, and scanty remains of the Minoan period.

1 The material from this excavation (code KWW) is in the Stratigraphical Museum, Knossos. D. Vavouranakis, the Archaeological Service's Knossos guard, noticed and reported the subsidence. The writer excavated the site, while Knossos Fellow, at the request of the Herakleion Ephoreia represented by the epimelete (later ephor) Miss A. Lembesi, who took a friendly interest in its progress. The land belonged to Mrs Maria Kalathaki, whose assent to repeated requests to extend the excavation is remembered with gratitude. The excavation was backfilled. The date for the LG/EA level was a verbal communication from J. N. Coldstream at the time of the excavation; the dating of the hellenistic levels and the identification of the Hadra ware derive from verbal information from P. J. Callaghan, also during the excavation. The pottery and finds were assigned to Dr Callaghan for publication by the then director of the British School, Dr H. W. Catling, and will appear in a separate article. Philip Kinns studied the coins, and Sheilagh Wall kindly provided the attached report on the animal bones in 1980. Photographs and plans are by the writer, but Fig. 1 is based on David Smyth's work in the Knossos Survey (2nd edn) and in AR 1977–79, fig. 105, while Fig. 4 incorporates sections drawn by Guy and Jan Sanders, whose help was much appreciated.

3 For comment on such doors in buildings connected with vineyards in both ancient and modern Rheneia, see Kent, J. H., ‘The temple estates of Delos, Rheneia and Mykonos’, Hesp. 17 (1948), 293 n. 181.CrossRefGoogle Scholar

4 A sample of the earth inside the tub was kept.

5 Samples of the grey silt from the tank ledge and within the tank were kept for analysis, but this has not so far proved possible.

38 Blitzer, H., ‘Olive cultivation and oil production in Minoan Crete’, in Amouretti, M.-C. and Brun, J.-R. (eds), La Production du vin et de l'huile en Méditeranée de l'âge du bronze à la fin du XVIème siècle (BCH suppl. 26; Paris, 1993), 166–7, figs. 2–3.Google Scholar I would like to thank the author for an advance copy of this article. The rest of the volume was not available to me.

42 At first pure oil runs from the pulp in the sacks, but to remove all the oil they have to be drenched with hot water. The oil and water separate in the collection receptacle, and the oil can then be skimmed off. This is tedious, however, and it is better if the receptacle has a low-set spout or bunghole, through which the water can be allowed to drain away: then, when the oil starts to flow, it can be caught in a different container. Our stone tub was considered for this use too, but again the blocked hole negated the idea.

45 Where pithoi were used as collection tanks, it was probably possible to put a strainer directly over the vessel's mouth.