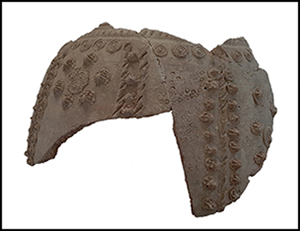 Archaeological remains at a religious site dedicated to a Yasawiyya Sufi saint reveal a possible centre of iron production along the trade routes connecting the medieval urban centres of Central Asia.

This is an Open Access article, distributed under the terms of the Creative Commons Attribution licence (http://creativecommons.org/licenses/by/4.0/), which permits unrestricted re-use, distribution, and reproduction in any medium, provided the original work is properly cited.
Copyright
Copyright © The Author(s), 2021. Published by Cambridge University Press on behalf of Antiquity Publications Ltd

Abu Muslim qala (42°9′33.728″ north, 60°15′0.453″ east) is an archaeological site adjacent to the Shayx Jalil mausoleum in Karakalpakstan, Uzbekistan. In 2018–2019 researchers conducted preliminary survey and sampling of surface remains. Results suggest Abu Muslim qala was an iron-production site as early as the seventh century AD, with habitation spanning five centuries or more. Abu Muslim qala is strategically located with access to critical raw material sources along trade routes that connected the major urban centres of Khorezm. It may have been important to the metals trade between Central Asia and Europe in the Middle Ages.

Medieval Arabo-Persian geographers describe an active trade between Central Asia and the Volga-Urals, along which valuable commodities moved between the Islamic world and Northern Europe (e.g. Noonan Reference Noonan and Bálint2000). Metals from Central Asia were important trade items, including crucible steel (Feuerbach Reference Feuerbach2006). By late antiquity the region of Khorezm was unquestionably important in this trade. Khorezmian silver artefacts from the Volga-Urals suggest relations by the seventh century AD, with the Khorezmian cities of Kath and Gurganj cited as major trade depots by the tenth century (e.g. Azarpay Reference Azarpay1969; Collins Reference Collins2001: 254–55 & 264).

The origins of metal goods from Khorezm are obscure, as the region is not known to be mineral-rich. Many raw materials may have come from outside; texts from the eighteenth century, for example, document bloomery iron imported from Russia. Pre-modern iron production in Khorezm is mostly small scale, and although it has been suggested that some ore might have come from the local Sultanuizdag Mountains, where ancient mines exist (for turquoise and talc), iron ore deposits were never identified by archaeologists (e.g. Sverchkov Reference Sverchkov2009).

Abu Muslim qala lies at the foot of the westernmost promontory of the Sultanuizdag, with the remains of a settlement (0.5ha, with modern disturbance) and a slag mound (0.35ha) (Figure 1). Another promontory 25km east, Tebinbulak, has recently been identified as the largest iron ore deposit in Uzbekistan (Dmitriev et al. Reference Dmitriev, Mukhitdinov, Rakhimov and Sitdikov2005). Freshwater sources nearby include the Amu Darya (2km away), a natural spring next to the slag mound, and Khojakol Lake (6km away). Sources on the Shayx Jalil mausoleum suggest the site has a deep antiquity, but there have been no investigations (Gulyamov Reference Gulyamov1957).

Abu Muslim qala sits along a millennia-old route. Eighteen kilometres away, the dakhma of Chilpik (first to tenth centuries AD) was a regionally important funerary site that drew pilgrimage from across the oasis. In the fourth to thirteenth centuries AD, Abu Muslim qala sat between Kath and Gurganj, on a path demarcated by signal towers (Figure 2). The Firdaws al-Iqbal (Bregel Reference Bregel1999) describes royal hunts and legends of valuable metals that drew colonial authorities to this area; Vembery (Reference Vembery1868) noted how river travellers moved through the narrow Qisnaq pass, 6km south of Abu Muslim qala.

Abu Muslim qala was mapped using a Garmin GPSMAP 64st. Five samples of varied material were selected from the slag mound surface for pXRF analysis (SL1–5). Modern disturbance of the settlement includes refuse pits, which have turned up quantities of ceramics. The west section of one recently opened pit was examined (2 × 1.20m, 0.70m deep), which had a distinct layer of slag and burnt soil (20mm thick, 0.64m below the modern ground surface) (Figure 3). A charcoal sample from this cultural layer (30mm; CS1) provided a single carbon date (Beta-566968, 1280±30BP; 661–774 cal AD at 95.4%, BetaCal v.3.21 using IntCal13; Bronk Ramsey Reference Bronk Ramsey2009; Reimer et al. Reference Reimer2013). This is possibly early in the site occupation sequence, which, based on surface ceramics, ranges from the sixth to thirteenth centuries AD (Figure 4).

Six samples (SL1-SL5, CS1) were analysed using a portable Bruker Tracer III-SD handheld XRF spectrometer in desktop configuration with a rhodium target X-ray tube and silicon drift detector. Readings were taken at 40keV and 10mA for 100 seconds with no filter. All samples were remarkably heterogeneous. Samples were analysed only once to assess the pyro-technological activities at Abu Muslim qala. Metal-bearing ores are smelted to separate metal from non-metallic components (gangue). The high temperatures turn the gangue, and any fluxing materials into a glassy heterogeneous mass (slag) composed of silicates and oxides. While the goal of the smelt is to remove the metal, the efficiency of smelting technology in the past frequently resulted in slags containing the target metal.

pXRF results show variable composition between samples. This is expected due to slag's heterogeneity and the potential for individual samples to have been created by different smelts using ores of varying purity over centuries. While the peaks for calcium (Ca), potassium (K) and manganese (Mn) are variable, all sample spectra are, however, dominated by very large iron (Fe) and cobalt (Co) peaks (Figure 5). The cobalt peak is likely a result of overlap with the iron energy signal. Spectral interference is common in pXRF analysis and the proximity of the Fe Kβ-line to the Co Kα-line makes the quantification of cobalt difficult (Gallhofer & Lottermoser Reference Gallhofer and Lottermoser2018). Much of the cobalt peak is probably a result of the large amount of iron being detected. No attempt was made to quantify the pXRF results due to a lack of appropriate calibration, but the results confirm the smelting of iron ores at Abu Muslim qala in the past. Additionally, a small titanium (Ti) peak is observed (see Figure 5), which is not enough to confirm the provenance of the iron ores smelted at Abu Muslim qala, but is in keeping with a titanium-rich source such as Tebinbulak (Dmitriev et al. Reference Dmitriev, Mukhitdinov, Rakhimov and Sitdikov2005).

The sample data confirm iron smelting, and Abu Muslim qala's prominent, well-provisioned location, including its proximity to a recently identified major iron ore deposit, is suggestive but not conclusive. Ancient mines at Tebinbulak (Figure 6) and birch bark at nearby Djanpik-kala (ninth to fourteenth centuries AD) indicate medieval local extraction and northern trade. Of interest for future research is the specific composition of the Tebinbulak ores, which contain titanium and vanadium to produce naturally alloyed steel (Verhoeven et al. Reference Verhoeven, Pendray and Dauksch1998). Based on this array of evidence, Abu Muslim qala and the Tebinbulak deposit may have been important in the medieval metals trade between Central Asia and the Volga-Urals, and possibly beyond.

This article is dedicated to the memory of G. Khozhaniyazov. We wish to thank A. Yu. Adilov, Deputy Head of the Directorate for the Construction of Mining and Metallurgical Complex at Tebinbulak, for information that supported this work.

This research was conducted as part of the Khorezm Ancient Agriculture Project, with support from National Geographic (NGS-179E-18) and the American Philosophical Society.