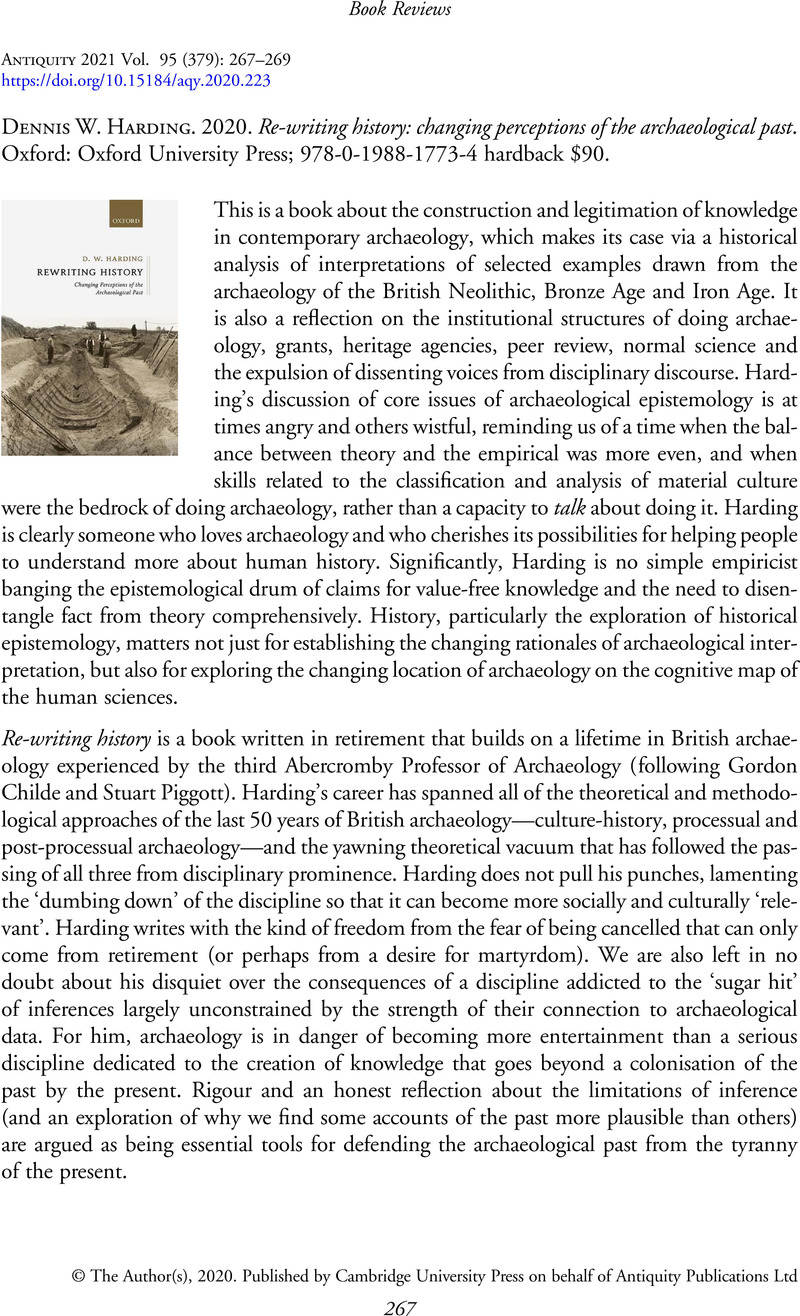 An abstract is not available for this content so a preview has been provided. To view the full text please use the links above to select your preferred format.
Type
Book Reviews
Information
Antiquity , Volume 95 , Issue 379 , February 2021 , pp. 267 - 269
DOI: https://doi.org/10.15184/aqy.2020.223[Opens in a new window]
Copyright
Copyright © The Author(s), 2020. Published by Cambridge University Press on behalf of Antiquity Publications Ltd 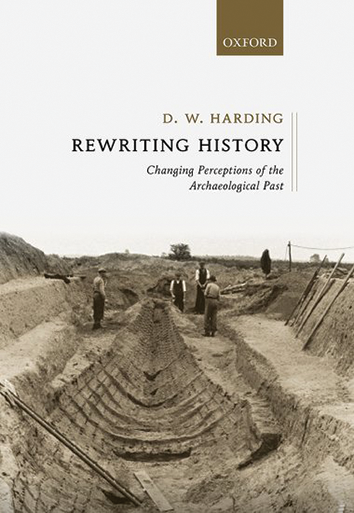 This is a book about the construction and legitimation of knowledge in contemporary archaeology, which makes its case via a historical analysis of interpretations of selected examples drawn from the archaeology of the British Neolithic, Bronze Age and Iron Age. It is also a reflection on the institutional structures of doing archaeology, grants, heritage agencies, peer review, normal science and the expulsion of dissenting voices from disciplinary discourse. Harding's discussion of core issues of archaeological epistemology is at times angry and others wistful, reminding us of a time when the balance between theory and the empirical was more even, and when skills related to the classification and analysis of material culture were the bedrock of doing archaeology, rather than a capacity to talk about doing it. Harding is clearly someone who loves archaeology and who cherishes its possibilities for helping people to understand more about human history. Significantly, Harding is no simple empiricist banging the epistemological drum of claims for value-free knowledge and the need to disentangle fact from theory comprehensively. History, particularly the exploration of historical epistemology, matters not just for establishing the changing rationales of archaeological interpretation, but also for exploring the changing location of archaeology on the cognitive map of the human sciences.

Re-writing history is a book written in retirement that builds on a lifetime in British archaeology experienced by the third Abercromby Professor of Archaeology (following Gordon Childe and Stuart Piggott). Harding's career has spanned all of the theoretical and methodological approaches of the last 50 years of British archaeology—culture-history, processual and post-processual archaeology—and the yawning theoretical vacuum that has followed the passing of all three from disciplinary prominence. Harding does not pull his punches, lamenting the ‘dumbing down’ of the discipline so that it can become more socially and culturally ‘relevant’. Harding writes with the kind of freedom from the fear of being cancelled that can only come from retirement (or perhaps from a desire for martyrdom). We are also left in no doubt about his disquiet over the consequences of a discipline addicted to the ‘sugar hit’ of inferences largely unconstrained by the strength of their connection to archaeological data. For him, archaeology is in danger of becoming more entertainment than a serious discipline dedicated to the creation of knowledge that goes beyond a colonisation of the past by the present. Rigour and an honest reflection about the limitations of inference (and an exploration of why we find some accounts of the past more plausible than others) are argued as being essential tools for defending the archaeological past from the tyranny of the present.

It is worth stressing that Harding does not argue against the theory-dependence of observation or posit the development of an archaeology that must only discuss matters that can be directly observed. Rather, he is concerned with considering the consequences of a discipline where interpretation is, to all intents and purposes, largely unconstrained by the empirical. This is a recurring theme in the book, whether it is a reflection on Wheeler's dictum that archaeologists should be concerned with people rather than just with things, or whether we need to devote more attention to the importance of grounding empathetic understanding or emotional connections between present and past, or indeed whether the discipline should jettison analytical rigour for our capacity to engage with contemporary understandings about what is relevant or meaningful for us to know about people. It is also worth noting that Harding understands that the sheer scale of archaeological data has massively expanded over the past 50 years, posing real challenges to practitioners seeking to generalise securely beyond an intimate understanding of particular dates, DNA profiles, site types or artefact taxa. Again, this massive accumulation of data (if it is created in an environment where frameworks of interpretation change without theories being discarded for reasons other than a decline in their ‘relevance’) might well be understood as being a significant inhibitor to our capacity to accumulate knowledge. In other words, while there has been an explosion in the amount of empirical information, there has been no concomitant expansion in our control over the theoretical instruments that we use to make sense of it.

These are important, if unfashionable, issues that practitioners need to engage with, and debate, rather than simply pass over. Harding is well aware that his take on archaeological epistemology (or indeed his recounting of changing perceptions in his case studies) is hardly mainstream, but his intent is clear enough. Lurking beneath the surface of his account, however, lie some difficult (and debatable) ideas. Where he sees change in interpretation (based on changing fashions in the human sciences), we might instead see continuity. For example, Harding is convinced that the project of culture-history is dead and buried. In my view, the evidence indicates the opposite. While archaeologists might talk about the rationale of its replacement by processual or post-processual archaeologies, close examination indicates that its assumptions are still alive in the project of social archaeology.

This leads us to a consideration of sine-factuals, the importance of which Harding sketches but does not explore in any detail. It is hardly news to remark that the bedrock assumptions core to humanities such as history and archaeology change very slowly (a point made with some vigour by Foucault, especially in Les mots et les choses (Reference Foucault1966)). This account is supported by discussions about Bayesian reasoning, especially the importance of prior probabilities (really the importance of histories of interpretation in archaeology), in determining which arguments we find plausible and which we do not. Explorations of historical epistemology of the kind sketched by Harding can be very useful for identifying prior probabilities in archaeological reasoning, and for helping us to shape responses to them. Thus, ‘facts’ might be regarded as being less persuasive than tradition, hence creating an inertia that we can only overcome when profound change occurs in the metatheoretical universe.

Re-writing history is an interesting and provocative book that challenges the current consensus, and is all the more valuable for it.