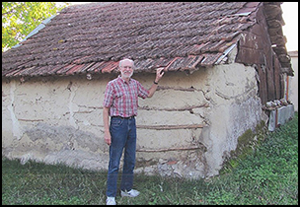 In 2015 an ethnoarchaeological survey of standing earthen buildings took place near the city of Celano in central Italy's Abruzzo region. The study provided observations relevant to archaeologists interpreting earthen architectural remains in many areas of the world: insights on structural function and the longevity of such buildings.

The purpose of this investigation near Celano, Italy, was to provide comparative data for sustained research on Neolithic wattle-and-daub buildings in Calabria and the long-term continuation of this architectural tradition in both southern and central Italy (Shaffer Reference Shaffer, Tykot, Morter and Robb1999, Reference Shaffer2016). The 2015 study has broad relevance, as archaeological examples of earthen architecture are found in much of Europe and other world regions (e.g. Van Beek Reference Van Beek2008). Fieldwork began with the recording of standing structures. Interviews with local inhabitants served to interpret building practices and provide social contexts for construction and use. This brief overview highlights ethnoarchaeological findings on functions and lifespans of the structures.

Celano is located 90km east-north-east of Rome along the northern margin of the Fucino Basin. This plain, with no natural outlet due to surrounding mountains, formerly held Italy's third largest lake with an area of around 155km2: Lago Fucino. Several failed attempts to drain the lake and prevent periodic flooding of adjacent lands began in Classical times. In the nineteenth century Alessandro Torlonia organised a project that successfully provided a new drainage canal and reclaimed the floor of the lake as fertile farmland (Burri Reference Burri2011; Figure 1).

Figure 1. View of the study area in the Fucino Basin (photograph by G. Shaffer).

Archaeological investigations of earthen buildings in greater Abruzzo include studies of examples dating back to the Neolithic (Tozzi & Zamagni Reference Tozzi and Zamagni2003: 85). Archival and field research has documented a minor complement of earthen structures around the Fucino Basin from more recent times, after its draining. In 1882 Torlonia had commissioned the provision of earthen-walled houses for farmers, so they would have more convenient lodging by their leased fields on the drained lake bed (Dagradi Reference Dagradi and Ortolani1961: 95; Ortolani Reference Ortolani1961: 63; Istituto Luce & Archivio Sforza n.d.).

Dagradi (Reference Dagradi and Ortolani1961: 93–94) surveyed rural buildings around the Fucino Basin in the 1950s. The earthen buildings had wooden frames and a form of wattle and daub. The daub was comprised of moistened soil from the Fucino Basin, shredded straw and clay. Earthen walls were about 0.30m-thick, but thicker in barns (G. Sforza pers. comm.). These structures are comparable with the more prevalent, nineteenth- and twentieth-century earthen houses in eastern Abruzzo called massoni built from lumps of clayey soil and chopped straw (Baldacci Reference Baldacci1958: 25–26).

The identification of earthen buildings around Celano included a ‘windshield’ survey from an automobile. This investigation explored approximately 13km along the northern part of Via Circonfucense, a beltway around the Fucino Basin, as well as lands to the immediate south by Via San Nicola. Discussions with local inhabitants and investigations of possible earthen buildings on foot supplemented the work.

The survey along Via Circonfucense identified two, one-storey earthen buildings (Figures 2–4). They include a former house (capanna) and an adjacent small barn (stalla). Selected architectural data (including those on Calabrian buildings examined between 1979–1996) are found in Table 1. Detailed discussions of these and other structures identified are recorded in Shaffer (Reference Shaffer2017).

Figure 2. Detail of the earthen wall of Via Circonfucense's capanna, showing the distinctive straw temper (photograph by G. Shaffer).

Figure 3. a) North-east corner of the capanna; b) plan of the capanna (drawing by R. Hall; wall thickness estimated due to inaccessibility).

Figure 4. a) South elevation of Via Circonfucense's stalla with beams for harnesses left of window; b) plan of the stalla (drawing by R. Hall; stalla approximately 3m east of capanna).

An informant related that a family had lived in the earthen house, perhaps from the 1950s till the 1970s. While now unoccupied, it may serve as storage for an adjacent modern house. Within the capanna, a kitchen was located on the ground floor, and sleeping quarters were in a loft. Locally, the building style is called paglia e fango: straw and mud. Relatively widely spaced horizontal wattles are present on an outer wall. It was not possible to enter the capanna.

The family kept animals in the stalla. Its wall faces do not reveal wattles, but one horizontal wattle is visible inside the daub of the partially collapsed eastern wall. Massoni-builder Giovanni Maccheroni (pers. comm.) related that he would reinforce walls of structures by setting wooden poles, 1–1.50m long, inside their corners. Wall thickness ranges from 0.32–0.40m. The south wall includes two short protruding wooden beams that would have served for hanging up harnesses, ropes and saddles of horses and other draught animals (Figure 4; G. Sforza pers. comm.).

Two additional earthen buildings (one-storey capanne) were found along Via San Nicola (Figures 5–6). Unfortunately, observations were limited due to restricted access. The structures apparently have been used recently for storing farming supplies and for limited sheltering of workers from adjacent fields. The late owner's heirs related that the structures were built between 1890 and 1912 as dwellings (G. Sforza pers. comm.). They filled such roles till 1950–1960.

Documentation of these structures was important, as they are no longer being made in the study area. This recording is critical to preserve part of Abruzzo's cultural patrimony. Compared to several wattle-and-daub buildings earlier recorded in Calabria by the present author (Table 1) and by others (Baldacci Reference Baldacci1949; Cavalcanti & Chimirri Reference Cavalcanti and Chimirri1999), the capanna and stalla identified along Celano's Via Circonfucense evidence fewer, more widely spaced wattles and thicker walls. They appear to represent buildings on a continuum between wattle and daub proper and massoni. One might characterise them as a variant of layered mud construction (see Van Beek Reference Van Beek2008) within a timber frame.

The final observations are more ethnoarchaeological in nature and might assist archaeological interpretation of earthen building remains. Recording of the earthen buildings with different uses underscores that one should not label all archaeological structures as houses. Some could have served as shelters for animals and other belongings or for activities besides human habitation. Attribution of structural purpose is critical, for example, when estimating a settlement's population size and characterising its functions. Archaeological attribution of function might benefit from compiling data to distinguish between houses, barns and other structures. For instance, barns with animals may leave behind remains of walls that are thicker and evidence imprints or damage from the hanging of tack and other equipment. Also, habitations may contain features representing hearths (observed in Calabria with sooted daub walls by a former fireplace).

Lastly, maintenance of the majority of the Celano buildings kept them serviceable, even if not for their original functions, for 65–125 years (cf. Dagradi Reference Dagradi and Ortolani1961: 97). Archaeologists who interpret earthen structures and associated activities should then consider the past use-lives of the buildings over multiple generations.

This research received no specific grant from any funding agency or from commercial and not-for-profit sectors.

Figure 1. View of the study area in the Fucino Basin (photograph by G. Shaffer).

Figure 2. Detail of the earthen wall of Via Circonfucense's capanna, showing the distinctive straw temper (photograph by G. Shaffer).

Figure 3. a) North-east corner of the capanna; b) plan of the capanna (drawing by R. Hall; wall thickness estimated due to inaccessibility).

Figure 4. a) South elevation of Via Circonfucense's stalla with beams for harnesses left of window; b) plan of the stalla (drawing by R. Hall; stalla approximately 3m east of capanna).