Sperm whales in the Neolithic Mediterranean: a tooth from the sanctuary of Monte d'Accoddi (Sardinia, Italy) 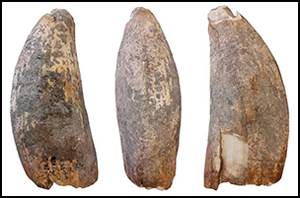 The exceptional find of the tooth of a sperm whale (Physeter macrocephalus) at Monte d'Accoddi adds to the documentation on the possible presence, and exploitation by humans, of cetaceans in the prehistoric Mediterranean. The dating (3638–3378 BC) appears to make it the oldest cetacean find in Sardinia.

The use of cetaceans as a food source is sporadically documented in Europe since the Middle Palaeolithic (Benito et al. Reference Benito, Sanchis, Beneyto, Benito and Sanchis2019), while the exploitation of bones and teeth is noted from the Upper Palaeolithic (Pétillon Reference Pétillon, Smolderen, Gillard and Cattelain2018). The use of ivory derived from large marine and land mammals is confirmed by fairly common finds of artefacts (Álvarez Fernández Reference Álvarez Fernández2002). Palaeolithic and Mesolithic depictions of cetaceans, among them the sperm whale, underline the interest that human groups have shown in them (Serangeli I. Dalmau Reference Serangeli I. Dalmau2001); this is still further emphasised by finds far from coastal areas, which are evidence of the circulation of raw materials over medium and long distances (Pétillon Reference Pétillon, Smolderen, Gillard and Cattelain2018). The importance of cetaceans, and of the sperm whale in particular, is highlighted during the Neolithic through the presence of symbolic figures on fifth-millennium BC megalithic monuments along the European Atlantic coast, as well as more rarely in inland France (Huet Reference Huet, Guilaine and Garcia2018). Despite its geographic distance, it is also interesting to note a rock engraving in South Korea (6000–1000 BC), in which cetaceans, including the sperm whale, represent 19.9 per cent of the total figures present (Schuhmacher et al. Reference Schuhmacher2013).

The presence of cetacean remains in the Mediterranean, which are concentrated chiefly around the Spanish coast, is lower compared with the Atlantic. During the transition from the Mesolithic to the Neolithic cetaceans are attested in the Uzzo Cave (Sicily), where episodes of beaching relating to rapid climate change around 8200 years BP are evident (Mannino et al. Reference Mannino2015). A depiction of a dolphin from the nearby Levanzo Cave can be dated to the Final Neolithic/Early Eneolithic (Tusa Reference Tusa, Anati, Mensi and Marretta2004). Remains of vertebrae have been found in the Aegean at Saliagos (4200–3700 BC) and Phaistos (4500–3300 BC) (Benito et al. Reference Benito, Sanchis, Beneyto, Benito and Sanchis2019). Finds of cetacean remains become more common during the Eneolithic pre-Bell Beaker and Bell Beaker periods along the European Atlantic coast (Benito et al. Reference Benito, Sanchis, Beneyto, Benito and Sanchis2019), and less frequently in the Western Mediterranean. Added to these is a sperm whale tooth, found on the Atlantic coast of Morocco in a Neolithic context (3495–2885 BC) (Charon et al. Reference Charon, Ortlieb and Petit-Maire1973). In the French Midi, dolphin remains can be found in the Final Neolithic (c. 3300–2500 BC) (Cauliez et al. Reference Cauliez, Fouéré, Chevillot, Courtaud, Ferullo and Leroyer2007). Along with bone remains, there is also a widespread presence of ivory objects made from large marine and land mammals.

During the third millennium BC finds of sophisticated ivory objects from African and Asian elephants become more frequent in funerary contexts (Castrillo Jimenez Reference Castrillo Jimenez2020), thereby providing evidence for the exchange of prestige goods between the Eastern and Western Mediterranean. In Sardinia the earliest ivory objects are related to the Bell Beaker phenomenon and come from both African and Asian elephants (Morillo et al. Reference Morillo, Pau and Guilaine2018). From the Bronze Age onwards the production of ivory objects intensified, using mostly elephant tusks. In Sardinia cetacean bone remains were found in a Nuragic tomb (Speller et al. Reference Speller2016). Evidence for the use of ivory from sperm whale teeth is much rarer, although known in some Iberian Chalcolithic sites (Schuhmacher et al. Reference Schuhmacher2013; Liesau et al. Reference Liesau, Ríos and Blasco2020).

The shrine of Monte d'Accoddi: archaeological and radiocarbon data

During excavations in 1959, a sperm whale (Physeter macrocephalus) tooth was found in the upper levels of trench XII-NE (Figures 2–3); it bore incisions that could be interpreted as the start of some kind of process of working. It seems likely that at the time it was found—during the last moments of the final excavation—it went unrecognised, as there is no mention of it in the site diary. It was later sent, together with the other faunal finds, to the Museo di Scienze Naturali in Bergamo to be studied; however, this study was never undertaken. In 2014 all the material from the excavation was returned to Sassari, and the tooth was finally confirmed as the only sperm-whale find.

Figure 2. Plan of the site and location of the find (red star) (after Melis Reference Melis2011).

Radiocarbon-dating of the tooth (LTL 20016A; 4755±40 BP, 3638–3436 BC, at 2σ) (Figure 4) places it between the end of the Neolithic and the start of the Eneolithic, in a period shortly before the rebuilding of the monument. The most likely explanation for the presence of a sperm whale tooth at Monte d'Accoddi is that it was found on the nearby beach, 3.4km away. Nevertheless, it cannot be discounted that the tooth came to Sardinia as part of obsidian exchange networks with the French and Catalan coasts.

The find is significant for several reasons. It was most likely destined to be used for making artefacts, confirming that domestic activities accompanied the ritual life practised at the shrine since the Final Neolithic. Despite never being completed and used as an artefact, the tooth is the earliest evidence for the presence of ivory in Sardinia; no other ivory artefacts have been found at Monte d'Accoddi. Finally, the dating of the tooth to the Late Neolithic to Early Eneolithic places it earlier than the period of the broadest use of ivory in Europe and the Mediterranean, which was during the Bell Beaker phase in the second half of the third millennium BC (Schuhmacher Reference Schuhmacher, Bartelheim, Ramírez and Kunst2017).

The research was supported by the University of Sassari.

Sperm whales in the Neolithic Mediterranean: a tooth from the sanctuary of Monte d'Accoddi (Sardinia, Italy)
×

Sperm whales in the Neolithic Mediterranean: a tooth from the sanctuary of Monte d'Accoddi (Sardinia, Italy)
×

Sperm whales in the Neolithic Mediterranean: a tooth from the sanctuary of Monte d'Accoddi (Sardinia, Italy)
×
×