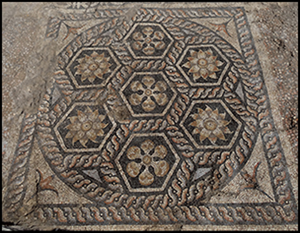 The residential architecture of Alexandria has traditionally been extrapolated based on comparison with the plans and decoration of monumental hypogea from the Ptolemaic and Roman periods. New evidence from an archaeological research programme launched at Kom el-Dikka offers novel insights into the style of domestic architecture and the urban topography of the city.

Alexandria, like other ancient cities, had a built-up area, in which regular housing must have comprised around 70–80 per cent of the urban area. Domestic architecture, however, remains on the margins of targeted archaeological research at Alexandria—lagging far behind work on temples, churches, other public buildings and cemeteries. The reason for this is as banal as it is obvious: with so few surviving archaeological examples available, very little research can be done. A breakthrough came with the Polish Centre of Mediterranean Archaeology, University of Warsaw's archaeological project on Kom el-Dikka. Remnants of dwellings have been explored at this site since the 1990s, but it is only recently that the investigation gained new momentum. In 2017, a new phase of the project was launched, focusing on two closely related issues: the residential architecture and the street network.

As many as ten of the approximately 13 Roman houses known so far from Alexandria were uncovered at Kom el-Dikka (Tkaczow Reference Tkaczow1993; Majcherek Reference Majcherek, Galor and Waliszewski2007) (Figure 1). These buildings, constructed predominantly in the first and second centuries AD, provided the much needed archaeological evidence to address a key research focus: analysis of the layout, internal decoration and functional design of these houses, in an attempt to define a ‘standard’ Alexandrian Roman domus (house), and to situate this evidence within its wider Mediterranean context. 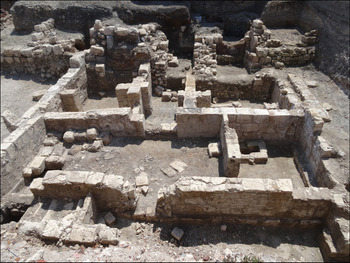 Figure 1. Extant walls of an early Roman house excavated in the 2019 season (photograph by G. Majcherek).

An obvious link between houses, city blocks and, by extension, the street network emerges repeatedly in our research. Although the basic street grid identified in the nineteenth century by Mahmud Bey el-Falaki (Reference el-Falaki1872) is generally accepted and—despite some reservations—remains the fundamental system of urban morphology, later attempts at calculating the size of the city blocks using dimensions of a basic house lot produced somewhat equivocal results (e.g. Rodziewicz Reference Rodziewicz1984: 45–48). 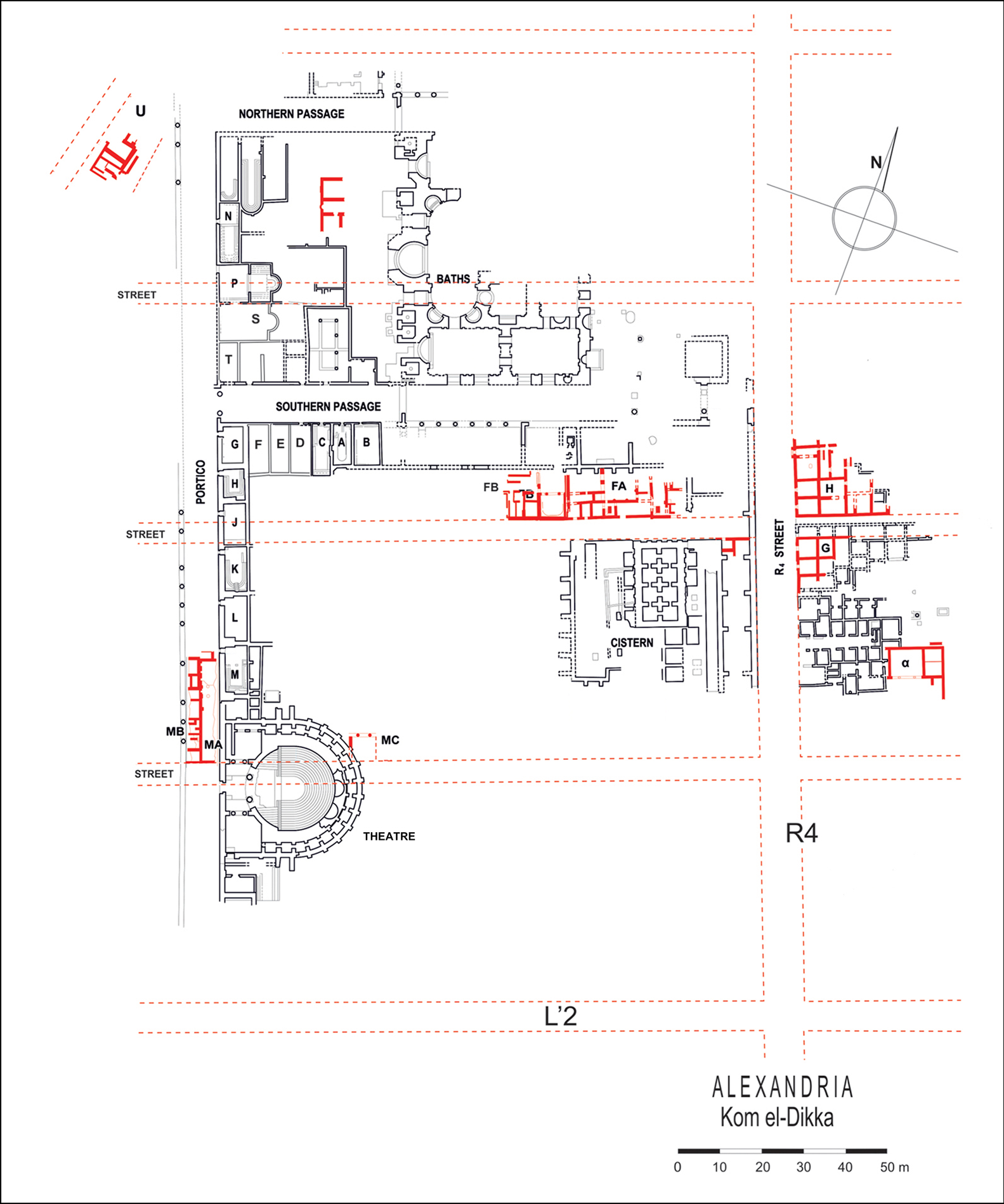 According to a hypothesis introduced by Wolfram Höpfner (Reference Höpfner1990), based largely on parallels from other Hellenistic cities, large insulae (city blocks) were divided into smaller blocks by two narrow latitudinal streets and five longitudinal streets. These produced areas containing six square house-lots, each covering approximately 22 × 22m. Our excavations at Kom el-Dikka, however, revealed the distance between the narrower ‘secondary’ streets to be approximately 52–53m; if their disposition is regular and symmetrical, as expected, then a simple calculation proves that each of Falaki's (Reference el-Falaki1872) basic insulae must have been split by four parallel streets, and not the two proposed by Höpfner (Reference Höpfner1990).

It has often been assumed that the orthogonal Hippodamian grid was the standardised plan for the entire city (e.g. Rodziewicz Reference Rodziewicz1987). Data obtained from excavation in the north-western part of Kom el-Dikka, however, offer a slightly different view. While the orthogonal grid at Kom el-Dikka is oriented north-west to south-east, a small section of a street uncovered there follows a north–south orientation, which departs from the orthogonal model identified by Falaki (Figure 2). Although the street-grid issue is not yet fully resolved, another aspect of our research— the layout of the houses—is far better documented, even at this stage of the project.

The excavated houses were designed on a rectangular plan, in two rows (back-to-back), each entered from a respective side street through a prothyron—a stepped porch—a common feature in local architecture, and known from Roman Fayoum (Figure 3). A key element of the layout was invariably the central courtyard (Figure 4). In terms of architectural decoration, the dominant design is a pseudo-peristyle, with engaged columns featuring plain shafts topped with Doric capitals (Figure 5). Triclinia—dining rooms—were revealed in all of the houses. These were usually entered through tripartite doorways, accentuated by columns, leading directly from the central courtyard. Their floors were decorated with mosaics, ranging from simple bichrome geometric designs to the more complex patterns that combine geometric elements with figural motifs, complete with colourful emblemata (central panels that were often highly decorative and finely worked) (Figure 6) (Majcherek Reference Majcherek and Hawwas2002). Notably, all of these floor mosaics post-date the period of construction of the houses, which was established from stratigraphic archaeological evidence, and may possibly be associated with Alexandria's alleged revival in the second century AD. 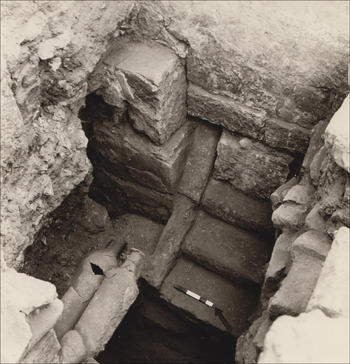 Figure 3. Stepped entrance to one of the houses (photograph by G. Majcherek). 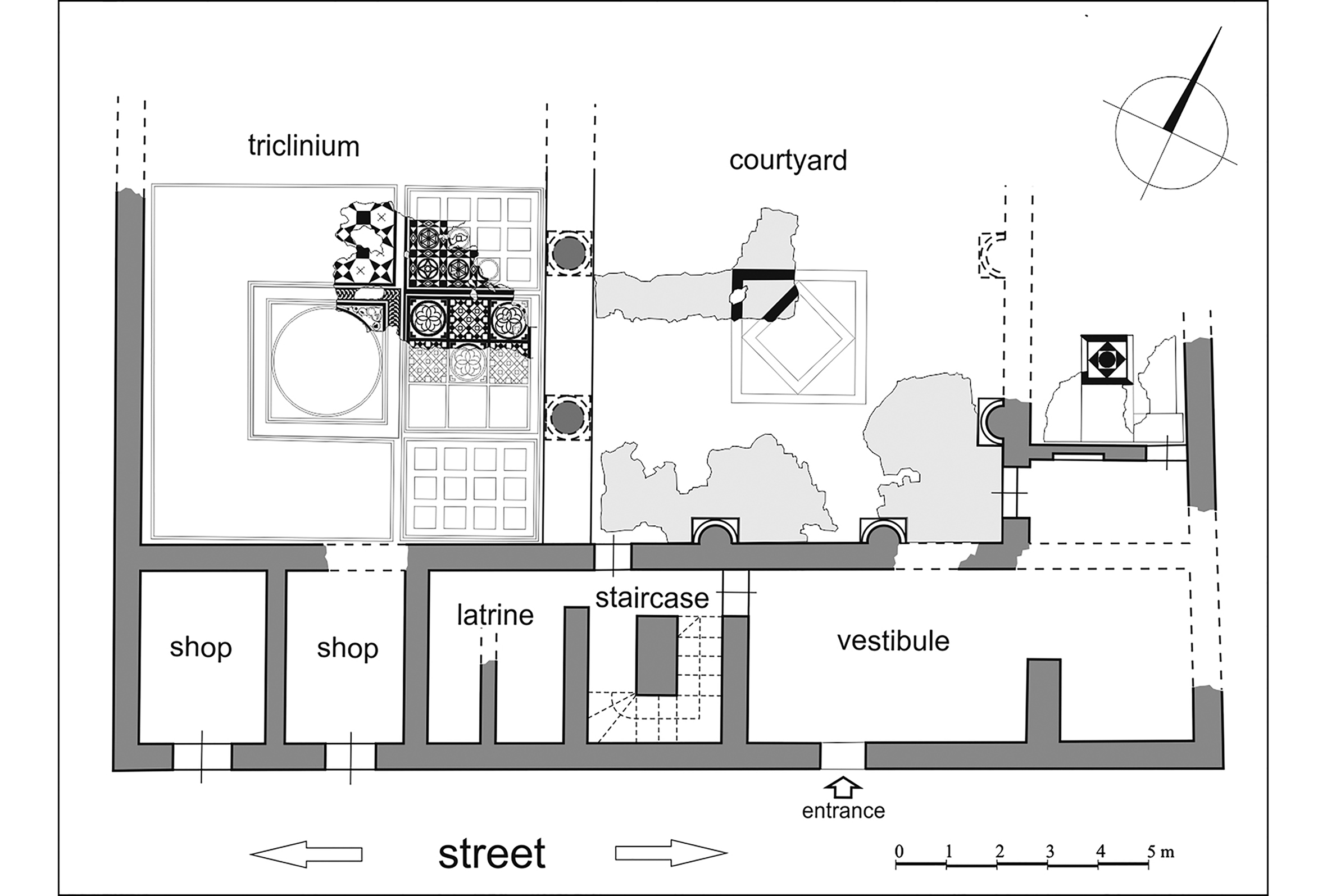 Figure 4. Plan of an early Roman house uncovered in the central area of the site (drawing by G. Majcherek & Z. Solarewicz). 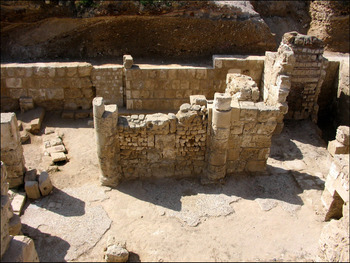 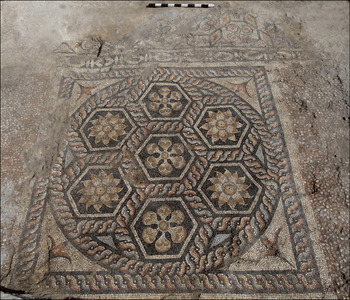 Figure 6. A multicoloured mosaic decorating one of the triclinia (photograph by G. Majcherek).

In contrast to the mosaics’ decorative motifs, which were drawn from a common iconographic vocabulary of the Classical Mediterranean world, the architectural decoration of the houses at Kom el-Dikka appears to be almost exclusively typical of Alexandria. There is an entire range of distinctive cornices with square modillions and capitals, representing the so-called Alexandrian style. Samples of painted wall plaster collected from some of the houses resemble the First Pompeian (‘structural’) style, with the high monochrome socles and stuccowork, imitating opus isodomum (uniformly sized stonework). Similar decoration is known from the second-century BC tombs in the Anfushy and Mustapha Pasha necropolises (Adriani Reference Adriani1952: 47–128). The examples from Kom el-Dikka of apparently later date (mostly first century AD) demonstrate the continuity of the Hellenistic painting tradition in Alexandria over several centuries.

This research on the houses at Kom el-Dikka challenges a commonly accepted view—based predominantly on comparative analyses of extant sepulchral monuments—that the Alexandrian house design was derived from the peristyle model, which had replaced older designs in the second century BC (Adriani Reference Adriani1966: 201–209). It now appears that this building tradition drew on both the Greek peristyle and the oikos (the main governing room) house-planning models, while adapting specific elements to suit local needs, and thus confounding attempts to identify a uniform classification. Alexandrian houses at Kom el-Dikka clearly constitute a separate local type that brings together the prostas-oikos (porchway-main room) design and a pseudo-peristyle courtyard. Whether this was intentional design, or simply a practical compromise forced by the small size of urban plots in the city centre, we will probably never know. It is hardly surprising that Roman Alexandria's houses draw on a common Graeco-Roman building tradition, but their undeniable allegiance to the Mediterranean world belies the inclusion of indigenous Egyptian elements.

I would like to express my sincere gratitude to all colleagues involved in the research. Special thanks go to all the authorities of the Egyptian Ministry of Antiquities in Cairo, as well as in Alexandria for their generous help and support of our work.

Our research is financed by the Polish Centre of Mediterranean Archaeology, University of Warsaw as part of the long-term multidisciplinary ‘Archaeological and Preservation Project at Kom el-Dikka’.