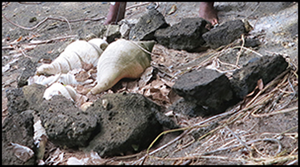 At the time of European contact, Torres Strait, New Guinea and northern Australia were home to highly restricted fraternities focused on warfare, headhunting and mortuary rituals. Masked dancers, representing spirits of the dead, initiated the next generation into secrets reputedly brought by a pantheon of wandering heroes, such as Waiat. A new project explores the deep history of Islander traditions, excavating initiation places associated with Waiat. In so doing, it demonstrates the advantages of collaborative history-building using archaeology and traditional knowledge.

This project focuses on mythologies associated with the ‘culture hero’ Waiat. Our definition of mythologies follows that of the Oxford English Dictionary as “A body or collection of myths, esp. those relating to a particular person or thing, or belonging to a particular religious or cultural tradition” (Oxford English Dictionary Online 2020). Waiat, also named ‘Wayath’, ‘Uiat’ or ‘Naga’ in Central Torres Strait (CTS) and Western Torres Strait (WTS), and ‘Waiet’ in Eastern Torres Strait (ETS), brought new sacred knowledge to communities he visited along a 230km pathway from Woeydhul (Widul) in WTS to Waier in ETS (Cygnet Repu pers. comm.; Figure 1). This information was shared during restricted male-only initiation and mortuary ceremonies (tai, terai or markai), still practised during the mid nineteenth century (Haddon Reference Haddon1935; Figure 2). 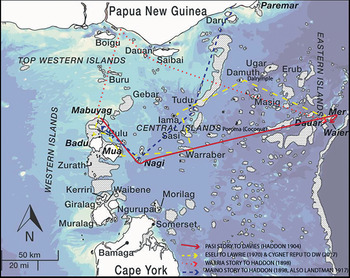 Figure 1. Waiat and Naga's pathway through Torres Strait (courtesy of the University of Cambridge Museum of Archaeology and Anthropology, Cambridge). 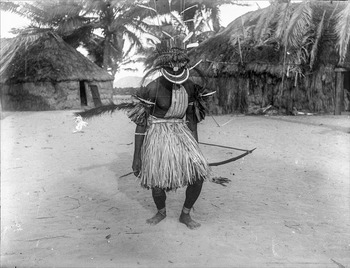 Figure 2. Haddon's 1898 photograph of a Markai dancer (courtesy of the University of Cambridge Museum of Archaeology and Anthropology; accession number N.23028.ACH2-003).

The ‘Waiat Archaeology Project’ exemplifies ways in which archaeologists and Indigenous communities may work together to achieve individual and common goals. The project was initiated in 2014 when one of the authors (Cygnet Repu) approached the Meriam community, through Falen D. Passi and archaeologist Duncan Wright. To protect participants from a culture hero whose powers are seen to be dormant rather than dissipated, Elders from Lag Mabuyag and Murray organised a meeting with a formidable turtle shell effigy representing Waiat. Located at Queensland Museum in Brisbane, this stands five feet tall, and is decorated with human rib and jaw bones. These bones echo sacrifice and/or headhunting elements that reputedly occurred during annual initiation ceremonies (Pasi, in Haddon Reference Haddon1935: 402–403).

Project direction was negotiated between 2014–2017, with discussions involving Elders from Murray and Lag Mabuyag Islands. By the end of this period, decisions had been made about how best to historicise the Waiat mythology. Specifically, the team would:

Levi-Strauss (Reference Levi-Strauss1966: 257; see also Whitely Reference Whitely2002) suggested that all narratives about the past (whether historic or mythic) involve human subjectivities, interests and power relations. Systematic history-building requires exploration of consistency and contradiction within and between these datasets and epistemologies. Torres Strait arguably offers an ideal opportunity to develop this approach, with its rich corpus of ethnographic, archaeological and museum materials associated with culture heroes and commemorative (mortuary and initiation) ceremonies.

To examine consistency (or otherwise) across Torres Strait and through time, qualitative data, gathered from stories and songs, were analysed statistically using NVivo, a qualitative data-analysis computer software package. This provides word and concept frequencies as they emerge, and produces matrices facilitating the investigation of relationships between each concept. It is then possible to assess whether themes intersect with archaeology (e.g. the role of dead ancestors and ceremony seasonality).

In 2016, Dauareb (who speak for Dauar and Waier Islands) assisted with archaeological excavation of Waiet's Lodge at Ne. This represents the first (and only) sub-surface study of Waier Island, and one of only two academic archaeological projects set in ETS—the other being ‘The Murray Islands Archaeology Project’ (e.g. Carter et al. Reference Carter, Barham, Veth, Bird and O'Connor2004). 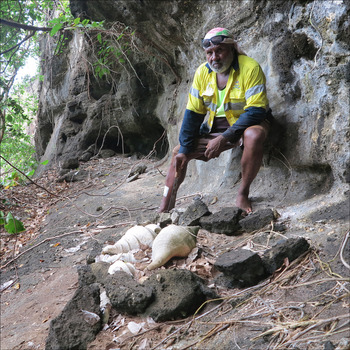 A surface cluster of human bone and Cypraea sp. shells was found within a Ne rockshelter. Shellfish from this feature, and from the aforementioned Waiet installations, returned radiocarbon dates of 81–297 cal BP (at 95% probability; Reimer et al. Reference Reimer2013) (Table 1). This corresponds to a nineteenth-century estimate for the date of associated ritual paraphernalia including turtle-shell masks (Haddon Reference Haddon1935; Philp Reference Philp2015). Estimates were based on typo-chronologies and the presence of European human bones including ribs from “a white boy” in the Waiet effigy (Pasi, cited in Haddon Reference Haddon1935: 399).

The onset of mortuary activities is likely to have been considerably earlier. In all three excavations, human remains (including semi-articulated ribs and a vertebra) continued into layers with a maximum age of 1692–1883 cal BP. A shift was noted in layers post-dating 493–614 cal BP, involving increased quantities of culturally pre-dated and ochre-painted shellfish. These mirror elements recounted within the Waiet ethnographies. 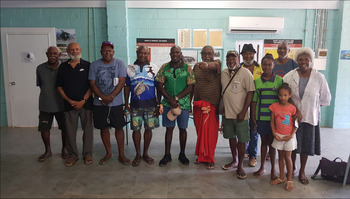 Complex histories of ritual emplacement were demonstrated at Ne, involving the earliest archaeological evidence for funerary activities (<1700 cal BP) so far recorded for Torres Strait. Mortuary traditions alter over time, interpreted by Dauareb as evidence for the negotiated process by which Elders residing in ETS responded to Waiat's arrival. Alo Tapim and Segar Passi (pers. comm.) suggest that similar negotiation occurred when Christianity arrived in Torres Strait, with elements of earlier Malo and Waiat culture heroes embedded within this new religion.

In 2021, the project will expand to Mer, undertaking geochemical provenancing of exotic sacred stones reputedly commemorating the journey of Waiat. A Waiat gathering is planned on Lag Mabuyag in order to share stories, further cementing the contemporary significance of the Waiat culture hero.

Thanks to the Goemulgaw, Meriam and Dauareb (also the Australian Research Council) for supporting this project. We recognise the contribution from Lag Mabuyag and Murray Elders including Terrence Whap, Dimple and Gabriel Bani, Alo Tapim, Segar Passi, Ron Day, James Zaro, Balaga Zaro and Baimop Tapim. Thanks also to Rod Mitchell for linguistic advice; to the Museum of Archaeology and Anthropology in Cambridge for providing access to the Haddon archive and Figure 2; and the Museum für Völkerkunde Dresden for approving the use of Figure 3.

This project was supported by Australian Research Council grant (LP140100387).