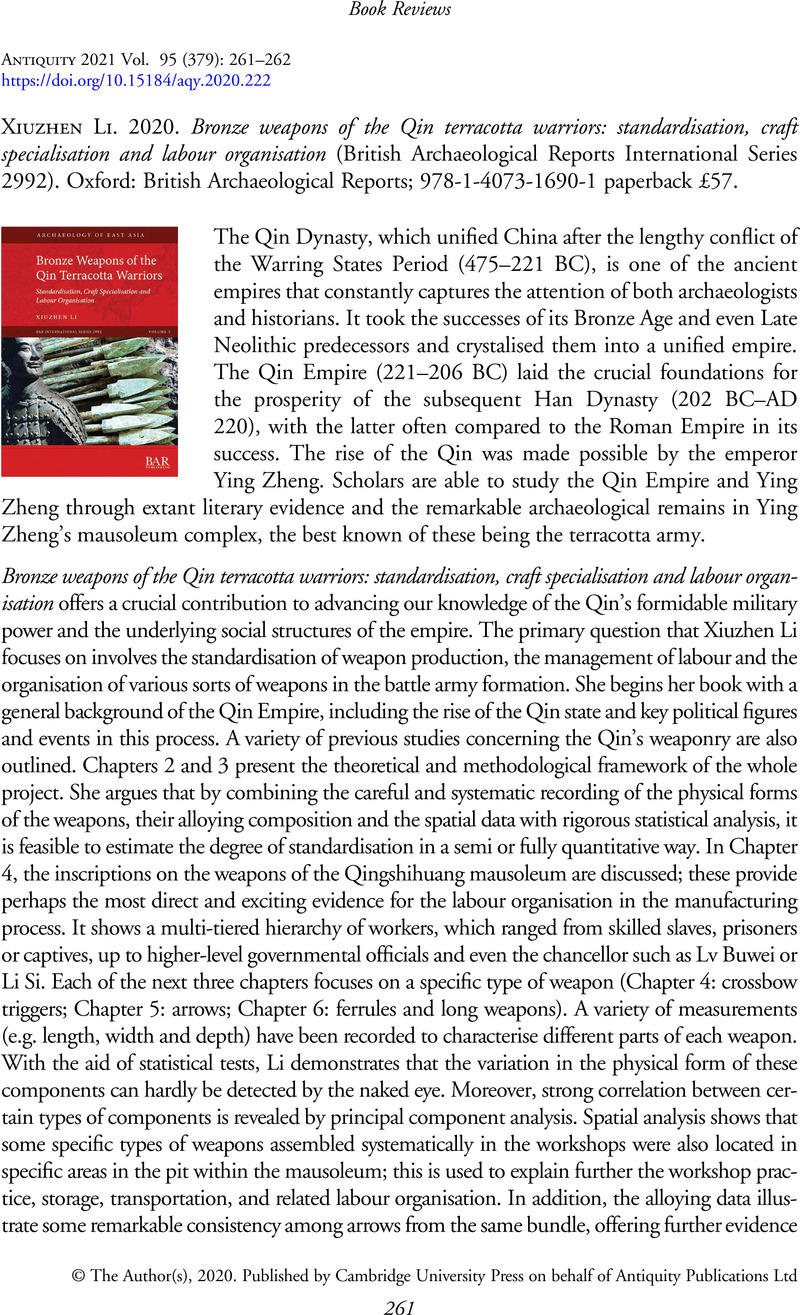 An abstract is not available for this content so a preview has been provided. To view the full text please use the links above to select your preferred format.
Type
Book Reviews
Information
Antiquity , Volume 95 , Issue 379 , February 2021 , pp. 261 - 262
DOI: https://doi.org/10.15184/aqy.2020.222[Opens in a new window]
Copyright
Copyright © The Author(s), 2020. Published by Cambridge University Press on behalf of Antiquity Publications Ltd 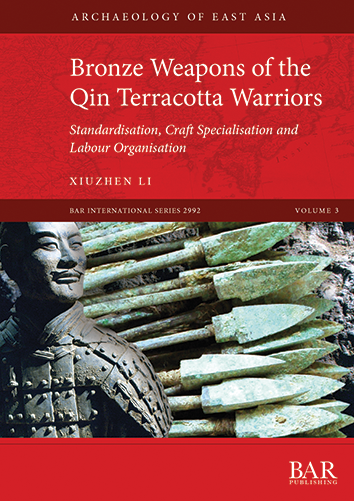 The Qin Dynasty, which unified China after the lengthy conflict of the Warring States Period (475–221 BC), is one of the ancient empires that constantly captures the attention of both archaeologists and historians. It took the successes of its Bronze Age and even Late Neolithic predecessors and crystalised them into a unified empire. The Qin Empire (221–206 BC) laid the crucial foundations for the prosperity of the subsequent Han Dynasty (202 BC–AD 220), with the latter often compared to the Roman Empire in its success. The rise of the Qin was made possible by the emperor Ying Zheng. Scholars are able to study the Qin Empire and Ying Zheng through extant literary evidence and the remarkable archaeological remains in Ying Zheng's mausoleum complex, the best known of these being the terracotta army.

Bronze weapons of the Qin terracotta warriors: standardisation, craft specialisation and labour organisation offers a crucial contribution to advancing our knowledge of the Qin's formidable military power and the underlying social structures of the empire. The primary question that Xiuzhen Li focuses on involves the standardisation of weapon production, the management of labour and the organisation of various sorts of weapons in the battle army formation. She begins her book with a general background of the Qin Empire, including the rise of the Qin state and key political figures and events in this process. A variety of previous studies concerning the Qin's weaponry are also outlined. Chapters 2 and 3 present the theoretical and methodological framework of the whole project. She argues that by combining the careful and systematic recording of the physical forms of the weapons, their alloying composition and the spatial data with rigorous statistical analysis, it is feasible to estimate the degree of standardisation in a semi or fully quantitative way. In Chapter 4, the inscriptions on the weapons of the Qingshihuang mausoleum are discussed; these provide perhaps the most direct and exciting evidence for the labour organisation in the manufacturing process. It shows a multi-tiered hierarchy of workers, which ranged from skilled slaves, prisoners or captives, up to higher-level governmental officials and even the chancellor such as Lv Buwei or Li Si. Each of the next three chapters focuses on a specific type of weapon (Chapter 4: crossbow triggers; Chapter 5: arrows; Chapter 6: ferrules and long weapons). A variety of measurements (e.g. length, width and depth) have been recorded to characterise different parts of each weapon. With the aid of statistical tests, Li demonstrates that the variation in the physical form of these components can hardly be detected by the naked eye. Moreover, strong correlation between certain types of components is revealed by principal component analysis. Spatial analysis shows that some specific types of weapons assembled systematically in the workshops were also located in specific areas in the pit within the mausoleum; this is used to explain further the workshop practice, storage, transportation, and related labour organisation. In addition, the alloying data illustrate some remarkable consistency among arrows from the same bundle, offering further evidence that the same batch of weapons produced in the workshop was given to warriors who stand in specific positions. Among the various conclusions drawn in the last chapter, the one which I find most thought-provoking is Li's ‘cellular model’. She argues that because production was undertaken by individual cells in a workshop, there is strong consistency between weapons produced by the same cell and a contrast with those produced by different cells.

A number of archaeological and methodological contributions to this book are noteworthy. Ancient China is famed for its tradition of mass production: examples can be found from the Late Neolithic to Bronze Age and include pottery, jade, bronzes or lacquer. The weapons excavated from the mausoleum of Qin's first emperor undoubtedly mark the zenith of this well-established tradition. It is wonderful to see that this systematic and in-depth study of inscriptions reveals concrete evidence for the role of a strict political hierarchy in the supervision and organisation of the workshop, as well as for the identities of the craftspeople. These discoveries are exciting as they can, perhaps, be projected onto earlier periods, for instance, the mass production of metal objects at Anyang (c. 1300 BC–1045 BC). In addition to the hierarchical structure, the cellular model also provides new insights. It explains various data clusters revealed by the typological, metric, chemical and statistical analyses, and echoes the way in which the Qin Empire implemented quality control and accountability for weapon production (see also Martinón-Torres et al. Reference Martinón-Torres, Li, Bevan, Zia, Zhao and Rehren2014). Again, this model was likely to have been followed in the production of other crafts during the Qin period or earlier.

This monograph marks a critical step forward in combining multi-disciplinary methods in Chinese archaeology. It offers an excellent case study of quantitative typological analysis, which builds critical foundations for the spatial analysis in subsequent chapters. The book is accessible, and its statistical and spatial analyses vividly illustrate the great potential of big-data approaches to archaeological research. Some very minor issues are the imprecise dates for the Early Bronze Age sites, such as Erlitou (c. 1750–1600 BC), and that given the large number of figures and diagrams in the book, a digital version allowing much higher resolution would be more convenient. Although the current samples represent only approximately one-fifth of the overall site, on-going excavation will undoubtedly reveal more materials. The methodology, conclusions and hypotheses in this work set up a heuristic research framework for future studies. In summary, this is a fascinating piece of research integrating science, archaeology and history, and I am very happy to recommend it to scholars and students who are interested in Chinese archaeology and data analysis.