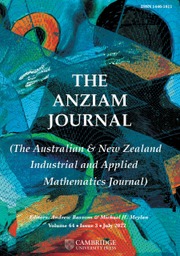 A NOTE ON NAVIER–STOKES EQUATIONS WITH NONORTHOGONAL COORDINATES

Part of: Equations of mathematical physics and other areas of application

There are many fluid flow problems involving geometries for which a nonorthogonal curvilinear coordinate system may be the most suitable. To the authors’ knowledge, the Navier–Stokes equations for an incompressible fluid formulated in terms of an arbitrary nonorthogonal curvilinear coordinate system have not been given explicitly in the literature in the simplified form obtained herein. The specific novelty in the equations derived here is the use of the general Laplacian in arbitrary nonorthogonal curvilinear coordinates and the simplification arising from a Ricci identity for Christoffel symbols of the second kind for flat space. Evidently, however, the derived equations must be consistent with the various general forms given previously by others. The general equations derived here admit the well-known formulae for cylindrical and spherical polars, and for the purposes of illustration, the procedure is presented for spherical polar coordinates. Further, the procedure is illustrated for a nonorthogonal helical coordinate system. For a slow flow for which the inertial terms may be neglected, we give the harmonic equation for the pressure function, and the corresponding equation if the inertial effects are included. We also note the general stress boundary conditions for a free surface with surface tension. For completeness, the equations for a compressible flow are derived in an appendix.

A NOTE ON NAVIER–STOKES EQUATIONS WITH NONORTHOGONAL COORDINATES
×

A NOTE ON NAVIER–STOKES EQUATIONS WITH NONORTHOGONAL COORDINATES
×

A NOTE ON NAVIER–STOKES EQUATIONS WITH NONORTHOGONAL COORDINATES
×
×