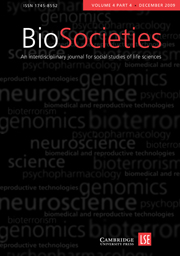 In this article I maintain that different constellations of political and socio-economic interest groups lead to diverging approaches to defining research targets in population genetics. First, I show how different political and socio-cultural views of possible target groups in the People’s Republic of China and in the Republic of China have crucial consequences for the ways in which scientists define their research subject, collect and interpret their genetic samples, and conduct their research. Thus the unit of research, or group delineation, in genetic population studies cannot be viewed separately from its political and social context. Second, examples from population genetics in the People’s Republic of China are used to show how genetic approaches to populations are necessarily mediated by social and political categories, which may or may not lead to conflicting interpretations of genetic data. Finally, in China and Taiwan research target groups are defined through different cultural and political perceptions intimately linked to these two nations’ positions as players on the international political and diplomatic stage. Moreover, international and national competition and research politics affect sampling strategies and the selection of research populations. The political and economic issues related to the definition of socio-genetic groups are shown to have implications for bioethical debates.