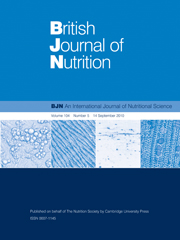 Conference presentation: This work was presented as a poster in the 30th Congress of ESPEN, Florence, Italy, 13–16 September 2008. It was selected as one of the 100 best communications of the Congress. Clinical trial registration number: 2008-007005-36.