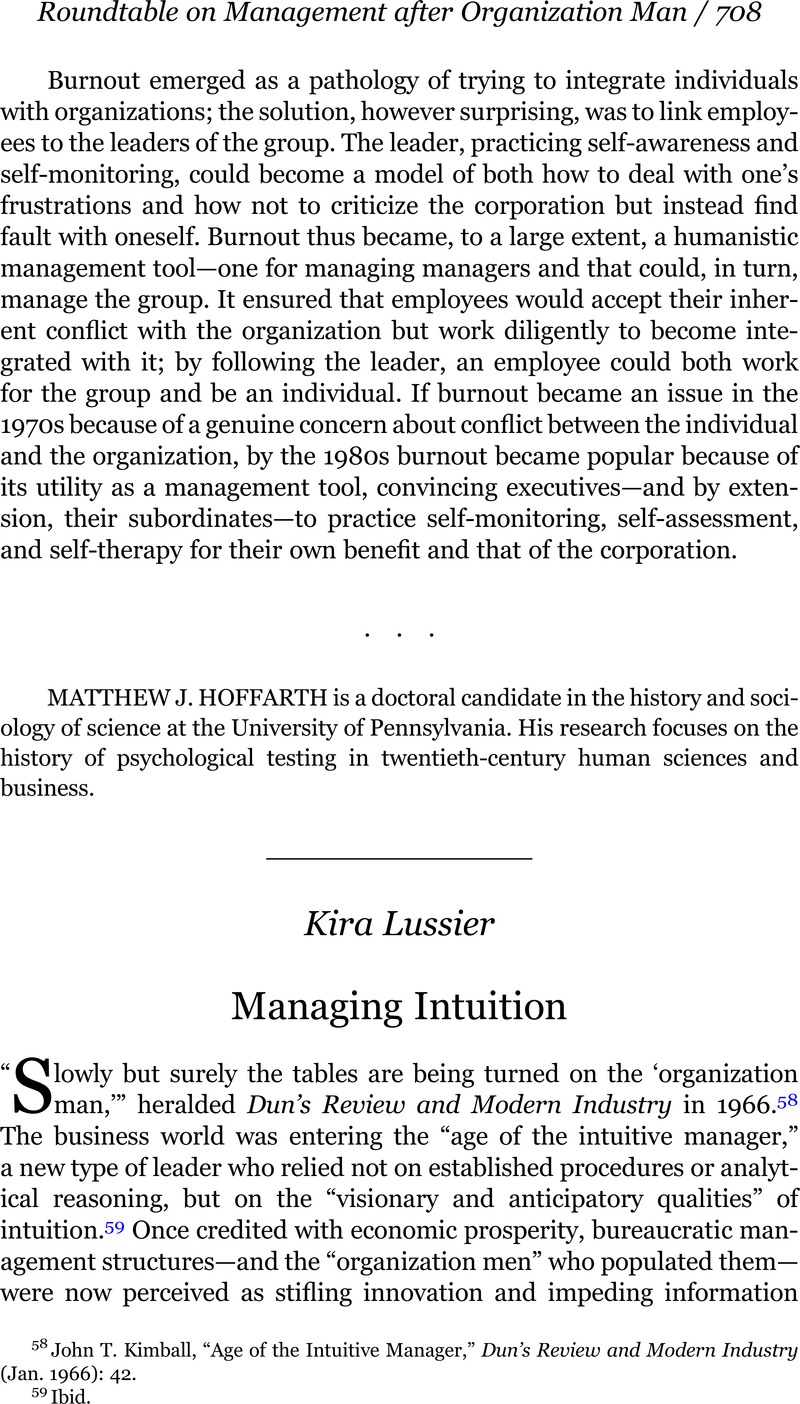 COPYRIGHT: © The President and Fellows of Harvard College 2017

63 Intuition's long association as a feminine mode of reasoning was certainly part of the skepticism toward its emotional element.

67 Peter Drucker coined the term “knowledge worker” to refer to workers who dealt in manipulation of symbols and ideas. Drucker, , Landmarks of Tomorrow (New York, 1959).

68 One can find variants of these questions in numerous surveys, including the Human Information Processing Survey. Taggart, William and Valenzi, Enzo, “Assessing Rational and Intuitive Styles: A Human Information Processing Metaphor,” Journal of Management Studies 27, no. 2 (1990): 149–72; Raudsepp, Eugene, “How Creative Are You?” Personnel Journal 58, no. 4 (1979): 218–19.

72 Beat poet Kenneth Rexworth gave a colorful, and critical, firsthand account of being studied at IPAR. Rexworth, “My Head Gets Tooken Apart,” The Nation, Dec. 1957.

73 From the beginning, candidates were assessed not just by formal techniques, but also on informal social behavior. According to Henry Murray and Donald MacKinnon's description, “a convivial evening party was held with hard liquor for both candidates and staff. . . . The party which lasted usually long past midnight often revealed aspects of the candidates’ personalities not seen in soberer states.” Murray, and MacKinnon, , “Assessment of OSS Personnel,” Journal of Consulting Psychology 10, no. 2 (1946): 79 .

74 The first corporate use of the assessment center was at AT&T, a program run by psychologist Douglas Bray.

75 MacKinnon met Isabel Briggs Myers while he was teaching at Bryn Mawr in the late 1940s; he subsequently brought the Myers-Briggs to IPAR.

77 Gough is an important figure in the history of psychological testing, as one of the creators of the widely used California Psychological Inventory, which he developed at IPAR.

80 Many psychologists sought to experimentally study conformity and obedience. In his doctoral work with Solomon Asch, IPAR researcher Richard Crutchfield had found that subjects under (false) social pressure would err in judging the length of lines. Even more dramatically, Stanley Milgram's 1963 experiment on obedience to authority seemed to show that ordinary individuals were willing to inflict pain on innocent strangers under pressure from an authority figure. In public discourse and psychological research, conformity was connected to the authoritarian regimes of Nazi Germany and Soviet Russia. Adorno, Theodore W., Frenkel-Brunswik, Else, Levinson, Daniel J., and Sanford, Nevitt, The Authoritarian Personality (New York, 1950); Milgram, Stanley, Obedience to Authority (New York, 1974). Historian Jamie Cohen-Cole argues that the “open-minded self,” understood as a tolerant, flexible, and creative subject, became an ideal model for the democratic subject in Cold War America as an antidote to this concern with the conformist personality. Cohen-Cole's argument suggests that intuition, as a mode of knowing that trusted the “mind's eye,” rather than blindly following business or political leaders, emerged in contrast to the conformist personality. Cohen-Cole, , The Open Mind: Cold War Politics and the Sciences of Human Nature (Chicago, 2014).

81 Ironically, William Whyte's The Organization Man identified corporate psychological testing as a force for creating homogeneous, conformist corporate peons. The appendix, “How to Cheat on Personality Tests,” even urged test-takers to offer the most boring, conventional responses to avoid being screened out for psychological abnormalities. However, a psychological instrument like the Myers-Briggs Scale, claimed to measure, and celebrate, the precise kind of traits—creativity and intuition—that Whyte feared were being stamped out by personality testing. Whyte, , The Organization Man (Garden City, N.Y., 1956).

83 One could argue, however, that higher-level managers had more latitude to make the kinds of decisions associated with intuition. But what is of interest here is how intuition was credited with managerial success.

85 On the history of consulting, see McKenna, Christopher, The World's Newest Profession: Management Consulting in the Twentieth Century (Cambridge, U.K., 2006).

86 Some management researchers used novel EEG technology to measure brain waves, attempting to localize intuition in the brain itself. However, such technology was expensive, slow, and impractical. In studies by Robert Doktor and William Taggart, e.g., the brains of different professionals—CEOs and operations researchers, accountants, and artists—were scanned to find a neurological basis for the different cognitive styles associated with such professions. See Doktor, Robert and Bloom, David, “Selective Lateralization of Cognitive Style Related to Occupation as Determined by EEG Alpha Asymmetry,” Society for Psychological Research 14, no. 4 (1977): 385–87; and Taggart, William and Robey, Daniel, “Measuring Managers’ Minds: The Assessment of Style in Information Processing,” The Academy of Management Review 6, no. 3 (1982): 375–83.

88 A conference on the MBTI hosted a talk on an early version of the HBDI, the Herrmann Participant Survey, which was used alongside the MBTI as a part of training programs for project managers in the federal government.

93 In the 1960s, management theorists and consultants advocated participatory management as an alternative to hierarchical, top-down management structures, as a way to give workers a sense of participation and responsibility in work. McGregor, Douglas, Human Side of Enterprise (New York, 1960); Raudsepp, Eugene, “Establishing a Creative Climate,” Training and Development Journal 41, no. 4 (1987): 50 .

94 Agor, Weston, “The Measurement, Use and Development of Intellectual Capital to Increase Public Sector Productivity,” Personnel Management 26, no. 2 (1997): 175–86.

100 This was encouraged by Ford Foundation funding of business schools in the 1950s, which prioritized quantitative methods. On business education, see Khurana, Rakesh, From Higher Aims to Hired Hands (Princeton, 2010); and Heyck, Hunter, Herbert A. Simon: The Bounds of Reason in Modern America (Baltimore, 2005).

101 Leavitt, “Beyond the Analytic Manager.”

106 James McKenney and Peter Keen, “How Managers’ Minds Work,” Harvard Business Review, May/June 1974, 79–90. Marketing and advertising both have a long history of entanglement with psychology; see Pettit, Michael, The Science of Deception (Chicago, 2013).