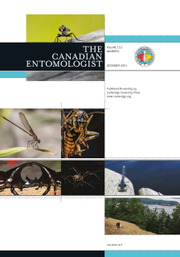 Larval morphology of the monogeneric subfamily Coptotominae (Coleoptera: Dytiscidae) is described and illustrated in detail, with particular emphasis on morphometry and chaetotaxy. Larvae of Coptotomus Say are unique within Dytiscidae in the presence of tracheal gills on the abdominal segments I–VI, a short bifid horn or nasale in instar I, long spinulae on the urogomphus in instar I, and rows of natatory setae on both the internal and external margins of the urogomphus in instars II and III. A cladistic analysis based on 125 larval characters sampled among representatives of other dytiscid subfamilies supports a sister-group relationship between Coptotominae and Laccophilinae based on the shared absence of setae LA10 and LA12 on the second labial palpomere and of pore ABc on the abdominal segment VIII. The clade Coptotominae + Laccophilinae resolved as sister to Lancetinae, all three subfamilies sharing the presence of an unusually low number of lamellae clypeales in the first instar (a condition called four-peg-pattern), postulated to have evolved secondarily within Dytiscidae.