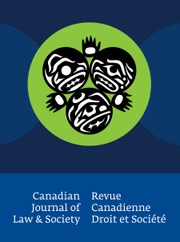 Conjugal Interdependence in Quebec: From Legal Rules to Social Representations About Spousal Support and Property Division on Conjugal Breakdown1

In the present article, we examine the extent to which legal norms related to family matters are in line with the diverse social representations of current conjugal life, more particularly as concerns the economic interdependence of the couple during or subsequent to their union. Two Quebec legal measures compel attention: the division of the family patrimony and the obligation of support payable to the former partner. The present analysis is based on an empirical study involving couples living together in Quebec. Whereas current legal discourse concerning unmarried cohabitation appears focused on spousal support, our survey has brought out two elements that could challenge the current legal approach. When it comes to social representations, we find that the awarding of support to the partner is highly controversial. The majority of our respondents also believe that the family patrimony should be shared equally, whether or not the couple is married, and more especially when there are children, the property of the household being deemed to be the fruit of a joint and family-oriented effort.

1 This research was supported by the Social Sciences and Humanities Research Council of Canada. We are indebted to Alain Roy and Robert Leckey for comments on earlier versions and to Geoffrey Vitale for the translation.

3 In Quebec, unmarried cohabitants are known as de facto spouses.

6 The Court, in fact, needed to draw a conclusion concerning a constitutional claim that the protection provided to married spouses under the Civil Code of Québec discriminated against de facto spouses, thus infringing on the right to equality as guaranteed by s 15 of the Canadian Charter of Rights and Freedoms.

8 The limitations of this survey include the size of the sample, which does not allow us to draw conclusions as to the possible differences among respondents based on gender, age, social classes, etc.

10 Civil union allows persons of the same sex or different sexes to make a public reciprocal commitment similar to that made by couples when marrying. When it was enacted, marriage was restricted to different-sex partners. The form and legal consequences of a civil union are very similar to those of a marriage. See arts 521.1 to 521.19 CCQ.

18 Art 396, for example, lays down that each spouse will contribute to the household according to their respective means; and art 397 supposes that the responsibility for the expenses incurred for the current needs of the family are binding on both spouses, independently of who actually contracted them.

19 Save for the property possessed “individually” by each spouse; for the composition of the partnership of acquests, see arts 448 et seq CCQ.

20 With respect to “Separation as to Property,” see arts 485 et seq CCQ; regarding commingling of goods, note should be taken especially of art 487 CCQ.

21 With respect to family patrimony, see arts 414 et seq CCQ. Even though the term “patrimony” conjures the image of property rights with regard to family goods, in reality, the regime of the family patrimony merely gives rise to a personal claim (debt) between the spouses, rather than to a real right (proprietary interest).

22 Art 415 CCQ describes the composition of the family patrimony as follows: “the family patrimony is composed of the following property owned by one or the other of the spouses: the residences of the family or the rights which confer use of them, the movable property with which they are furnished or decorated and which serves for the use of the household, the motor vehicles used for family travel and the benefits accrued during the marriage under a retirement plan.” The valuation date for the property making up the family patrimony signals the importance to the legislative drafters of conjugal cohabitation: whilst the default rule makes the valuation date the earlier of two events—the death of one spouse or the institution of formal proceedings (for separation from bed and board, for divorce, or for nullity of the marriage)—the court may on application by a spouse decide that the valuation date is the date when the spouses ceased living together (art 417 CCQ).

24 Arts 585 and 587 CCQ. These articles normally apply to married or civil union spouses who are separated de facto or de jure; should they be divorced, the provisions of the Divorce Act will be applied.

25 Divorce Act, RSC 1985, c 3 (2d Supp.) s 15.2(6)(a): the spousal support order is intended, among other things, to “recognize any economic advantages or disadvantages to the spouses arising from the marriage or its breakdown.” Note, too, that, while the Civil Code provides that support is ordinarily to be payable as a pension and only exceptionally as a lump sum (art 589 CCQ), the Divorce Act considers payment by lump sum on an equal footing with periodic sums (s 15.2(1)).

26 Divorce Act, s 15.2(6)(d). At the end of the 1980s, subsequent to the Supreme Court Pelech trilogy (Richardson v Richardson, [1987] 1 SCR 857; Pelech v Pelech, [1987] 1 SCR 801; Caron v Caron, [1987] 1 SCR 892), a wave of divorce-related jurisprudence strongly stressed the requirement for financial independence, arguing in favour of a clean break, with the economic ties between former spouses being speedily severed. However, the Moge decision (Moge v Moge, [1992] 3 SCR 813) made it clear that the objective of achieving economic independence was merely one of several, and that the achievement of financial autonomy was sometimes impossible, especially in the case of traditional marriages where the spouse had not worked outside the home. Quite recently, Abella and Rothstein JJ affirmed, in LMP v LS, [2011] 3 SCR 775 at para 27: “Neither does the Divorce Act impose a duty upon ex-spouses to become self-sufficient.”

27 An Act to Amend the Civil Code and Other Legislation to Promote Economic Equality Between Spouses, LQ 1989, c 55.

28 To illustrate the importance of the concept of cohabitation, we might mention the Divorce Act which, when dealing with the question of spousal support, indicates that one should take into account “the length of time the spouses cohabited,” rather than the duration of the marriage. Divorce Act, supra note 30, s 15.2(4)(a).

Conjugal Interdependence in Quebec: From Legal Rules to Social Representations About Spousal Support and Property Division on Conjugal Breakdown1
×

Conjugal Interdependence in Quebec: From Legal Rules to Social Representations About Spousal Support and Property Division on Conjugal Breakdown1
×

Conjugal Interdependence in Quebec: From Legal Rules to Social Representations About Spousal Support and Property Division on Conjugal Breakdown1
×
×