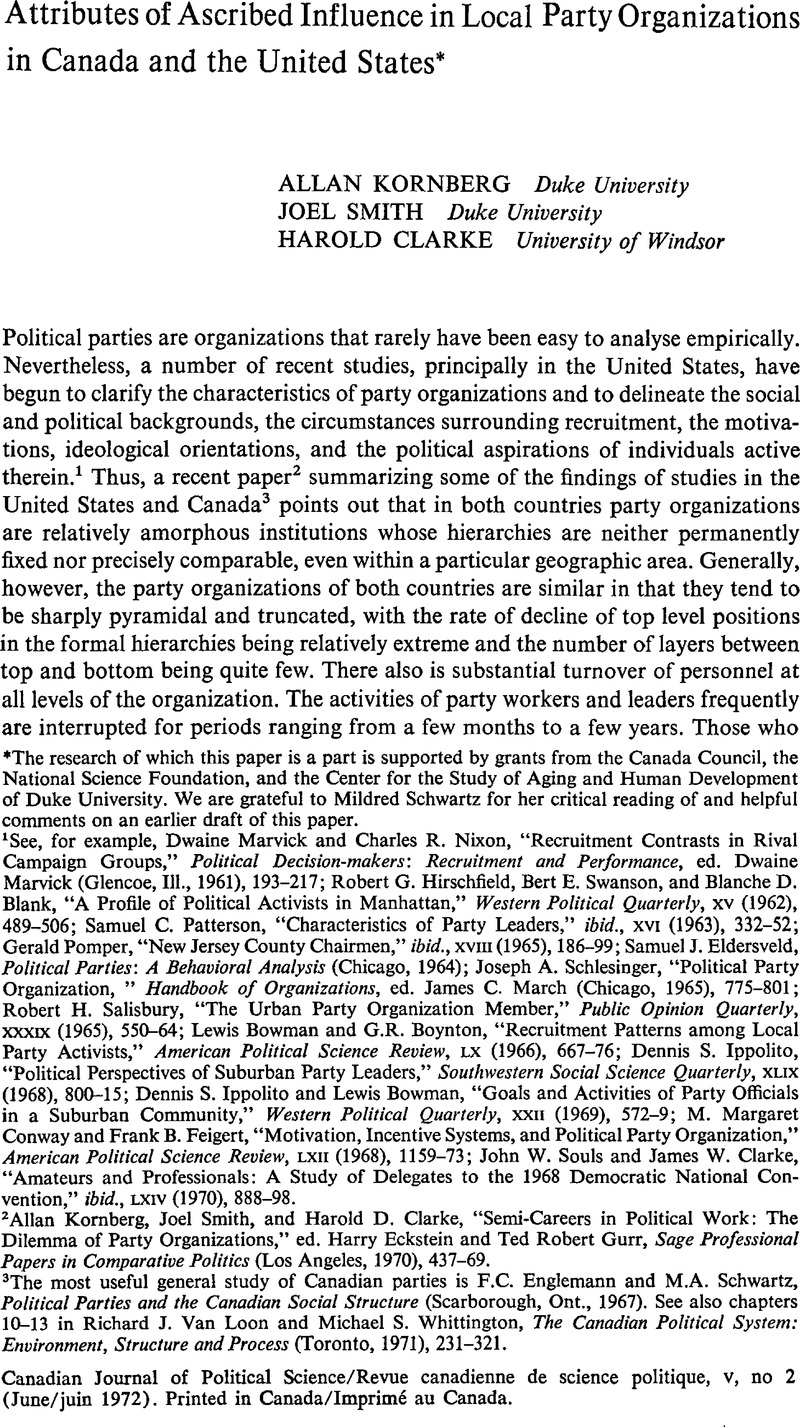 10 The reasons for the selection of Vancouver, Winnipeg, Seattle, and Minneapolis as research sites and the rationale for trying to include a total population above a certain level of scope and authority are described in detail in Kornberg, Allan and Smith, Joel, “The Development of a Party Identification in a Political Elite,” paper prepared for presentation at the American Political Science Association, Chicago, Sept. 1967, mimeo.

11 During the course of the fieldwork the interviews were monitored for the names of people cited six or more times for being “… most important people in the party organization…” As will be indicated below the data derived from this question constitute the dependent variable in the analysis. All but eleven of those cited already had been interviewed or were scheduled to be interviewed. We then tried to arrange interviews with the eleven people cited (four in the United States and seven in Canada) and were successful in completing seven interviews (three in the United States, four in Canada). The latter, therefore, are included in our population of 1252 party officials.

12 A somewhat similar attempt to define a population of party activists in both the formal and informal organizations was made by Marvick and Nixon for their study of Los Angeles. See “Recruitment Contrasts in Rival Campaign Groups,” 193–217.

14 Relevant empirical studies regarding the impact of ethnicity and religion on Canadian political behaviour include Porter, John, The Vertical Mosaic: An Analysis of Social Class and Power in Canada (Toronto, 1965); Meisel, John, “Religious Affiliation and Electoral Behaviour: A Case Study,” Canadian Journal of Economics and Political Science, XXII (1956), 481–96; Regenstreif, Peter, The Diefenbaker Interlude: Parties and Voting in Canada (Toronto, 1965); and Schwartz, Mildred A., “Political Behaviour and Ethnic Origin,” Papers on the 1962 Election, ed. Meisel, John (Toronto, 1964) 253–71. On the importance of ethnicity and religion in the United States, see works such as Dahl, Robert A., Who Governs? (New Haven, 1961); Wolfinger, Raymond, “The Development and Persistence of Ethnic Voting,” American Political Science Review, LIX (1965), 896–908; Parenti, Michael, “Ethnic Politics and the Persistence of Ethnic Identification,” ibid., LXI (1967), 717–26; Wolfinger, Raymond, “Some Consequences of Ethnic Voting,” The Electoral Process, ed. Jennings, M. Kent and Ziegler, L. Harmon (Englewood Cliffs, NJ, 1966), 42–54; Fuchs, Lawrence, The Political Behavior of American Jews (Glencoe, 1966); and Glazer, Nathan and Moynihan, Daniel P., Beyond the Melting Pot (Cambridge, Mass., 1963). For a comparative analysis of the differential impact of ethnicity and religion on party politics in the United States and Canada, see Smith, Joel and Kornberg, Allan, “Some Considerations Bearing upon Comparative Research in Canada and the United States,” Sociology, III (1969), 341–57.

15 “Political Socialization and Leadership Selection,” Annals of the American Academy of Political and Social Science, CCCLXI (1965), 96–111.

21 Ambition and Politics: Political Careers in the United States (Chicago, 1965).

22 The questions from which the independent variables were derived as well as the manner in which the measures have been constructed are available to interested readers upon request.

24 In this regard, see the recent paper by Langton and Karns who found the greatest incidence of forgetting and misremembering occurred among the youngest age cohort in their sample populations. Thus, they point out “our findings reflect more closely the literature in experimental psychology rather than the stereotypic image of aging and memory loss.” Langton, Kenneth P. and Karns, David A., “Political Socialization and National Development: Some Hypotheses and Data,” a paper prepared for delivery at the convention of the American Political Science Associaion, Chicago, 1971, 19.

25 As is well known, the controversy generally has revolved around whether the issue analysis or reputational approach is the more appropriate method of delineating holders of power or influence. Obviously, there is some merit in the claims and charges of the partisans of both techniques. The basic lines of the controversy were drawn in Dahl, Robert A., “Critique of the Ruling Elite Model,” American Political Science Review, LII (1958), 463–9; Polsby, Nelson W., “The Sociology of Community Power: A Reassessment,” Social Forces, XXXVII (1959), 232–6; Wolfinger, Raymond E., “Reputation and Reality in the Study of ‘Community Power,’” American Sociological Review, XXV (1960), 636–44; William V. D'Antonio and Eugene C. Erickson, “The Reputational Technique as a Measure of Community Power: An Evaluation Based on Comparative and Longitudinal Studies,” Nelson W. Polsby, “Community Power: Some Reflections on the Recent Literature,” Raymond E. Wolfinger, “A Plea for a Decent Burial,” D'antonio, William V., Erlich, Howard S., and Erickson, Eugene C., “Further Notes on the Study of Community Power,” all in ibid., XXVII (1962), 362–76, 838–54; and Anton, Thomas J., “Power, Pluralism, and Local Politics,” Administrative Science Quarterly, VII (1963), 425–57.

26 Lasswell and Kaplan have defined co-archy as “a structure of equal power relationships,” Power and Society, 204–5.

27 The Lorenz curve and the Gini index (the Gini coefficient is an estimate of twice the area of inequality above the curve) are discussed by Alker, Hayward R. Jr., in his Mathematics and Politics (New York, 1965), 29–53. See also Alker, and Russett, Bruce M., “Indices for Comparing Inequality,” Comparing Nations, ed. Merritt, Richard L. and Rokkan, Stein (New Haven, 1966), 349–72.

29 A similar analysis was utilized to delineate the attributes of individuals within a community who offer the most nominations of community infiuentials in Smith, Joel and Hood, Thomas, “The Delineation of Community Power Structure by a Reputational Approach,” Sociological Inquiry, XXXVI (1966), 3–14. Even though we have chosen to utilize and report the results obtained by these regression procedures, it is quite possible that the results are distorted owing to the fact that the J-curve distributions of the dependent variables failed to meet the requisites of the model. Our decision to report the regression results is based on a consideration of the results obtained from a multiple discriminant analysis performed on (a) the party samples trichotomized on a none, some (1 to 5 votes), many (6 or more) vote basis, and (b) the city-party samples dichotomized on a none-some basis. These analyses indicated that while the specific indexes that were significant sometimes varied, conclusions at the level of the six classes of variables listed in Table vii remained stable. Accordingly, the discussion which follows in the text will be worded with this fact in mind and no assertions are made that are not supported by all our methods. The particular variations imong specific indexes are not surprising owing to the facts that: (a) the variances in the dependent variables were altered in the conversion of variables to attributes; (b) the independent variables could not all be included in the same multiple discriminant analyses but had to be rotated because the frequencies of cases in the “some” and “many” categories did not permit simultaneous treatment of all twenty-four as did the regression approach; and (c) the regression and multiple discriminant techniques treat the assignment of interaction effects differently. In short, we were forced to attempt a solution to our problem by triangulation rather than by a direct approach. Although we have decided to proceed by reporting the regression results, results of the multiple discriminant analyses are available on request.

30 Only those variables that achieved an “F” value significant at the .05 level are permitted to enter and to remain in the equation.

33 Included in this group are both the non-holders of high position recommended to us initially by our expert key informants and the seven individuals who were interviewed as a consequence of being cited by already interviewed colleagues on the initial list (see n. 11).

* The research of which this paper is a part is supported by grants from the Canada Council, the National Science Foundation, and the Center for the Study of Aging and Human Development of Duke University. We are grateful to Mildred Schwartz for her critical reading of and helpful comments on an earlier draft of this paper.