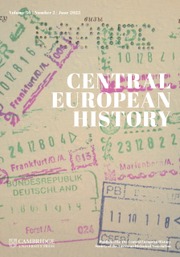 In May 1951, the Hamburger Freie Presse published an article on the alleged experiences of Hans Schmidt, an East German police officer (Volkspolizist) who had sought to register earlier that year for political asylum in West Berlin. The newspaper profile followed the twenty-one-year-old Schmidt from his unit's barracks in the northern city of Rostock, across the still undefended border between Brandenburg and West Berlin, to a police station in the northwestern district of Spandau, where he announced his intention to flee to West Germany.

1 G. Müller, “Volkspolizist Schmidt sucht die Freiheit, aber die Freiheit schickt ihn wieder zurück,” Hamburger Freie Presse, May 19/20, 1951; Landesarchiv Berlin (LAB) B Rep 008 Nr. 189, “Flüchtlingsstelle to Presseamt,” June 4, 1951. Newspaper accounts such as this one are among the few sources available on the experiences of individual refugees as they made their way through the reception system. Administrative files in both West Germany and West Berlin regarding individual asylum applications and decisions, including the records of West Berlin's refugee commissions, are not typically available in the archives; the Lower Saxony State Archives in Hanover, which contain some files pertaining to the refugees registered at the reception center in Uelzen, are a notable exception in this regard. In addition, refugees' own contemporary accounts and later memoirs generally focus far more on their preflight lives as a means of justifying their decision to flee, as well as on the experience of actually crossing the border. Their arrivals at reception centers are rarely documented.

2 In West Germany, at least (a specific breakdown for West Berlin is not available), around one-third of these new arrivals were refugees twice over, having been expelled from the former German territories in the East and having settled first in the Soviet Zone. These expellee-refugees were often better off once they arrived in West Germany, where they could count on the support of politically well-connected expellee organizations and the federal equalization-of-burden laws. Those who were natives of the area that would become the Soviet Zone/East Germany were not as fortunate. See LAB B Rep 008 Nr. 105, “Rechtsstellung von Zuwanderern aus der Sowjetzone,” March 9, 1954; Bundesarchiv Koblenz (BAK) B 137/197, “Der Flüchtlingsausweis ‘C,’” Unser Kampf—Unsere Arbeit. Mitteilungsblatt der VPO, Nov. 1953; Walter von Keudell, “Der Weg der Enttäuschten. Die Versorgung der Sowjetzonen-Flüchtlinge in der Bundesrepublik,” Berlin-Brandenburger Kurier, Nov. 2, 1953, reprinted in Die Welt, Nov. 26, 1953.

6 In 1956, Heinrich Kreil, the Senator for Labor and Social Questions in Berlin, wrote: “On the day of reunification the reflux of the people who once fled from the Soviet Zone of Germany will set in. Let us hope that . . . the Berlin refugee camps will no longer be crowded with people looking for asylum . . . but with re-immigrants who are anxious to reestablish within a few years in their homeland (Heimat) a free and happy life.” See Heinrich Kreil, “Berlin and the Refugees from the Soviet Occupied Zone of Germany,” in “Flüchtlingsprobleme in Berlin,” special edition of Integration (Munich and Augsburg: Hofmann-Druck und Verlag, 1956).

18 BAK B 137/203, letter from Kalweit to Kaiser, Nov. 7, 1950. The VOS was apparently comprised of refugees who had previously been imprisoned in the SBZ or GDR for political organizing. For more on the VOS, see Liang, Hsi-Huey, Berlin before the Wall (New York: Routledge, 1990), 57Google Scholar.

27 Even during subsequent years, West Berlin's statisticians never cited a specific number of refugees who had arrived prior to January 1949, suggesting that such records were not kept. See, e.g., Senator für Sozialwesen, “Die Flüchtlingsbewegung nach Westberlin.” There is a 1952 reference to the registration of 1,189 individuals (652 men, 242 women, and 295 children) prior to January 1949, of whom 149 were recognized as political refugees. It is not clear who decided on the question of recognition or non-recognition, however, what happened to these individuals, or how their arrivals were otherwise registered. See Berliner Schicksal 1945–1952, 163.

30 The files of the Department of Social Affairs and the Department of the Interior do not provide specific statistics for 1949 beyond a general estimate of new arrivals; see LAB B Rep 004 Nr. 39, Jahresbericht 1952, Senator für Sozialwesen.

42 National Archives and Records Administration (NARA, College Park, MD), Records of the U.S. Representative to the Combined Travel Board, Office of the U.S. High Commissioner for Germany, RG 466, speech by Jean J. Chenard, Director-General (U.S.) of the Combined Travel Board, before a Meeting of Reserve Officers in Germany, 1952. To my knowledge, there are no extant copies of this “blacklist,” though they may remain classified in an archive somewhere.

60 Donner, Report from Berlin, 47. Despite this plan, parts of the Marienfelde complex continued to receive German refugees (mainly from the Soviet Union and Russia) well into the 1990s.