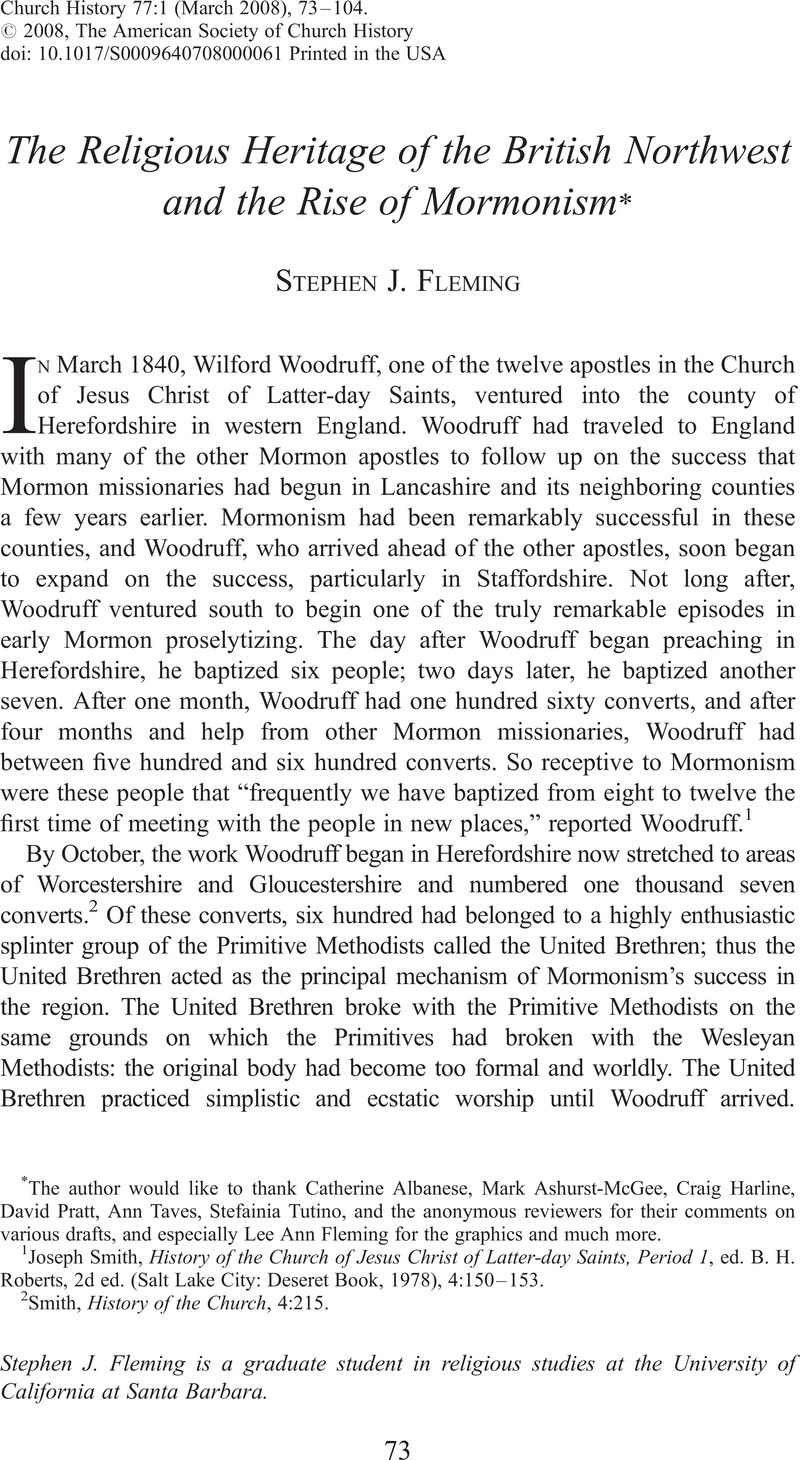 5 See Stephen J. Fleming, “ ‘Congenial to Nearly Every Shade of Radicalism’: The Delaware Valley and the Success of Early Mormonism,” Religion and American Culture 17:2 (Summer 2007): 130–31. For instance, E. P. Thompson fit Mormonism into his broader argument of the “reflex of despair” with the quote from an early Mormon missionary that his converts were “extremely poor, most of them having not a change of clothes to be baptized in”: E. P. Thompson, The Making of the English Working Class (New York: Pantheon, 1964), 802. Thompson pulled this quote from a book by W. H. G. Armytage but neglected to mention Armytage's other quotation from a Liverpool newspaper saying that the emigrating Mormons “are in appearance and worldly circumstances above the ordinary men of steerage passengers”: W. H. G. Armytage, Heavens Below: Utopian Experiments in England, 1560–1960 (Toronto: University of Toronto Press, 1961), 261–62.

6 P. A. M. Taylor, Expectations Westward: The Mormons and the Emigration of their British Converts in the Nineteenth Century (Edinburgh and London: Oliver Boyd, 1965), 150–51; Malcolm Thorp, “The Field is White Already to Harvest,” in James B. Allen, et al., Men with a Mission: The Quorum of the Twelve in the British Isles 1837–1841 (Salt Lake City: Deseret Book, 1992), 338. Compare to the numbers in Michael R. Watts, The Dissenters, 2 vols. (Oxford: Clarendon, 1978–1995), 2:310–11, 741. This comparison lacks precision because Thorp and Taylor did not use the same classification as Watts. Furthermore, Taylor's and Thorp's data included a sizeable portion in the “miscellaneous” designation, adding further ambiguity to the comparison. The Mormons did seem to have fewer middle-class converts compared with the rest of society, but they also had fewer of the lowest class, unskilled labor. Thus the Mormons seem to have clustered near the median of the society. I found similar results among the Mormon converts in the Delaware Valley without a Quaker ancestry (the lapsed Quakers who joined the Mormons in the area were quite wealthy): Fleming, “The Delaware Valley and the Success of Early Mormonism,” 145–146.

7 Nearly fifty Mormon households were compared with the wealth of those living in the same townships: Fleming, “The Delaware Valley and the Success of Early Mormonism,” 132–36.

11 Michael Watts found similar rates among the Primitive Methodists, suggesting that such movements were generally most successful among those with a religious upbringing: Watts, Dissenters, 2:52.

12 I have called into question the reliability of mass examination of journals for determining gender ratios among the early converts. Marvin Hill assumed that because Mormon journals and autobiographies were written overwhelmingly by men, early Mormonism was an overwhelmingly male movement: Marvin Hill, “Early Mormonism in the Burned-over District,” 427. My questioning of such evidence is in Stephen Fleming, “The Study of Early Mormonism on the Periphery,” paper given at the Mormon Historical Association Meeting, 24 May 2003, Provo, Utah. My testing of this theory in the Delaware Valley, where branch records are available to allow for testing of the actual gender ratios, found that although 13 out of 17 journals and autobiographies, or 76 percent, were written by men, the branch records show that 449 out of 813 members, or 55 percent, were female. Such data call into question the reliability of using journals to provide representative data for early Mormon converts as a whole. However, other data can be used to indicate whether the data on church adherence are roughly valid or not. While no early sources corroborate the notion that men joined at rates much higher than women, many sources note that an unusually high number of Methodists joined the Mormons. For instance, a New Jersey newspaper reported that “the [Mormon] excitement carried off quite a number from the Methodist Church”: Daily State Gazette (Trenton, N.J.), 7 May 1870. In Britain, an alarmed letter to the editor declared that “the members of our society (Methodists) seem to be the most conspicuous in sanctioning and promoting this vile and abominable doctrine”: Smith, History of the Church, 4:235.

13 The rates for the American Mormons come by combining Yorgason's study with Backman and Grandstaff's study. The American churched rate is for the year 1835 (the most representative date for the converts in the above studies) and is an estimate based on the rates in Roger Finke and Rodney Stark, The Churching of America, 1776–1990: Winners and Losers in Our Religious Economy, 2d ed. (New Brunswick: Rutgers University Press, 2005), 31, 56. Finke and Stark list the churched rate in 1776 at 17 percent and at 34 percent in 1850. If rates increased at a constant rate between those two dates, it would have been roughly 30 percent in 1835. The same method was used for the Methodist rate. British churched and Methodist rates are based on the 1851 census tabulated by Michael Watts in Dissenters, 2:27–29.

20 Kent, Wesley and the Wesleyans, 95, 97, 109, 116, 123, 203. Wesley, though he witnessed many such experiences in others, never had one himself. Wesley once went so far as to lament, “I never had any other proof of the eternal or invisible world than I have now; and that is none at all, unless such as fairly shines from reason's glimmering ray”: quoted in Kent, Wesley and the Wesleyans, 192. Furthermore, Wesley was cautious that his followers not go too far in their supernatural quests, warning his flock to “beware of enthusiasm. Such is the imagining you have the gift of prophesying, or discerning spirits, which I do not believe one of you has; no, nor ever had yet”: John Wesley, A Plain Account of Christian Perfection, in The Works of John Wesley, 10 vols. (New York: Harper, 1827), 8:55.

21 John Wigger, Taking Heaven by Storm: Methodism and the Rise of Popular Christianity in America (Urbana: University of Illinois Press, 2001 [1998]), 110.

30 Richard Lyman Bushman, Joseph Smith: Rough Stone Rolling (New York: Knopf, 2005), 23–27, 50. The Smiths fit John Kent's description of those who “lived in subcultures of their own, in which they satisfied their primary religious needs, either by manipulating Christian institutions, or by inventing religious forms of their own”: Kent, Wesley and the Wesleyans, 184.

37 Numbers from 1835 are based on those in the previous chart; 1805 are numbers based on the calculations using Finke and Stark's churched and Methodist rates for the years 1776 and 1850: Finke and Stark, The Churching of America, 31, 56.

58 Cowing, Saving Remnant, 43–54; Rust, Radical Origins, 30. Eighty percent of Rowley's original inhabitants came from the Northwest, particularly Yorkshire. Cowing argues that Rowley exhibited Northwestern tendencies by being the last town in the Massachusetts Bay Colony to accept the Halfway Covenant, and later by embracing the New Light of the Great Awakening: Cowing, 44–47.

66 Dorothy Sylvester, The Rural Landscape of the Welsh Borderland: A Study in Historical Geography (London: Macmillan, 1969), 166–189.

92 For instance, George Lavington, Enthusiasm of Methodists and Papists Compared (1749).

99 Butler admits that “the laity of early modern Europe often saw little difference between the supernaturalism invoked through magic and that pursued by the churches,” but Butler still used the clergy's classification despite his intent of exploring “popular religion”: Butler, Awash in a Sea of Faith, 22. Butler refers to the occult as “quasi-Christian or non-Christian” and “quasi-pagan”: Butler, Awash in a Sea of Faith, 2, 4.

100 Michael F. Snape, The Church of England in Industrialising Society: The Lancashire Parish of Whalley in the Eighteenth Century (Woodbridge, U.K.: Boydell, 2003), 71.

123 This was the case of the Strict Congregationalists: Goen, Revivalism and Separatism in New England, 200–3.

131 Quoted in Alexander L. Baugh, “‘For this Ordinance Belongeth to My House’: The Practice of Baptism for the Dead outside the Nauvoo Temple,” Mormon Historical Studies 3:1 (Spring 2002): 47, emphasis in original.