Extreme weather events, especially flooding, have been on the increase worldwide. Reference Alderman, Turner and Tong1 In October 2019, Typhoon Hagibis struck Japan. Excessive rainfall resulted in levees being breached in 128 sections of 71 rivers throughout the country, with approximately 100 people losing their lives, mostly through drowning.

A 46-year-old male presented to our hospital in Iwaki City, Fukushima, with swelling and redness in his right foot (Figure 1a) 3 days after Typhoon Hagibis struck Fukushima. His home was not located in a flood-prone area, but the typhoon caused a lot of water, vegetation, and rubble to accumulate around his house. On examination during the initial presentation, he had a wound, which he reported was a result of a metal nail on his right foot (see Figure 1b). The injury had been caused by contact with a strut sticking out from an old fence block (see Figure 1c). He was wearing running shoes when the injury occurred (see Figure 1d). He attended an emergency room at another hospital immediately after being injured. He was unable to recall whether he had previously received a tetanus vaccination, and the attending physician washed the wound with water, prescribed cefaclor, but did not administer a tetanus vaccination. During 2 days of antibiotic treatment, the patient’s injured foot gradually became swollen and red, which led him to visit our hospital. 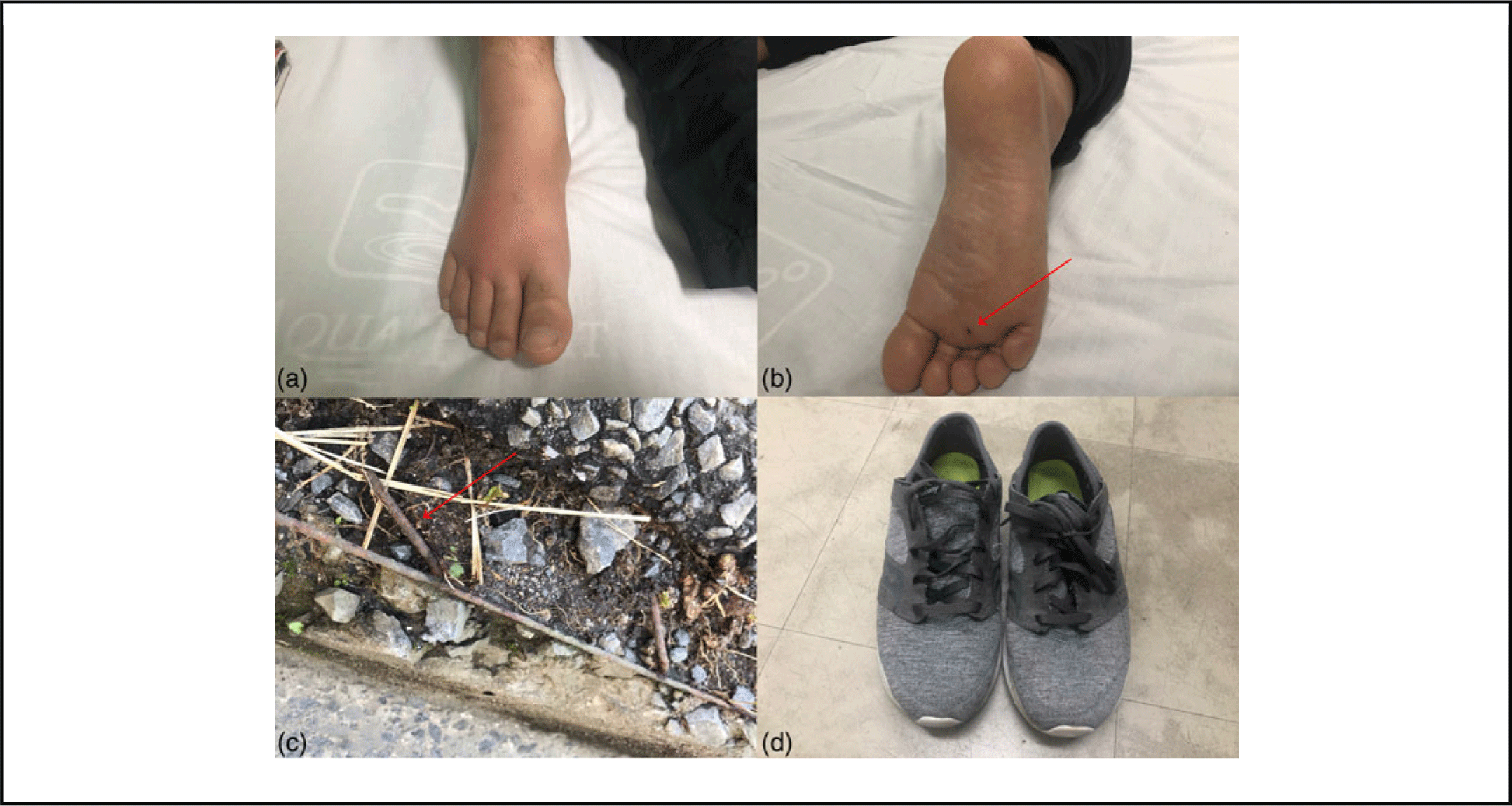 He was admitted for cellulitis in his injured foot, and intravenous antibiotics (cefazolin 1 g per 8 hours) and a tetanus vaccination and human anti-tetanus immunoglobulin were administered the same day. The foot X-ray did not show apparent signs of osteomyelitis. Because the patient’s infection was limited to the wound and its surrounding area when he initially consulted our department, and the patient had already begun a course of antibiotics, we judged that his condition did not necessitate microbial culture examination of the wound. His injury responded to treatment, and he was discharged on the sixth day after admission.

This case highlights the importance of using proper clothing and equipment when clearing up after natural disasters. Reference Alderman, Turner and Tong1,Reference Morita, Tsubokura and Tanimoto2 Wounds from exposed nails and other sharp objects or surfaces can be difficult to cleanse and can easily become infected. This case emphasizes that the use of appropriate protective footwear and clothing can prevent accidents, potentially injury and subsequent infections.

It is notable that the patient failed to receive a tetanus vaccination during his visit for emergency medical help. Tetanus is an acute, vaccine-preventable infectious disease, arising through infection with spores of Clostridium tetani, a common soil-dwelling bacterium, with the infection frequently occurring in minor and/or clean wounds. 3 The incidence of tetanus is low in resource-rich settings. Reference Sexton4 Nevertheless, more than 2000 cases were observed in the United States in 2016, Reference Liang, Tiwari and Moro5 and approximately 100 cases of tetanus occur annually in Japan. 3 Consequently, its risk should not be underestimated. Although the survival rate from the disease is now more than 90%, tetanus cases are known to increase after natural disasters. It has been suggested that tetanus vaccination should routinely be given to patients with wounds in cases where they cannot recall whether their tetanus vaccinations are complete and up to date. Reference Hibberd, Weller and Sullivan6

In Japan, a 1968 law requires universal vaccination against diphtheria, pertussis, and tetanus. The primary infant course of 3 injections provides good protection for a number of years, whereas the fourth and fifth booster doses give lifelong protection. Individuals should be aware of their vaccination status, particularly when they engage in activity that puts them at risk of infection. Reference Morita, Tsubokura and Tanimoto2 However, because it is not always possible to do so, particularly in the immediate aftermath of disasters, health workers should be aware of the importance of administering a tetanus vaccination as soon as possible.

We believe that this case has additional important implications, given the local context of Fukushima Prefecture. During Typhoon Hagibis, Fukushima Prefecture was particularly badly hit, the prefecture having previously experienced the 2011 triple disaster (major earthquake, tsunami, and nuclear accident). Reference Morita, Nomura and Furutani7 Given that Japan did not provide universal tetanus vaccination before 1968, Reference Nakano8 those born earlier – that is, age 52 years and above at the end of 2019 – have a relatively high risk of tetanus infection. According to a report published in February, the number of Fukushima residents age 55 years and above was 831 914, accounting for 45.3% of the total population. Given these facts, a limited proportion of Fukushima’s elderly population is assumed to have a protective level of anti-tetanus antibody, Reference McQuillan, Kruszon-Moran and Deforest9 and thus the importance of routine tetanus vaccination or boosters cannot be overemphasized. However, given that there are other critical health issues in post-disaster Fukushima, Reference Ozaki, Nomura and Leppold10,Reference Nomura, Blangiardo and Tsubokura11 it is important for all relevant stakeholders to determine an appropriate, cost-effective health intervention policy suitable for meeting the needs prevailing at present.

The Jyoban Hospital of Tokiwa Foundation Institutional Review Board waived review because this is a case report. Prior informed consent was obtained from the patient concerned for publication of the case study.

AO wrote the manuscript. All authors conceptualized and designed the study and revised the paper.

AO reports receiving a personal fee from MNES Inc. outside the scope of the submitted work.

We express our gratitude to Professor Andy Crump for his constructive opinion on this study and for assistance in preparing the manuscript for publication. 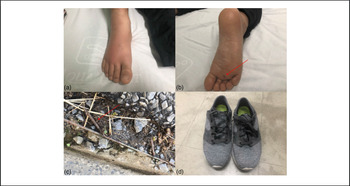