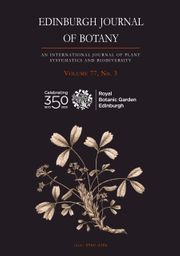 REVISION OF GREWIA (MALVACEAE–GREWIOIDEAE) IN PENINSULAR MALAYSIA AND BORNEO

Two keys to distinguish the genera Grewia and Microcos are presented, one based on macromorphological characters and the other on micromorphological characters. Grewia is revised for Peninsular Malaysia and Borneo. Despite the 33 names published under Grewia for the region only four species are recognized here. Grewia multiflora is newly recorded from Borneo and attention is drawn to its curious distribution; G. huluperakensis is endemic to Peninsular Malaysia; G. polygama is found in limestone forest in northern Peninsular Malaysia, and G. laevigata is common in Peninsular Malaysia and Borneo. A key, descriptions and illustrations are provided for all four species. A list of excluded species names is included: all are referable to Microcos.

REVISION OF GREWIA (MALVACEAE–GREWIOIDEAE) IN PENINSULAR MALAYSIA AND BORNEO
×

REVISION OF GREWIA (MALVACEAE–GREWIOIDEAE) IN PENINSULAR MALAYSIA AND BORNEO
×

REVISION OF GREWIA (MALVACEAE–GREWIOIDEAE) IN PENINSULAR MALAYSIA AND BORNEO
×
×