A cross-sectional study was performed among 2494 adults not living or working on a farm to assess prevalence of Clostridium difficile (CD) colonization and risk factors in a livestock dense area. CD prevalence was 1·2%. Twenty-one persons were colonized with a toxigenic strain and nine with a non-toxigenic strain. CD-positive persons did not live closer to livestock farms than individuals negative for CD. Antibiotic exposure in the preceding 3 months was a risk factor for CD colonization (odds ratio 3·70; 95% confidence interval 1·25–10·95).

Clostridium difficile infection (CDI) is an enteric disease that is mainly hospital-associated, but also increasing in the community [Reference Hensgens1, Reference Lessa2]. In the Netherlands, in about one-quarter of all diagnosed patients CDI is acquired in the community [Reference Hensgens3]. Over the past decade, a new strain, C. difficile (CD) ribotype 078, has emerged in patients with CDI especially acquired outside the hospital, but has also been found in high numbers in piglets, veal calves, and their immediate environment [Reference Hensgens3, Reference Keel4]. To explain the emergence of community-acquired CDI, the following transmission routes have been suggested: environment-to-person, contact with infected or colonized individuals or animals, and foodborne transmission [Reference Otten5]. A previous study demonstrated that 25% (12/48) of farmers who had daily contact with pigs tested positive for CD, and ribotype 078 was found on 15 of 32 pig farms in both humans and pigs suggesting animal-to-human transmission [Reference Keessen, Harmanus and Dohmen6]. Highest rates were found in pig-breeding farms in piglets, 1–7 days old [Reference Keessen, Harmanus and Dohmen6]. Data on the prevalence of CD in the Dutch general population (i.e. persons not living or working on farms), however, are scarce. In the Netherlands, the locations of pig farms and the area with high occurrence of human CD ribotype 078 infections overlap and CD can be detected in the immediate environment of farms [Reference Goorhuis7], but a direct association between exposure to pigs and high occurrence has not been observed. Our study objective was to assess the prevalence of and risk factors for CD colonization in persons not living or working on a farm in areas with high livestock densities.

This cross-sectional study was part of a larger population-based study on health of residents living in a highly populated rural area with a high density of livestock farms in the Netherlands: the Livestock Farming and Neighbouring Residents’ Health study (Dutch acronym: VGO). The methodology of the VGO study is described in detail by Borlée et al. [Reference Borlée8]. In 2012, a questionnaire survey was conducted among the general population recruited via general practitioners [Reference Borlée9]. Participants were included if they were aged 18–70 years, living in the province of Noord-Brabant or Limburg, and living in municipalities with <30 000 inhabitants. One eligible participant per household was invited. Questionnaire participants who gave consent for contact for a follow-up study, and who were not working or living on livestock farms, were eligible to participate in our cross-sectional population-based study, which was conducted from March 2014 to February 2015. Fecal samples to determine CD colonization (with or without symptoms) were taken once and participants were asked to complete a questionnaire to study risk factors. The distance between participants’ residential address and the nearest farm was calculated [Reference Smit10]. The electronic medical records maintained by general practitioners were used to collect data on comorbidity and exposure to antibiotics [Reference Prins and Verheij11].

Data were analyzed using SPSS version 22.0 (SPSS Inc., Chicago, IL). The Mann–Whitney U-test was used to compare the median distance to farms, the median number of farms within 500 and 1000 m, and the median number of farm animals within 1000 m. Using univariate logistic regression, odds ratios (ORs) with 95% confidence intervals (CIs) were obtained for risk factors. The VGO study was approved by the medical ethical committee of the University Medical Center Utrecht (number 13/533); all participants signed informed consent.

Descriptive analyses of the questionnaire data demonstrated that 45% of CD positives had gastroenteritis in the month preceding the study, compared with 20% of negatives (P < 0·01). When including only the toxin-producing CD positives, this difference was respectively 50% vs. 20% (P < 0·01). The frequency of nausea, diarrhea and fever was not significantly different between CD positives compared with negatives (14 vs. 9%, 24 vs. 17%, and 10 vs. 4%, respectively).

Table 1. Risk factors for Clostridium difficile (CD) among adults living near livestock farms in the Netherlands 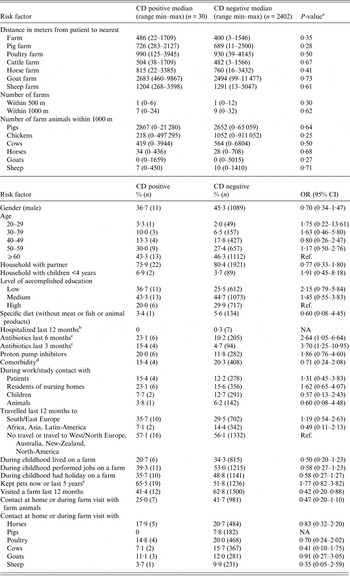 b Hospitalized in the Netherlands and/or abroad.

c For 415 persons data on antibiotics and comorbidity was missing.

To our knowledge, this is the first study on the prevalence of CD colonization among persons not living or working on farms in areas with a high density of livestock farms. There is limited information on the prevalence of CD in general healthy populations, since most of the studies focused on patients in healthcare facilities [Reference Furuya-Kanamori14]. The prevalence of 1·2% in our study is considerably lower than the 4·7% that was reported among patients at time of admission to three different hospitals in the Netherlands [Reference Terveer15]. However, the investigated groups differed considerable with higher age and more comorbidity in the latter study. Including persons living or working on farms, would probably also have resulted in a higher CD prevalence.

The most frequently found toxigenic PCR ribotypes in our study were ribotypes 014 (n = 7; 23·3%) and 078 (n = 4; 13·3%). Those PCR ribotypes, together with 020, are also the most frequently isolated types in the Netherlands amongst hospitalized patients with CDI [Reference Crobach16]. Ribotype 078 has been found in pigs and humans who have direct contact with pigs (i.e. pig farmers) [Reference Keessen, Harmanus and Dohmen6]. No association was observed between CD colonization and living near (pig) farms, suggesting that there is no significant transmission from the environment around farms to humans. However, it should be noted that farmers were excluded from this study. A limitation of our study is the lack of information on the presence of CD at the farms in the study area, since no microbiological investigations on the farms and their surroundings were performed. An ecological association between the occurrence of human CD type 078 and the location of pig farms in the Netherlands has been reported [Reference Goorhuis7]. Moreover, a previous study reported CD to be present in both humans and animals in about half of pig farms (15/32) [Reference Keessen, Harmanus and Dohmen6]. However, it is unknown whether there are trends in time and what this prevalence is in farms with other animal species than pigs. In our study, we found a significant negative association between CD and visiting farms, for which we have no explanation.