Published on behalf of European Association of Archaeologists
Journal Home 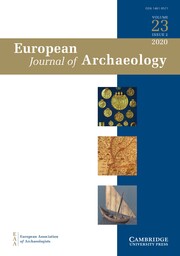