Did Lloyd George Starve the British Army of Men Prior to the German Offensive of 21 March 1918?* 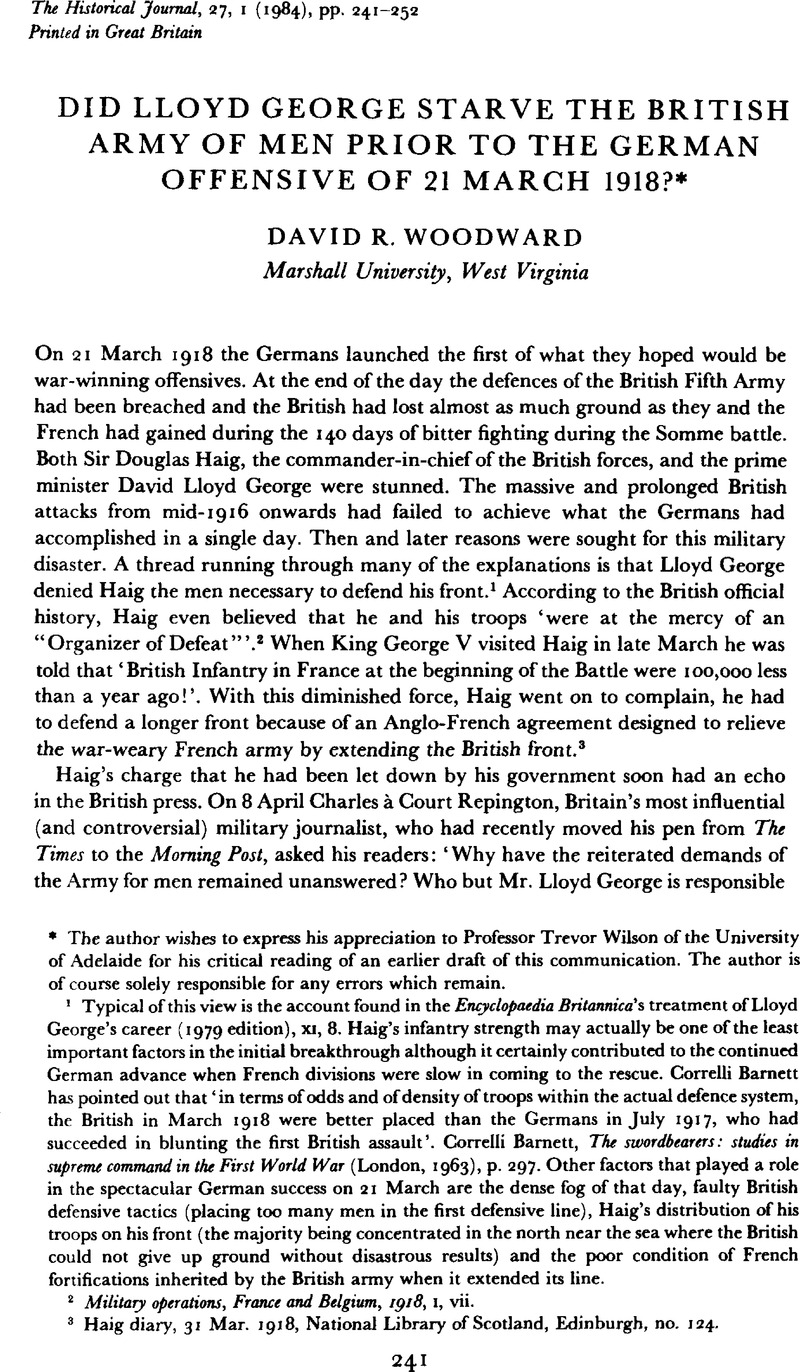 1 Typical of this view is the account found in the Encyclopaedia Britannica's treatment of George's, Lloyd career (1979 edition), xi, 8Google Scholar. Haig's infantry strength may actually be one of the least important factors in the initial breakthrough although it certainly contributed to the continued German advance when French divisions were slow in coming to the rescue. Correlli Barnett has pointed out that ‘in terms of odds and of density of troops within the actual defence system, the British in March 1918 were better placed than the Germans in July 1917, who had succeeded in blunting the first British assault’. Barnett, Correlli, The swordbearers: studies in supreme command in the First World War (London, 1963), p. 297Google Scholar. Other factors that played a role in the spectacular German success on 21 March are the dense fog of that day, faulty British defensive tactics (placing too many men in the first defensive line), Haig's distribution of his troops on his front (the majority being concentrated in the north near the sea where the British could not give up ground without disastrous results) and the poor condition of French fortifications inherited by the British army when it extended its line.

5 There can now be no doubt that Lloyd George misled parliament. A copy of the adjutant-general's revised returns is in the Lloyd George papers (F/235) in tne House of Lords Record Office, London, and Hankey admits in his diary that Lloyd George was aware of the corrected returns when he spoke to parliament. Hankey diary, 9 May 1918, Churchill College Archives, Cambridge, 1/3.

20 Much has been made about the fact that no member of the manpower committee had military experience (unless General Smuts is counted) and its alleged failure to call upon the general staff for advice. Lieutenant-General Sir George M. W. Macdonogh, the director of military intelligence, Maurice, General Sir C. F. Nevil Macready, the adjutant-general to the forces, and other military authorities (Robertson was not among them), however, were called before this committee to give evidence.

21 War cabinet (316 A), 7 Jan. 1917, CAB 23/13. When told by Lord Derby, the secretary of state for war, and Robertson how damaging his statement was to the War Office's efforts to pry more men out of the civilians, Haig reversed himself. But it was too late. The civilians had heard what they wanted to hear.

37 With the Admiralty unable to reject the possibility that the German navy might be able to transport a sizeable force to the British Isles, the military authorities took the threat of a German invasion very seriously. See Robertson, , ‘Troops required for Home Defence’, Cabinet paper G.T. 3212 of 3 01 1918, CAB 24/38Google Scholar.

39 The British official. History is contemptuous of the government's attempts to render ‘a larger proportion of the Army available for first-line duty’, arguing that since ‘the ancillary services had already been “combed” many times’ it was ‘not worth consideration’. Military operations, Appendices, Appendix 7. With all continental forces desperately short of good men during the winter of 1917–18, this elitist view was questionable to say the least. An important reason for the formation of the hand-picked storm trooper units for the 21 March offensive was the serious deterioration of the overall quality of the German army.

40 In July, Lloyd George told the war cabinet that four departments in addition to a French officer Colonel Roure, whom Lloyd George had invited to investigate Britain's utilization of manpower to mollify Clemenceau, had criticized the army's use of mobilized men. Roure, in fact, argued that from 200,000 to 300,000 more combatants could be combed from the men already in uniform. ‘We could not continue’, Lloyd George thundered, ‘taking men from industries and practically raising a mutiny in this country in the rural districts, and among the tribunals until we were convinced that the best use was being made of the men we had taken.’ Milner, who was now the secretary of state for war, admitted that France got a greater proportion of its soldiers into the front lines. But he rightly emphasized the difference between the organization of an army fighting on its own soil with ‘quiet’ sectors and one fighting in a foreign land withan active front. See Roure's report and Milner's response in Cabinet paper G.T. 5277 of no date, CAB 24/59, and Cabinet paper G.T. 5532 of 28 Aug. 1918, CAB 24/62. Also see war cabinet (449), 19 July 1918, CAB 23/7, and ‘X’ Committee (21), 16 July 1918, CAB 23/17.

* Views captured on Cambridge Core between September 2016 - 29th November 2020. This data will be updated every 24 hours.

Did Lloyd George Starve the British Army of Men Prior to the German Offensive of 21 March 1918?*
×

Did Lloyd George Starve the British Army of Men Prior to the German Offensive of 21 March 1918?*
×

Did Lloyd George Starve the British Army of Men Prior to the German Offensive of 21 March 1918?*
×
×