Cluster of Puerperal Fever in an Obstetric Ward: A Reminder of Ignaz Semmelweis 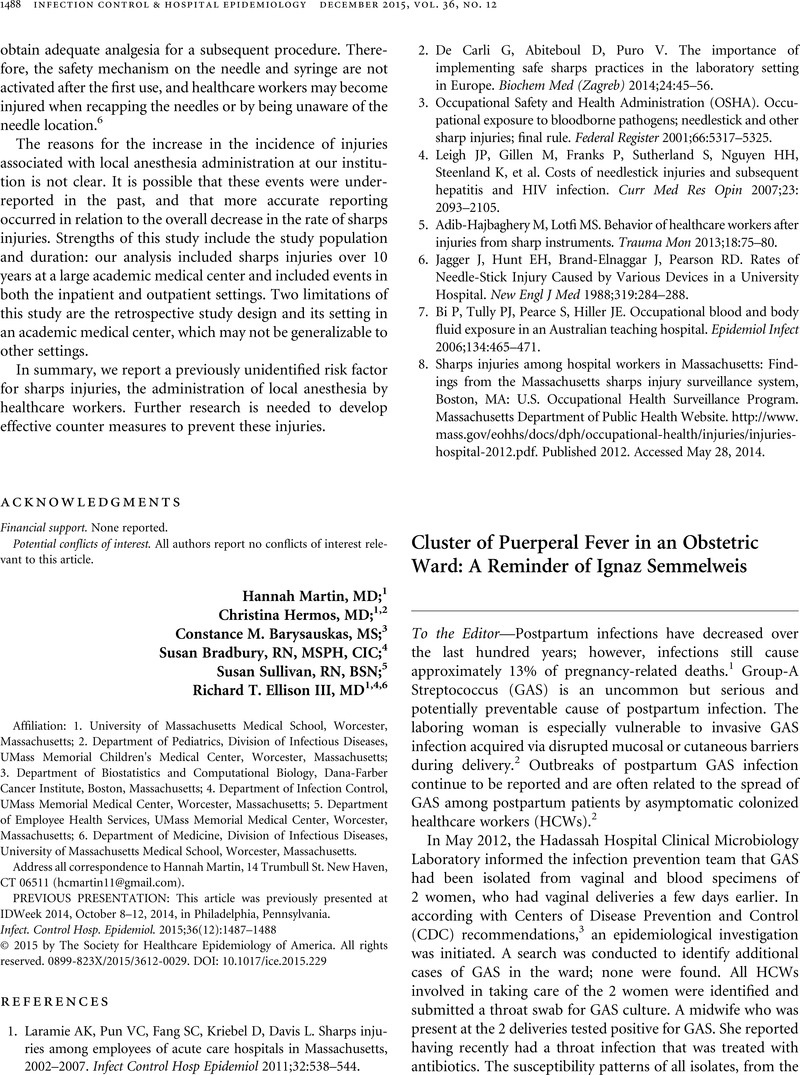 An abstract is not available for this content so a preview has been provided. To view the full text please use the links above to select your preferred format.
Type
Letters to the Editor
Information
Infection Control & Hospital Epidemiology , Volume 36 , Issue 12 , December 2015 , pp. 1488 - 1490
DOI: https://doi.org/10.1017/ice.2015.241[Opens in a new window]
Copyright
© 2015 by The Society for Healthcare Epidemiology of America. All rights reserved

To the Editor—Postpartum infections have decreased over the last hundred years; however, infections still cause approximately 13% of pregnancy-related deaths.Reference Cunningham, Leveno, Bloom, Spong, Hoffman and Dashe 1 Group-A Streptococcus (GAS) is an uncommon but serious and potentially preventable cause of postpartum infection. The laboring woman is especially vulnerable to invasive GAS infection acquired via disrupted mucosal or cutaneous barriers during delivery.Reference Chuang, Van Beneden, Beall and Schuchat 2 Outbreaks of postpartum GAS infection continue to be reported and are often related to the spread of GAS among postpartum patients by asymptomatic colonized healthcare workers (HCWs).Reference Chuang, Van Beneden, Beall and Schuchat 2

In May 2012, the Hadassah Hospital Clinical Microbiology Laboratory informed the infection prevention team that GAS had been isolated from vaginal and blood specimens of 2 women, who had vaginal deliveries a few days earlier. In according with Centers of Disease Prevention and Control (CDC) recommendations, 3 an epidemiological investigation was initiated. A search was conducted to identify additional cases of GAS in the ward; none were found. All HCWs involved in taking care of the 2 women were identified and submitted a throat swab for GAS culture. A midwife who was present at the 2 deliveries tested positive for GAS. She reported having recently had a throat infection that was treated with antibiotics. The susceptibility patterns of all isolates, from the 2 women and from the positive HCW, were identical and all had the same emm typing, emm 77. Pulsed-field gel electrophoresisReference Ribot, Fair and Gautom 4 showed that all specimens were molecularly identical (Figure 1). 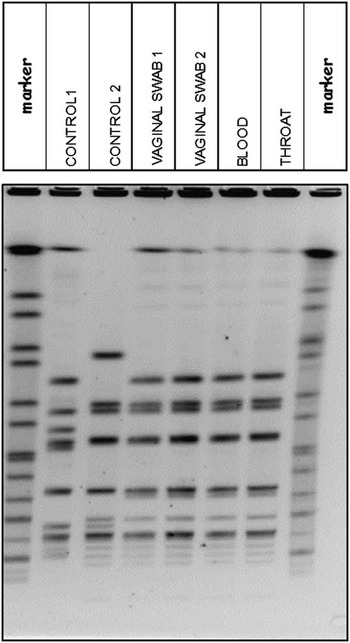 FIGURE 1 Pulsed-field gel electrophoresis of Group-A Streptococcus isolates from the 2 affected women (vagina 1, vagina 2, blood) and the midwife (throat) showing an identical PFGE pattern of all clinical isolates that is different from that of the controls (2 unrelated GAS isolates).

Both affected women were treated by intravenous penicillin G and recovered completely. The midwife was excused from patient contact for 24 hours while she began treatment with PO penicillin-V and rifampicin. She was instructed to work with a face mask until the end of the antibiotic course and a negative follow-up throat culture was obtained. No additional cases of post-partum GAS infection were reported in the department during the following 24 months.

Occasionally, GAS investigations lead to an HCW as the possible source for GAS transmission, but usually genetic analysis of the strains reveals different emm types and PFGE patterns. In the currently described cluster, all strains were genetically identical, thus proving transmission from the midwife to both patients during labor.

According to the CDC, approximately 232 cases of postpartum invasive GAS infection occurred in the United States in 1997, an incidence of 0.06 cases per 1,000 live births.Reference Chuang, Van Beneden, Beall and Schuchat 2 In a multistate, population-based evaluation during 2007–2009, postpartum women had a 30-fold increased incidence of GAS compared with non-pregnant women (0.59 vs 0.02 cases per 1,000 woman-years).Reference Deutscher, Lewis, Zell, Taylor, Van Beneden and Schrag 5 In a recent review of the literature of GAS infections in pregnancy or postpartum, 85% of invasive GAS infections occurred postpartum; most after vaginal delivery and within the first 4 days postpartum.Reference Hamilton, Stevens and Bryant 6

Because the rate of GAS vaginal colonization among asymptomatic pregnant women is low (1 per 3,472 deliveries in 1 studyReference Mead and Winn 7 ), questions have arisen regarding the mechanism of peripartum acquisition of the bacterium. Apparently, postpartum GAS infections in the modern era are a mixture of illnesses of endogenous (patient) origin and iatrogenic infections. GAS is a normal throat commensal with varying carriage rates among different populations. The bacterium can also colonize the hands, especially when there is a skin disease such as atopic dermatitis or skin fissures. A sick HCW and even to a certain extent an asymptomatic GAS carrier may transmit the bacterium to a woman during labor.

In the early 19th century, the mortality rate among women due to “childbed fever” in the “First Clinic” in Vienna was as high as 10%. In 1847, Dr. Ignaz Semmelweis instituted a policy of hand disinfection before entering the delivery room, and as a result the rate of death from childbed fever dropped dramatically. Only 20 year later, his innovation started to be valued and implemented. But even in the 21st century, while the importance of hand hygiene is well known, the average adherence to proper hand hygiene by healthcare workers is still <50%.

The hands are not the only source of GAS transmission during labor. An HCW who is infected with GAS or even just a carrier with flu-like symptoms may spread the bacterium by droplets. Despite the known risks of spreading infection to patients and colleagues, physician “presenteeism” (ie, the act of working while ill) is still a problem. According to a 2010 survey of 150 members of the American College of Physicians, more than half of resident physicians admitted to working through flu-like symptoms.Reference Jena, Meltzer, Press and Arora 8 In the 1930s, the spread of GAS by droplets was established as a possible source for transmission of GAS during delivery and in guidelines published at that time, strong recommendations were provided regarding the strict use of face masks for all HCWs present during delivery.Reference Watson 9 Although the 1996 WHO guidelines for infection control during delivery does not recommend the use of a face mask, 10 the specific concern of possible GAS transmission might justify reconsidering this issue.

To decrease to a minimum the possibility of infecting the laboring woman in the delivery room, we must adhere to the basic guidelines of infection prevention. Hand hygiene should be performed properly, and sick personnel with respiratory symptoms should stay at home or at least wear a face mask. Ignaz Semmelweis’s observation 150 years ago of the role of hand hygiene in the prevention of puerperal fever is still relevant today.

* Views captured on Cambridge Core between September 2016 - 26th February 2021. This data will be updated every 24 hours.

Cluster of Puerperal Fever in an Obstetric Ward: A Reminder of Ignaz Semmelweis
×

Cluster of Puerperal Fever in an Obstetric Ward: A Reminder of Ignaz Semmelweis
×

Cluster of Puerperal Fever in an Obstetric Ward: A Reminder of Ignaz Semmelweis
×
×