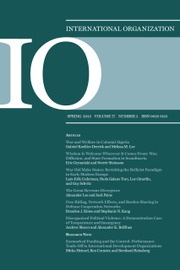 The nineteenth (1964–1965) session of the General Assembly was virtually deadlocked over the financial crisis, a crisis which arose as a result of disagreement between the Members about how the United Nations peacekeeping operations were to be financed. Three years earlier, in 1961, the General Assembly, having been informed of the substantial arrears in the payment of assessments, mainly for the United Nations Emergency Force (UNEF) and the United Nations Operation in the Congo (ONUC), adopted on December 20, a resolution asking the International Court of Justice to give an advisory opinion as to whether the expenditures authorized for the UNEF and ONUC operations constituted “expenses of the Organization” within the meaning of Article 17, paragraph 2, of the United Nations Charter. On December 19, 1962, the Assembly voted to accept the advisory opinion of the Court to the effect that the expenditures of these operations constituted “expenses of the Organization” within the meaning of Article 17 (2) of the Charter. However, attempts to extract the arrears from the defaulting states, the largest of which were the Union of Soviet Socialist Republics (Soviet Union) and France, on the strength of the Court's advisory opinion, largely failed; and the matter came to a head at the nineteenth session of the General Assembly when some Members, notably the United States, proposed that sanctions under Article 19 of the Charter be taken against the defaulting states. The crisis was finally averted toward the end of the nineteenth session when the United States decided not to pursue the question of sanctions.

5 For a fuller list of the suborgans, their abbreviations, and date of establishment see the Appendix at the end of the article.

6 Chapter VII of the Charter is entitled “Action with Respect to Threats to the Peace, Breaches of the Peace, and Acts of Aggression” and includes Articles 39–51.

7 This article also takes, to encourage further debate, a deliberately critical position toward the United Nations, particularly in the third section which discusses the nature of the audiority behind UN peacekeeping operations.

8 The Assembly did debate the question but took no action. After informal sounding of opinion the President of the Assembly then responded to the request of the government of the Republic of Vietnam (South Vietnam).

9 These figures, in fact, appear much less spectacular than those obtained by Hovet, Thomas Jr, in his study Bloc Politics in the United Nations (Cambridge, Mass: Harvard University Press, 1960)CrossRefGoogle Scholar. According to Hovet the Soviet Union between the years 1946 and 1958 was in agreement with UN collective security measures only 15.9 percent of the time; 68.4 percent of the time it was in opposition to such measures. The corresponding figures for the United States are 96 percent of the time in agreement and 1.9 percent of the time in opposition; for the majority of the Latin American states, 98.1 percent of the time in agreement and never in opposition. The difference between our figures and Hovet's may be explained by the fact mat whereas Hovet was concerned with all the resolutions on collective security measures, we have considered only those resolutions by which commissions were set up. Thus Hovet would have recorded a multiple of negative votes by the Soviet Union on, say, the Korean question whereas we record only three such votes against the creation of the diree commissions on Korea. Besides, during the 1946–1958 period which Hovet stuthed there were indeed more negative votes cast by the Soviet Union dian during the post-1958 period.

11 All classification is bound to be somewhat arbitrary. In the “western hemisphere” we have included, apart from the American continent, both Australia and New Zealand. The “Eastern European” group covers most of the Communist world, including (“neutralist”) Yugoslavia. The Republic of China (Nationalist China) is included in the Afro-Asian group.

For a tabular illustration of the discussion in this section see Tables 1–3 below.

aThis table is derived by examining the composition of all the UN peace suborgans listed in the Appendix at the end of this article. The table is a summary of the findings showing which of the caucusing groups were represented in the suborgans and which were not.

bFor an explanation of these terms denoting the various kinds of structures in which the suborgans were organized see pages 259–261 of the text.

cThese numbers represent the various suborgans which are referred to in the Appendix. Thus, I represents the Subcommittee on Spain, and 59 represents the UN Commission on Togoland under French Administration.

eThe only collegial-representative suborgan in which the western hemisphere was not represented was the 1960 Conciliation Commission for the Congo (66).

16 The ICJ, under Article 96 of the Charter, may be asked to give its “advisory opinion” on its interpretation of any part of the Charter; but on questions where Members are strongly divided for political reasons the Court's “opinion” is not likely to be accepted as definitive by all Members.

Often the basic criterion made by a small state for voting is the fear of antagonising the great power to which it is linked.…Of the evils that affect the United Nations, probably “satellitism” is one of those which has most delayed political maturity of the Organisation and contributed to damaging the moral superiority of its decisions.

21 See Claude, , International Conciliation, No. 547, pp. 21–47Google Scholar, for an analysis of the Guatemalan and Cuban crises and the conflict of jurisdiction between the UN and the OAS.

22 The support of the UN was necessary to “legitimize” United States action in Korea as much in the eyes of the American public as in those of the rest of the world.

23 This raises the very important question of precedent: If, say, the Soviet Union should implicitly recognize the validity of the resolution that set up UNEF, should it not be obliged to acknowledge as valid all future action under the Uniting for Peace Resolution? The Soviet answer is likely to be that its position on UNEF was not an act of recognition of the legal validity of the Uniting for Peace Resolution and that, in any case, it had abstained on, not voted for, the resolution that established UNEF. In reality it is difficult for states in their international relations always to act in strict consistency with their past actions, nor is it possible to compel them to do so. Precedent, as a source of developing law, has a very limited role in international affairs. For an opposite view, however, see Higgins, Rosalyn, The Development of International Law Through the Political Organs of the United Nations (London: Oxford University Press, 1963)Google Scholar.

24 In a very elaborate 569-page study called United Nations Forces: A Legal Study of United Nations Practice (London: Stevens & Sons, 1964)Google Scholar D. W. Bowett devotes three pages to the highly important and controversial subject of whether the Secretary-General has the legitimate authority to set up UN forces. He takes the view that the Secretary-General has a “clear” authority in this matter although with some limitations (pp. 299–301). We cannot agree with him; we take a more critical approach to the subject in the following pages.

33 If the circumstances were different, the Soviet Union might have argued in favor of wide powers for the Secretary-General and the United States in favor of cutting them down.

34 Thus, Hammarskjöld rationalized in the form of a rhetorical question:

Of course the political organs may always instruct him to discontinue the implementation of a resolution, but when they do not so instruct him and the resolution remains in effect, is the Secretary-General legally and morally free to take no action, particularly in a matter considered to affect international peace and security?

(Oxford Address, p. 24.) The answer expected by him is that the Secretary-General is indeed morally obliged to continue his operation in such a situation. A more correct answer should be that whether or not the Secretary-General should proceed with the operation will depend on the kind of diplomatic support he is able to secure (see footnote 37 below). It is possible that if the General Assembly or the Security Council finds itself, for one reason or another, unable to “discontinue the implementation of a resolution,” there may still be strong opposition among a combination of states as to make it diplomatically unwise for the Secretary-General to insist on its implementation.

36 A clear case in point is that of UNOGIL (1958). It is often cited as an example of the initiative taken by Hammarskjöld to extend the operation of a peace suborgan despite the failure of the Council to take action in the matter; in this case a Japanese resolution to extend UNOGIL had been vetoed by the Soviet Union. It is important to realize that the Secretary-General took the “initiative,” not despite the Council but after ascertaining by “advance soundings” that his intended action would be “acceptable to all.” (See Lash, Joseph, Dag Hammarskjold: Custodian of the Brushfire Peace [Garden City, N.Y: Doubleday, 1961], p. 119Google Scholar. The emphasis is by Lash.) Hammarskjold's initiative underlines his political acumen, not his “independence.”

37 Hammarskjöld sometimes gave the impression as if the Charter Purposes (Article 1) were a source of his authority. His invocation of Article 1 must, however, be interpreted as no more than attempts to buttress his position on controversial issues.

38 In his “Summary study of the experience derived from the establishment and operation of the Force” Hammarskjöld emphasized diat under the Charter and the Uniting for Peace Resolution “it must be regarded as excluded” that the Secretary-General could appeal for military personnel short of an explicit decision of the Council or the Assembly. (General Assembly Official Records … Annexes [13th session], Agenda item 65 [UN Document A/3943], P. 30.)

43 Ibid., p. 58. O'Brien tells of how the “Congo Club,” comprised of Dag Hammarskjöld and his advisers, deliberately kept the Soviets in the dark about happenings in the Congo, to the extent of not even allowing the Congo telegrams to fall into the hands of the UN officials from the Soviet Union on the grounds, presumably, that such information would be passed on to the Soviet government by the Russian members of the UN staff.

46 However, one useful purpose the distinction serves is to show that it is not enough for a UN operation to secure merely an “initial consensus” from the Member States, it must continue to receive support from the Members. The distinction is also important for a country which, having given its consent once, would like at a later stage to reconsider its position with regard to the operation.