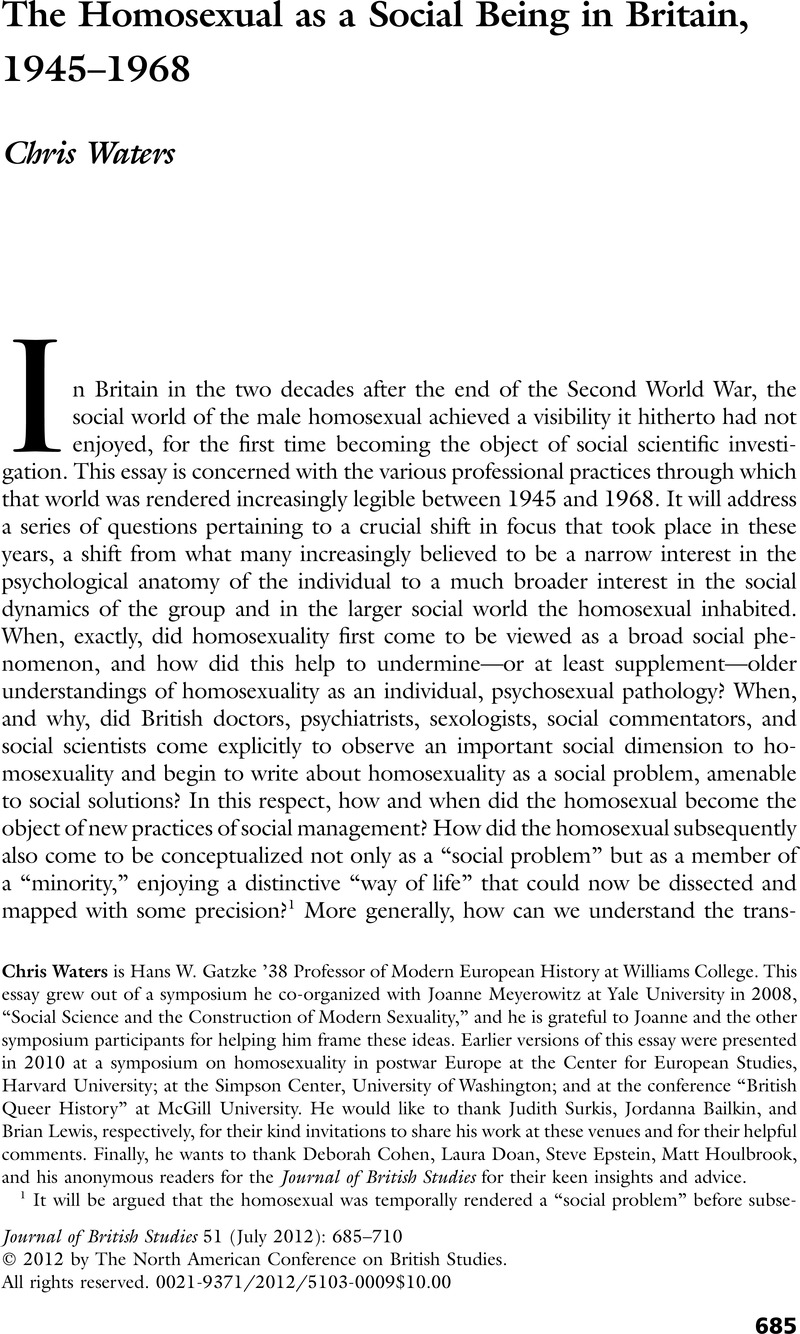 1 It will be argued that the homosexual was temporally rendered a “social problem” before subsequently being cast in more value-neutral terms as a member of a minority, enjoying a distinctive way of life, to borrow from the title of Peter Wildeblood’s study of “the underworld in our midst” (A Way of Life [London, 1956], quote on dust jacket).

2 Many questions addressed in this article are crystallized in Tom Ford’s 2009 film version of Christopher Isherwood’s 1962 novel, A Single Man (New York, 1978 [1964]). In the film there is a scene in which the protagonist, George Falconer, a university professor who has recently experienced the death of his same-sex partner, Jim, enjoys a drunken evening with his good friend, Charley. What is most striking about this scene is Charley’s wholesale inability to understand that George could have shared such a meaningful existence with another man; while she could accept him sympathetically as an individual homosexual, she remained unable to imagine him as part of a larger, social world, sharing a life with another man—indeed, with other men. It was, in short, George’s social world that remained off-limits and unintelligible to her, as it still was to many outsiders in the early 1960s on both sides of the Atlantic. This particular scene is played out rather differently in the novel (23–24). There it is George’s neighbors, the Strunks, who fear “the unspeakable that insists, despite all their shushing, on speaking its name.” There it is Mrs. Strunk, in particular, who, armed with “her psychology book,” sympathetically appreciates George, albeit merely as a solitary individual, a case of “arrested development,” a “misfit, debarred forever from the best things of life, to be pitied, not blamed.” Her own narrow understanding of George’s psychological selfhood would have been shared widely at the time in a society that understood homosexuality primarily as a psychological aberration and not as a social fact.

3 Good histories of sociological practice in Britain are still surprisingly rare, but see the essays in Bulmer, Martin, ed., Essays on the History of British Sociological Research (Cambridge, 1985)CrossRefGoogle Scholar, and especially in the context of this article, the first chapter, “The Development of Sociology and of Empirical Social Research in Britain.”

4 Savage, Mike, Identities and Social Change in Britain since 1940: The Politics of Method (Oxford, 2010), viiCrossRefGoogle Scholar. Savage focuses on the broad practices of social observation in general, as does this article, rather than more narrowly on the formal discipline of sociology.

5 Halsey, A. H., A History of Sociology in Britain: Science, Literature and Society (Oxford, 2004), viCrossRefGoogle Scholar.

7 Upchurch, Charles, “Forgetting the Unthinkable: Cross-Dressers and British Society in the Case of the Queen vs. Boulton and Others,” Gender and History 12, no. 1 (April 2000): 127–57CrossRefGoogle Scholar.

9 Croft, Taylor, The Cloven Hoof: A Study in Contemporary London Vices (London, 1932), 12Google Scholar. Croft, Taylor was an interwar pen name of the novelist and travel writer Rupert Croft-Cooke (1903–79), himself arrested on charges of gross indecency in 1952, about which he wrote in The Verdict of You All (London, 1955)Google Scholar. The full title of Iwan Bloch’s book is The Sexual Life of Our Time in Its Relations to Modern Civilization; it was first published in 1906 and was translated into English in 1908 (New York: Allied). My thanks to Matt Houlbrook for this reference; there is no better champion of the importance of the interwar years than he.

10 Sagarin, Edward, “Sex Research and Sociology: Retrospective and Prospective,” in Studies in the Sociology of Sex, ed. Henslin, J. M. (New York, 1971), 377–408Google Scholar. For more recent histories of sociological investigations of sexuality, some of which dispute Sagarin’s claims and map a much more dynamic set of investigative practices in the United States, see the articles in “Sex and Sociology: Sociological Studies of Sexuality, 1910–1978,” a special issue of Qualitative Sociology 26, no. 4 (December 2003): 429–555. Writing under the pseudonym Cory, Donald Webster, Sagarin had himself published a hugely important work that in part offered a pioneering study of the social dimensions of homosexuality, The Homosexual in America: A Subjective Approach (New York, 1951)Google Scholar. See below for Cory’s work in Britain.

14 “Anomaly” [Baldwin, Harry], The Invert and His Social Adjustment (London, 1927)Google Scholar. The book was reprinted with a sequel in 1948.

16 Dyer, Richard, “Coming Out as Going In: The Image of the Homosexual as a Sad Young Man,” in his The Matter of Images: Essays on Representation (London, 1993), 73–92Google Scholar.

26 This was the general understanding of the term in the essays collected in Social Problems in Wales, ed. United School of Social Service for Wales (London, 1913).

30 Burgess, Ernest W., “The Aims of the Society for the Study of Social Problems,” Social Problems 1, no. 1 (June 1953): 2–3CrossRefGoogle Scholar. The journal would publish a number of crucial studies of homosexual social life in the 1950s and 1960s, including, as described further in note 100 below, the British sociologist Mary McIntosh’s influential article, “The Homosexual Role” (1968).

35 British Society for the Study of Sex Psychology, Policy and Principles: General Aims, publication no. 1 (London, 1914), 1.

36 British Society for the Study of Sex Psychology, The Social Problem of Sexual Inversion, publication no. 2 (London, ca. 1914).

38 Bennett, “Discussion on the Social Aspects of Homosexuality,” 585.

46 The classic American statement about the role of mothers in contributing to the social problem of homosexuality in the 1950s—and thus to the moral breakdown of society—is the study by Kardiner, Abram, Sex and Morality (Indianapolis, 1954)Google Scholar.

51 Leznoff, >Maurice and Westley, William A., “The Homosexual Community,” Social Problems 3, no. 4 (April 1956): 257–63CrossRefGoogle Scholar, quotations at 257. To this point in the 1950s in Britain, only two works broached the social investigation of homosexual groups: Michael Schofield’s Society and the Homosexual (London, 1952) and Mass-Observation’s so-called “Little Kinsey” report (1949), both discussed later.

53 For a discussion of the “race relations” paradigm in Britain in the 1950s, see Waters, Chris, “‘Dark Strangers’ in Our Midst: Discourses of Race and Nation in Britain, 1947–1963,” Journal of British Studies 36, no. 2 (April 1997): 207–38CrossRefGoogle Scholar. Michael Schofield admitted his own debts to that paradigm in A Minority: A Report on the Life of the Male Homosexual in Great Britain (London, 1960), esp. 189–91. For the Chicago School and American sociological investigations into homosexuality, see Heap, Chad, “The City as a Sexual Laboratory: The Queer Heritage of the Chicago School,” Qualitative Sociology 26, no. 4 (December 2003): 457–87CrossRefGoogle Scholar. For a comprehensive set of foundational texts in the sociology of homosexuality, see Plummer, Ken, ed., Sexualities: Critical Concepts in Sociology, vol. 1, Making a Sociology of Sexualities (London, 2002), espGoogle Scholar. chap. 7, E. W. Burgess, “The Sociologic Theory of Psychosexual Behavior.” Burgess was also the author of the opening statement of principles in the inaugural issue of Social Problems, quoted above.

56 Chesser, Eustace, “Society and the Homosexual,” International Journal of Sexology 7, no. 4 (May 1954): 214Google Scholar. Later in the decade, in response to the publication of the Wolfenden Report, Chesser would develop these ideas in Live and Let Live: The Moral of the Wolfenden Report (London, 1958). During the Second World War, Chesser had published his classic study, Love without Fear: A Plain Guide to Sex Technique for Every Married Man (London, 1940).

58 Report of the Committee on Homosexual Offences and Prostitution(London, 1957). On the Wolfenden Committee and the discovery of the social world of homosexuality, see Mort, Frank, “Mapping Sexual London: The Wolfenden Committee on Homosexual Offences and Prostitution,” New Formations 37 (Spring 1999): 92–113Google Scholar, and Capital Affairs, 151–72. See also Houlbrook, Queer London, 254–61.

69 Westwood [Schofield], Society and the Homosexual, 4.

75 Westwood [Schofield], Society and the Homosexual, 136.

77 Hornsey, The Spiv and the Architect, 28; see also 117–19, 131–35. Harry Oosterhuis has also demonstrated the complex ways in which Richard von Krafft-Ebing’s psychology of the individual homosexual in the late nineteenth century was itself shaped in dialogue with his subjects: Ooosterhuis, , Stepchildren of Nature: Krafft-Ebing, Psychiatry, and the Making of Sexual Identity (Chicago, 2000)Google Scholar.

79 Walker, Kenneth, Sexual Behaviour Creative and Destructive (London, 1966), 11Google Scholar. For the funding of Schofield’s work, see also 225–27. Schofield later wrote that he was more apt to receive funding for his work when he said he was undertaking a British Kinsey report; see his comments in Nardi, Peter M. and Schneider, Beth E., eds., “Kinsey: A 50th Anniversary Symposium,” Sexualities 1, no. 1 (February 1998): 83–106CrossRefGoogle Scholar.

82 Savage, , Identities and Social Change, 236. Schofield himself also wrote about the new practices, and how to undertake them, in his Social Research (London, 1969)Google Scholar.

86 Kenneth Plummer found “dubious value” in Hauser’s classifications, roundly condemning his book: Plummer, , Sexual Stigma: An Interactionist Account (London, 1975), 97Google Scholar. At the time, D. J. West both condemned his sampling methods and his classifications but praised him for his reproduction of the candid views expressed by the men he interviewed: West, , “Which Homosexual Society?” Man and Society 2, no. 1 (1962): 32Google Scholar.

88 Schofield, Michael, Sociological Aspects of Homosexuality: A Comparative Study of Three Types of Homosexuals (London, 1965), 147Google Scholar. For a slightly earlier discussion of the problems faced by the social sciences in the study of homosexuality in Britain, see Westwood, Gordon [Schofield, Michael], “Problems of Research into Sexual Deviations,” Man and Society 1, no. 1 (Spring 1961): 29–32Google Scholar.

96 Wolff, Charlotte, Love between Women (London, 1971), esp. chap. 8Google Scholar. For the ways in which the Minorities Research Group, the 1960s lesbian organization in Britain, sought to open a dialogue between its members and researchers like Wolff, see Jennings, Rebecca, Tomboys and Bachelor Girls: A Lesbian History of Post-War Britain (Manchester, 2007), esp. chap. 5Google Scholar.

100 Weeks, Jeffrey, “Mary McIntosh and the ‘Homosexual Role,’” in his Making Sexual History (Cambridge, 2000), 54Google Scholar. For her influence on his early work as a historian, see Jeffrey Weeks, Coming Out: Homosexual Politics in Britain from the Nineteenth Century to the Present, rev. ed. (London, 1990 [1977]), xi. McIntosh’s article “The Homosexual Role” first appeared in Social Problems 16, no. 2 (Autumn 1968): 182–92. For the article and her subsequent reflections on it, see Plummer, Kenneth, ed., The Making of the Modern Homosexual (London, 1981), 30–49Google Scholar.

103 Plummer, Sexual Stigma, 199; see also 3 and vii where, despite his criticisms, he thanked Schofield for kindling his interest in sex research.