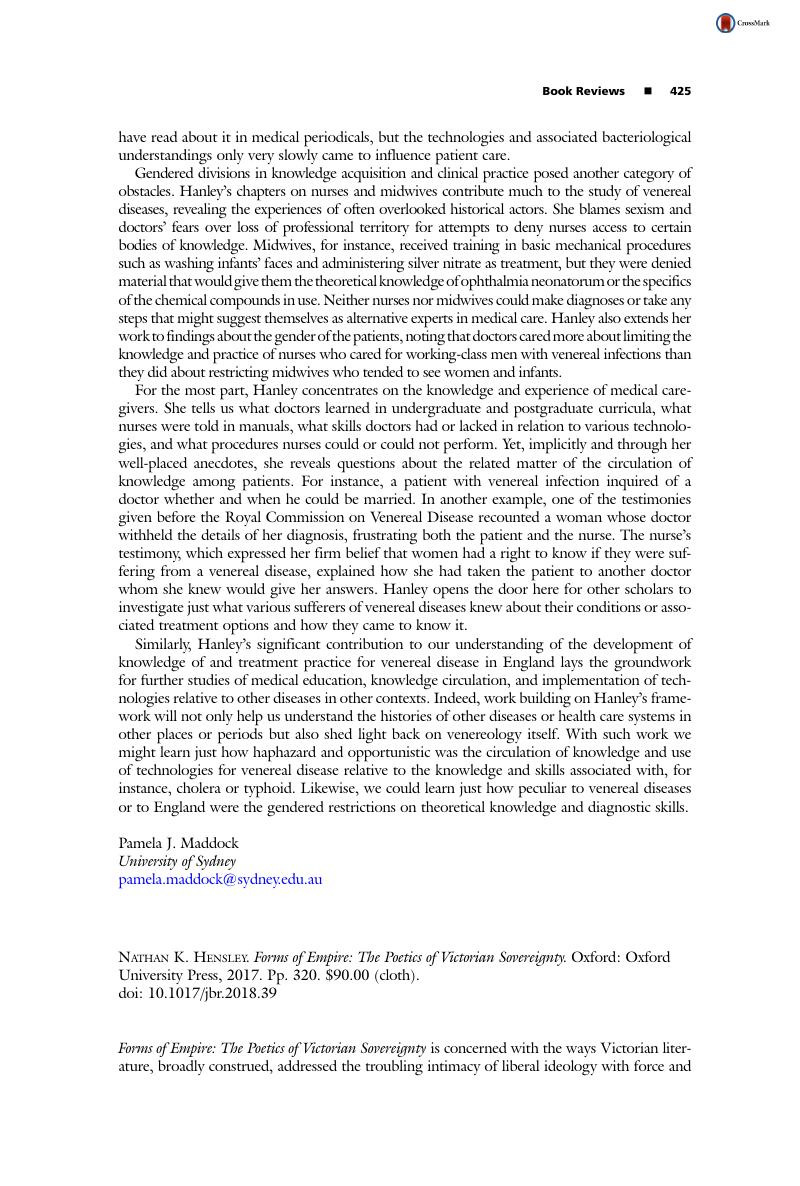 An abstract is not available for this content so a preview has been provided. To view the full text please use the links above to select your preferred format.
Type
Book Review
Information
Journal of British Studies , Volume 57 , Issue 2 , April 2018 , pp. 425 - 427
DOI: https://doi.org/10.1017/jbr.2018.39[Opens in a new window]
Copyright
Copyright © The North American Conference on British Studies 2018

Forms of Empire: The Poetics of Victorian Sovereignty is concerned with the ways Victorian literature, broadly construed, addressed the troubling intimacy of liberal ideology with force and violence. Nathan Hensley draws upon, among many other things, Walter Benjamin's notion of the “mythic violence” that destroys one social order and founds another, a violence that remains in potential during the seemingly peaceful duration of the new order and flares out among those not covered by the order's law (71–72). He reads texts by George Eliot, Wilkie Collins, Algernon Swinburne, H. Rider Haggard, and others as rejecting progressivist narratives of historical evolution such as J. S. Mill's and Henry Maine's, according to which humanity (in some societies) exchanges savagery for civilization, force for right, status for contract, submission for consent. Each of the writers studied uses the properties, the limitations and “affordances,” of her particular form to stage the inevitable shadowing of liberalism's law by “the raw, extralegal force that authorizes any regime of legality” (42). Hensley calls upon an impressive range of pertinent primary and secondary texts, ranging from political theory to poetry, prose fiction to philosophical logic and geology, not to mention works in other media such as photographs, manuscripts, cartoons, and sketches. Well written, bracingly argued, replete with insights, the book is a significant achievement. It is not perfect: there are a number of glitches, such as an incorrect title for Max Weber's most famous book, a missing entry among the works cited, and serious overuse of the word disclose to name what texts do. These are minor, if distracting, matters. Of greater weight is the matter I address at the close of this review, arising from the strength of Hensley's devotion of the critique of Enlightenment. If you retain even a heavily qualified appreciation for ideas associated with Enlightenment liberalism, you are in for a rough time.

After its thoughtful introduction, Forms of Empire is organized into two parts, “Equipoise” (on the British domestic scene) and “And Elsewhere” (overseas). Chapter 1, “Time and Violence in the Age of Equipoise,” works through Mill and Maine along with Lyell's gradualist geology, moving on to a reading of Eliot's The Mill on the Floss (1860) that features an illuminating close analysis of the novel's controversial conclusion and its temporal framing. Writing of the flood scene that has offended many readers as a monstrous improbability, Hensley reads the not-quite-described deaths of Tom and Maggie as “a transcoded revolutionary event” deliberately rupturing the domestic realism preceding it, an instance of Benjamin's “mythic,” epoch-making violence. Chapter 2, “Reform Fiction's Logic of Belonging,” begins with responses to the Census of 1841 and with Mill's attempts to explain induction in his System of Logic (1843), examining the “departicularizing” violence that, in the first, converts people into numbers and, in the second, turns single cases into instances of a generalization. The chapter also considers the violence of “abandonment” whereby political or logical systems “extroject” some from inclusion in the rights-bearing populace or set. In a variation on the Wildean quip, Hensley observes that “the only thing worse than counting is not to count at all” (90). This second chapter then treats Collins's Armadale as “tracing connections between an older circumatlantic slavery and a newer, equally violent cosmopolitanism (personified in Lydia Gwilt)” (113)—connections that put paid to the progressivists’ historical optimism.

In chapter 3, Hensley puts forward perhaps his boldest argument. “Form and Excess, Morant Bay and Swinburne” does not merely offer a bravura reading of Swinburne's seemingly apolitical, aestheticist early verse as “political thought enacted in form” (139); it offers striking, updated reflection on the abiding question of method (Morant Bay = base/history; Swinburne = superstructure/culture). Along the way, the chapter reads James Fitzjames Stephen's rejoinders to Mill and Maine: “Stephen saw in theory what the practice of martial law [such as unleashed in Jamaica] made concrete: that the brute force on the world system's periphery was no ‘accidental disturbance[e] of right theory’ … but the necessary precondition of the mid-Victorian global order” (172). This vision Swinburne encoded in verse, “exploit[ing] the affordances of the poetic medium to stage the seemingly self-contradictory involvement of legality and atrocity as a generative friction between form and content” (184). Finally, chapter 4, “The Philosophy of Romance Form,” focuses on the losing side of the “realism wars” of the late nineteenth century, that side represented by H. Rider Haggard and his promoter, the polymath Andrew Lang. Where William Dean Howells and Henry James “translat[ed] the cognitive dispensation of individualized, interiorized modernity into fictional form” (208), Lang and Haggard preferred a fictional world rigorously externalized (on the model of Homer), organized on romance principles. Hensley reads Haggard's King Solomon's Mines as “disclos[ing] a secret compact between the moral discourse of liberal nation-building [in the colonies] … and a visceral exultation in death,” refusing to prize apart the supposedly ameliorative and violently expropriative aspects of liberal empire. The chapter concludes, as of necessity, with Robert Louis Stevenson's Jekyll and Hyde (1886), literature's most famous two-in-one, for Hensley the dialectical image reminding us that modern liberal reason and lawfulness and atavistic, epic violence “are two names for the same thing” (241).

As I have suggested, Hensley's book exhibits considerable self-awareness about method. Its originality does not lie in its attitude of suspicion toward the now routinely abused “hermeneutics of suspicion” in which “historical texts are cast as symptoms of a cultural or political condition that later literary critics … might diagnose in a heroic mode” (19). The originality emerges from Hensley's perception that the habit of seeing texts as “naively ideological” and critics as diagnosticians “recapitulates the idealist progressivism” he examines in the book (11): critic and liberal subject alike purport to have attained distanced perspective on the condition text and preliberal subject inertly manifest. Instead, Hensley proposes a critical prosopopoeia, regarding his objects of study as actively engaged in putting the affordances of their various forms to work “to generate concepts in excess of the ideological inputs that produced them” (19). This emphasis on the active labor of form accounts for the “poetics” in the book's subtitle: with regard to both the materials studied and the study itself, the goal is “to recover the poetic as a category of knowledge-making” (129). The book effectively demonstrates that “literature does not recapitulate thought; it is itself thought” (83).

Yet Hensley is not immune from condescension toward the past. For the hermeneutics of suspicion's oblivious historical text, he substitutes other benighted figures, chiefly all those Victorian proponents of liberalism who failed to see the brutality supposedly inscribed in their cause, but also including recent critics who have had anything good to say about liberal ideas. Amanda Anderson is dismissed in a sneering footnote, and a further footnote characterizes those who participated in the revaluation of such concepts as critical distance, detachment, or reflective agency as “the ideological forward wing … of the militarized neoliberalism” emerging in the George W. Bush years. “[T]he polemical reanimation of the Enlightenment's conceptual legacies,” we read, “showed how fully critical practice could be coopted by what Edward Said calls ‘the realities of power and authority’ that it is the office of criticism to contest” (273–74). This “polemical reanimation” turns the scholars Hensley scorns into Frankensteins resurrecting a wicked liberalism that ought to have stayed in its tomb, preferably with a stake through its heart. At the risk of being counted among the imperialist stooges, I will conclude by saying that I dislike these illiberal remarks, which mar an otherwise commendable book.