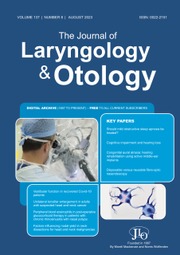 A prospective study of 50 selected patients with mucosal-type bilateral chronic otitis media was conducted. All patients underwent transperforation myringoplasty on the side that met the inclusion criteria and tympanoplasty on the contralateral side. Graft uptake and hearing improvement were evaluated after 6 months.

This procedure offers perforation closure in a single sitting to patients with bilateral chronic otitis media who meet the inclusion criteria.

In transperforation myringoplasty, a defect in the tympanic membrane is closed via the perforation using a transcanal approach without tympanomeatal flap elevation. In the present study, selected patients underwent simultaneous bilateral surgery comprising tympanoplasty with cortical mastoidectomy on the side with more severe disease (i.e. the contralateral side) and transperforation myringoplasty on the so-called inactive side (i.e. the study side). All patients were evaluated at the six-month follow up.

This prospective study included 50 patients with bilateral mucosal-type chronic otitis media who attended the out-patient department of a tertiary care hospital from December 2012 to November 2014.

Inclusion criteria were: (1) the patient should be willing to undergo concomitant bilateral ear surgery; (2) the tympanic membrane has a small to medium-sized central perforation with no active discharge from the middle ear on one side; (3) pure tone audiometry shows a hearing threshold of 40 dB or less (to rule out ossicular problems); and (4) there should be no active disease in the nose. Exclusion criteria were: (1) a very narrow external auditory canal, impairing transcanal visualisation of the perforation; (2) the tympanic membrane shows subtotal perforation, a marginal perforation, an attic perforation and atticoantral disease, or active discharge from the middle ear; and (3) a hearing threshold of more than 40 dB.

Written informed consent was obtained from all patients who met the inclusion criteria and were willing to participate in the study. A detailed medical history was taken for each patient, followed by a thorough microscopic examination of the ears. All findings were recorded systematically. Symptoms on the study side were ear discharge, either alone (24 per cent) or combined with hearing loss (76 per cent).

All surgery was performed under general anaesthesia by the same otosurgeon (the senior author). A post-auricular incision was first made in the contralateral ear and a graft large enough for bilateral grafting was harvested and prepared. After completing standard tympanoplasty on the contralateral side, the study side was prepared for transperforation myringoplasty. The microscope was adjusted to focus on the perforation and visibility of the entire perforation margin was confirmed (Figure 1). The margin was trimmed and freshened using a curved needle and cup forceps (Figure 2). The undersurface of the drum remnant was abraded with a round knife. The entire middle ear was then filled with Gelfoam® (impregnated with antibiotic solution) and a graft bed was created (Figure 3). The fascia graft was cut to the correct size and shape, and then carefully placed medial to the drum remnant to completely cover the perforation. By gentle manipulation with an elevator, the graft was tucked under the drum remnant, which was then evened out with a gimmick (annulus elevator; Figures 4 and 5). The Gelfoam® was kept over the graft and covered with a light antibiotic ointment pack for support. All patients were given systemic antibiotics peri-operatively. The antibiotic pack was removed after a week. 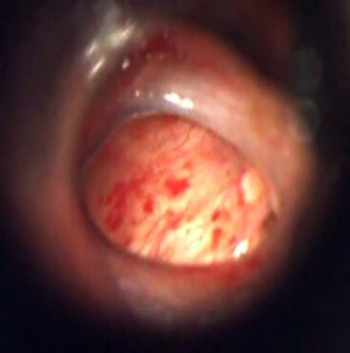 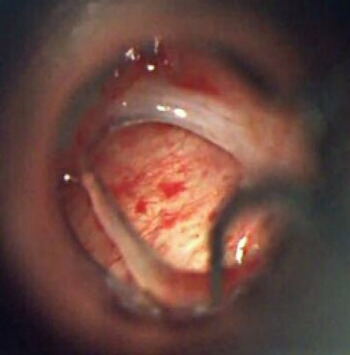 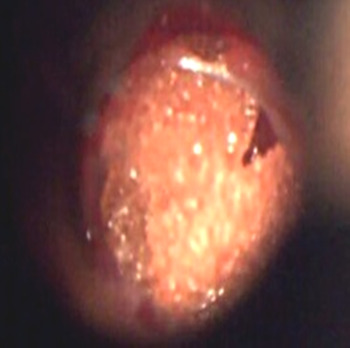 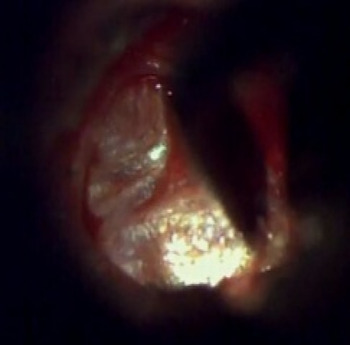 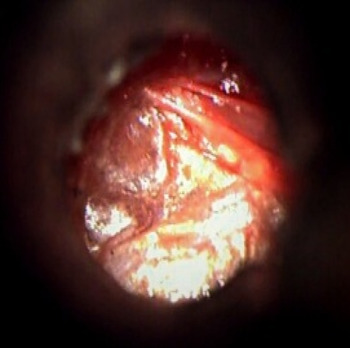 Graft uptake was successful in 86 per cent of patients (43 out of 50) after 3 months and in 82 per cent (41 out of 50) after 6 months. Both of the patients who lost the graft after three months had developed an infection and tympanic membrane perforation.

At the end of follow up, all patients with pre-operative pure conductive loss and post-operative graft closure (n = 38) recovered normal hearing with a PTA value of less than or equal to 15 dB. The other patients with successful graft uptake (n = 4) had higher PTA values due to a sensorineural component that was present before surgery. Patients with successful graft uptake (82 per cent) had full ABG closure after six months. The graft failure group comprised four patients with unchanged ABGs and five with ABG closure of 3–8 dB.

In the graft failure group, the defect was present in either the posterosuperior or anterosuperior aspect, possibly due to medialisation of the graft. For most patients, the perforation size was decreased which reduced the amount of middle-ear mucosa exposed to the external environment. Further, hearing was improved and there was a lower incidence of ear discharge post-operatively.

Cost and time savings for patients who underwent single sitting surgery with successful graft uptake were compared with those associated with undergoing tympanoplasty at a later date (i.e. in two sittings). At the Jubilee Mission Medical College and Research Institute, the cost of transperforation myringoplasty is around 12 per cent of the cost of tympanoplasty because it is performed as combination surgery using a simpler technique. Therefore, if this treatment is successful, patients save 88 per cent of the cost of second sitting tympanoplasty and avoid the additional costs of medication and a second hospital stay. However, those with graft failure had a financial loss of 12 per cent of the tympanoplasty cost. In this study, none of the patients with graft failure was upset about losing money because they considered this a small price to pay for attempting this surgical approach. Most were satisfied with their post-operative hearing improvement and absence of ear discharge.

Bilateral chronic otitis media is considered a double burden for patients because they have to undergo two hospital stays and face additional risks to obtain a dry ear and improved hearing. In general, otosurgeons are reluctant to perform bilateral surgery in a single sitting because of the longer surgical duration, difficulty in changing the position of the surgical team (i.e. surgeon and assistants) and equipment, and the reported risk of iatrogenic sensorineural hearing loss. However, on balance, simultaneous transperforation myringoplasty on the side less affected by disease could be effective for selected patients with bilateral chronic otitis media.

El-Ahl et al. operated on 30 patients (60 ears), with successful perforation closure in 56 ears (93.3 per cent) and residual perforation in the other 4 ears.Reference El-Ahl, Amer and El-Anwar 8 In all, 26 patients had successful bilateral graft uptake. Mane et al. reported outcomes for 14 patients (28 ears) who underwent bilateral type I tympanoplasty.Reference Mane, Patil, Mohite and Varute 9 A post-aural approach was used for 5 ears, and an endaural or endomeatal approach was used for the other 23. The underlay technique was used for all ears: the graft material was fascia lata for 10 patients and temporalis fascia for 4. The overall graft uptake rate was 96 per cent. Ansari et al. reported the outcomes for 30 patients who underwent bilateral type I tympanoplasty: successful closure of the tympanic membrane perforation was achieved in 56 out of 60 ears.Reference Ansari, Khayani, Farrukh, Kashmiri and Farooq 10

Rai et al. assessed the surgical outcomes for 60 patients, of whom 30 had unilateral disease and 30 had bilateral diseaase.Reference Rai, Singh, Sahu, Singh and Arora 11 All patients underwent type I tympanoplasty using the post-auricular inlay technique using a temporalis fascia graft. Graft uptake rates of 90 per cent and 93 per cent were achieved in the unilateral and bilateral surgery groups, respectively. Wang et al. reported the outcomes of bilateral single sitting myringoplasty in 22 patients, along with 40 monoaural control patients.Reference Wang, Yu, Shan, Zhang, Zhao and Long 12 The closure rate for tympanic membrane perforations was 93.2 per cent (41 out of 44 ears).

Kim et al. compared three subgroups of patients who underwent bilateral mastoidectomy, unilateral mastoidectomy with contralateral tympanoplasty, and bilateral tympanoplasty.Reference Kim, Lee, Park, Kwon, Kim and Lee 13 A total of 85 patients with chronic otitis media or cholesteatoma underwent bilateral single sitting surgery. The results of hearing tests did not differ significantly among the three groups except for hearing gain in the bilateral tympanoplasty group vs the contralateral tympanoplasty group (p = 0.033). The graft uptake rate for single sitting bilateral surgery was 90–96 per cent, which is higher than the 82 per cent success rate achieved in the present study. The higher success rate may be due to tympanomeatal flap elevation, which allows a more meticulous procedure. Despite this, the present study reported the second highest number of single sitting bilateral ear surgical procedures so far, next to Kim et al.Reference Kim, Lee, Park, Kwon, Kim and Lee 13

The present study had the following notable findings. Firstly, transperforation myringoplasty involves minimal manipulation of the middle ear, which minimises the peri-operative injury risk. Hence, even if there is an element of sensorineural hearing loss (as reported for bilateral cases), the risk is definitely reduced. Secondly, even if the graft fails, there is still a chance for tympanoplasty at a second sitting. In the present study, the two patients with graft failure opted for a second surgical procedure during the study period. Since tympanomeatal flap elevation had not been performed in these patients, there was no tissue fibrosis and revision surgery was therefore as straightforward as in a fresh case. More importantly, no waiting period was needed before performing tympanoplasty on the same side. Thirdly, the procedure is relatively simple and does not require a high level of surgical skill. It can be completed within 20 minutes using graft material harvested and kept for tympanoplasty on the other side. Fourthly, operative and post-operative morbidity is reduced. A post-aural incision for graft harvesting is made on only one side; hence, no incision or heavy dressing is needed on the transperforation side. Further, only a small external auditory canal pack is necessary, and this can be removed after a week. All patients in this study found that hearing impairment due to the bilateral ear pack was modest and acceptable. Finally, bilateral procedures can be performed in a single sitting, which avoids a second exposure to anaesthesia and a hospital stay, reduces the length of absence from work, and reduces the burden on the healthcare system.

With the growing use of endoscopic ear surgery, simultaneous bilateral procedures may become more popular among both surgeons and patients.