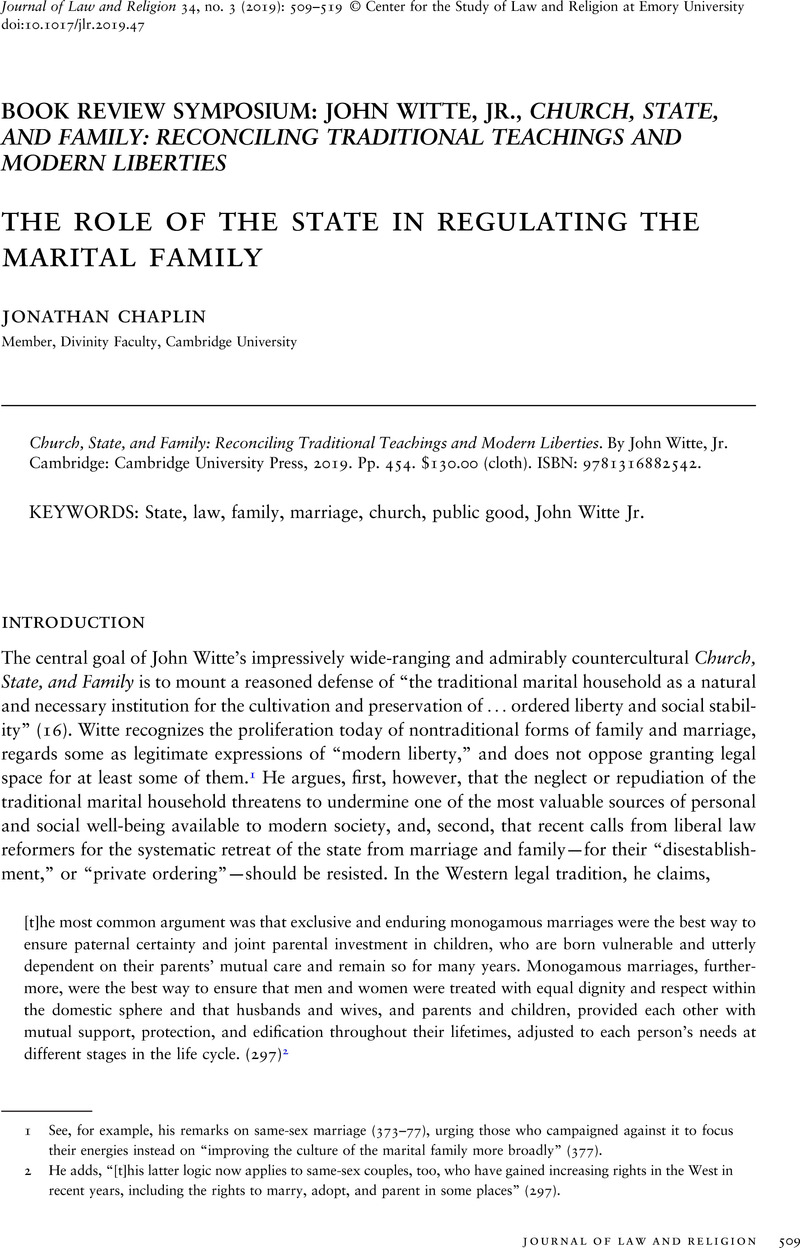 COPYRIGHT: © Center for the Study of Law and Religion at Emory University 2020

1 See, for example, his remarks on same-sex marriage (373–77), urging those who campaigned against it to focus their energies instead on “improving the culture of the marital family more broadly” (377).

2 He adds, “[t]his latter logic now applies to same-sex couples, too, who have gained increasing rights in the West in recent years, including the rights to marry, adopt, and parent in some places” (297).

3 These are overlapping clusters of concerns rather than tightly defined categories.

5 Witte explains that this “integrative” model was the outcome of a “2,500-year running philosophical argument in the West about the nature and purpose of sex, marriage and family life” (4), beginning in the Greco-Roman period, continued in Christianized terms in the middle ages, and extending through the Reformation and well in to the Enlightenment.

6 Cumulatively, these changes have both reflected and furthered a series of “separations:” between marriage and sex, childbirth and childrearing, and between childbirth and parenting, intercourse and biological filiation (3; see 235–36). Some of these separations are, he implies, proper consequences of modern liberties, while others are placing the future of the marital family in jeopardy.

7 Yet he also argues that such departures are themselves in large part fruits of, not repudiations of, the developing Christian tradition. See, for example, Witte, John, The Reformation of Rights: Law, Religion and Human Rights in Early Modern Calvinism (Cambridge: Cambridge University Press, 2007); Witte, John, God's Joust, God's Justice: Law and Religion in the Western Tradition (Grand Rapids: Eerdmans, 2006).

8 Some contemporary liberal egalitarians are also perfectionists—Stephen Macedo, for example, whom Witte cites appreciatively at 210.

9 He adds, “[a] family-law system must address the natural sexual realities of the entire population, even if our media are fixated on the more sexually adventuresome and exotic” (197).

10 Indeed, it would seem that the church offers supportive narratives, practices, and resources that enable its members to enjoy the rewards of all three of the dimensions so far treated.

11 Some of these are also discussed under the “social” dimension, for example at 198.

12 This is a conclusion many liberals would share. See, for example, Laborde, Cécile, “State Sovereignty and Freedom of Association,” chap. 5 in Liberalism's Religion (Cambridge: Harvard University Press, 2017). They might not share his strong endorsement of a public role for faith-based organizations.

13 The state can also offer additional legal options above and beyond ordinary contractual marriages, such as the “covenant marriages” recognized in a few American states, chosen by those seeking more demanding standards of marital commitment. These are harder to enter and exit but would be wholly voluntary (312). The church could play a role in supporting the parties to such a marriage.

14 The same balancing act is attempted in treatment of shared jurisdiction with charities and schools (315–18), with the rights of ministerial solemnization (318–28), and with religious arbitration as a method of dispute resolution (328–37).

15 This supportive network is one of the goods put at risk by ideas of “private ordering” (370).

16 Somewhat oddly, perhaps, the social dimension also includes the state, which, however, is present directly or indirectly in all six dimensions.

17 Witte shows how the economic dimension, like the natural and social, is again being rediscovered today, in this case by a variety of economic theories such as rational choice theory, institutional economics, and behavioral economics.

18 The work of institutional economist Margaret F. Brinig is being cited here.

19 I note that these “nudges” are more sophisticated instances of the less direct, prescriptive, or censorious legal methods that Witte identifies in his historical accounts of state regulation of the family and that I term “discouraging” and “affirming.” Nudge theory, then, is not all that new.

20 This is not an entirely felicitous category either, since the state shows up, indirectly or directly in all categories and yet operates essentially through law everywhere.

21 Consent came to be seen as a “civil contract” (218) but marriage was traditionally seen as much more than that. Witte notes that Calvin asserted it was “more than a contract, but it is not less than a contract” (cited at 216).

22 Equally, discussing children's rights, he says, “the state does not create the family or the rights of parents and children; rather, the family has preexisting natural rights that are recognized and affirmed by positive law” (256).

24 He spends the bulk of the chapter dismantling the arguments of Christians (mostly conservative Evangelicals) who resist this move on the grounds that children's rights are already adequately protected by existing family law and by the American constitution and that an extension would threaten parental authority.

25 Some, however, such as the rights to recreation, rest, and play, might struggle to be defined in a justiciable way—rather like the UNCHR's notorious provision of a “right to paid holidays.”

26 Witte thus critiques the US Senate for opposing ratification of the UNCRC and favors “qualified ratification” (242), perhaps entering “reservations, understandings, and declarations,” as several other state parties have (246, 251). He offers a balanced assessment of the UNCRC and suggests a number of such “reservations” intended to safeguard parental authority or mitigate against convention “overreach” (273). Witte would add to the UNCRC's list of rights, the right to life of “prenatal children” (242), and he adopts what he calls a “moderate and unsophisticated middle-way position” on abortion (271). He also supports the convention's proscription of “corporal discipline” (253).

27 Witte appeals again to the “expressive” role of law here: Criminal laws against polygamy “play an important symbolic and teaching function that the state and its family laws still play in our lives” (294).

28 I note too that Witte's concern is with state law, and that the state, while always acting through law, has other policy instruments at its disposal.

30 Wolterstorff, Nicholas, “The Rights-Limited State,” chap. 13 in The Mighty and the Almighty: An Essay in Political Theology (Cambridge: Cambridge University Press, 2012).

Journal of Law and Religion
×

Journal of Law and Religion
×