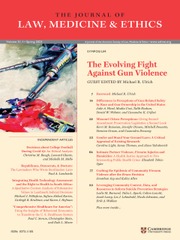 Towards Racial Justice: The Role of Medical-Legal Partnerships

Medical-legal partnerships (MLPs) integrate knowledge and practices from law and health care in pursuit of health equity. However, the MLP movement has not reached its full potential to address racial health inequities, in part because its original framing was not explicitly race conscious.

Towards Racial Justice: The Role of Medical-Legal Partnerships
×

Towards Racial Justice: The Role of Medical-Legal Partnerships
×

Towards Racial Justice: The Role of Medical-Legal Partnerships
×
×