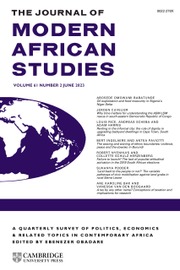 Within a period of just a year during the late 1980s, the Ethiopian Revolutionary or ‘Red’ Army suffered serious defeat in both Eritrea and Tigray. Although numerically and technically superior to its opponents, dissension in the army's ranks, political meddling from Addis Ababa, loss of will, and the remarkable skill and determination of its opponents prevented it from achieving victory. Two years after its humiliating defeat in Tigray, the army collapsed, and the military regime it had sustained disappeared. Eritrea succeeded in declaring its independence and the Tigrayan rebels seized power in Ethiopia. This article demonstrates that the Eritrean and Tigrayan forces ultimately won because they had grass-roots support and because they were able to back each other militarily and politically. In the meantime, the dictatorship in Addis Ababa was losing popular support as its ‘citizens’ were no longer willing to make the sacrifices that were necessary to continue the struggle. Only by considering these points can we appreciate why Africa's second-largest army was annihilated or, conversely, why the insurgents triumphed, for their success was not inevitable.